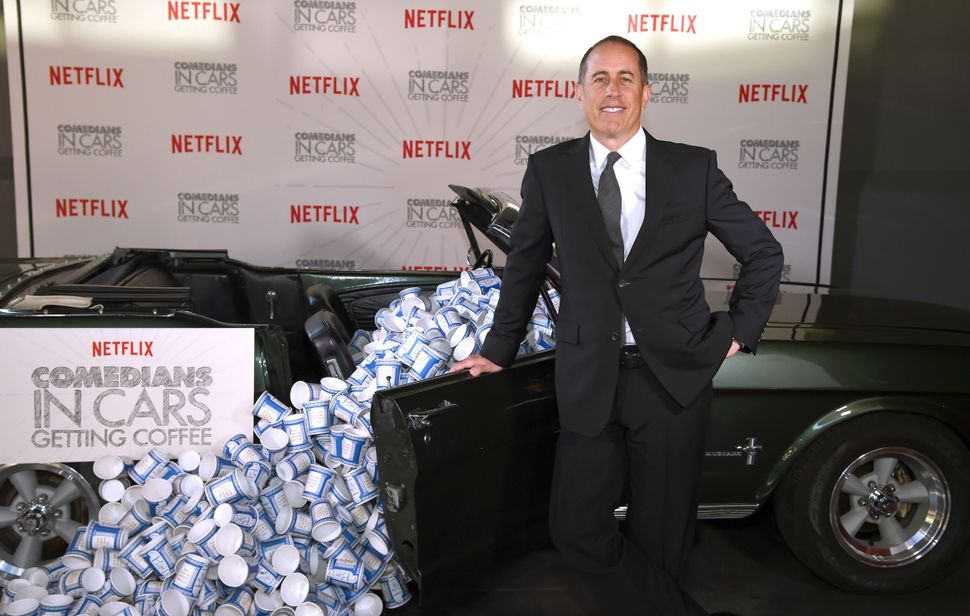 Your grandpa Jerry Seinfeld, on an outing from his nursing home Image by Getty Images

Jerry Seinfeld is as synonymous with American Jewish culture as a bagel and lox. He stands for successful acculturation without total assimilation. He is the spokesperson for contemporary Jewish comedy and is perhaps the most outwardly Jewish celebrity. He represents us.

And in each under-20-minute episode, Seinfeld picks up a comedian in an interesting vehicle, drives him or her to a coffee shop, and shoots the breeze. Seinfeld, who has made it clear since early on in his career that he cares for nothing more than comedy, tends to steer both the car and the conversation.

“I would appreciate if you were not so suggestive in the white-hot radioactive sexual misconduct world we now live in,” he jokes to McKinnon when she picks up his call and asks un-ironically if she should “come to the car.”

He takes a similar tact with Dana Carvey. Pointing at Carvey’s hotel, the Peninsula Beverly Hills, he intones, “You know, Harvey Weinstein is in there.” The substance of the joke is that the hotel considered the “headquarters” for many of Weinstein’s alleged attacks on women. Carvey grabs hold of the Weinstein bit and starts to make a joke about the way celebrities have used Weinstein’s fall as a way to show off their compassion, but Seinfeld grabs the bit back, laughing joyfully that he is “not surprised” about Weinstein. Carvey looks confused.

With Baldwin, one of Seinfeld’s only repeat guests in 10 seasons, both men take pleasure in joking about #MeToo. The friends snicker over the idea of treating their partners with more consideration post-MeToo. Together, they lament the fact that it’s “a new world now between men and women.”

These jokes, about the decline of male supremacy, Seinfeld makes the most of with his older, white male guests. In a music store with Carvey, Seinfeld reminisces about a joke he made about Paul McCartney at the White House in 2010. “I did a bit about ‘She was just 17 if you know what I mean,’” Seinfeld laughed, referencing the Beatles song McCartney wrote when he was 20. “I said, ‘I think I do know what you mean and I think there’s some law enforcement here in DC that might like to have a little talk with you about what you mean.”

Imagine being one of the most famous comedians in the world, being asked to go to the White House to entertain Paul McCartney and Barack Obama, having months to prepare, and then making a joke about statutory rape that you think is so funny, you repeat it eight years later.

It’s not that serial sexual assault and statutory rape can’t make good joke material — plenty of comedians have done it, usually by way of innovative observation that diminishes perpetrators and not victims. Seinfeld’s method is to bring up one of these topics and then vaguely chuckle at the fact that they get so much attention, so much sensitivity from the public.

The jokes are in bad taste, but worse, they’re not even jokes. They’re un-funny, random musings by an aging man growing increasingly irrelevant. “Isn’t it amazing that anybody could have trouble finding an apartment in New York?” Seinfeld asks McKinnon, pointing up at the multimillion dollar apartments on a prime corner of the Upper West Side. “It looks like there’s a lot of them.”

Back in the music store, Carvey does a painfully funny impression of Neil Young singing Christmas music. Afterwards he plucks at the strings for a moment, segueing into a new joke. Seinfeld can’t stand the silence. “Why do I feel like a girl and you’re hitting on me?” he demands. “It’s just I feel so uncomfortable right now. You’re looking me in the eye and playing guitar.”

With younger comedians, Seinfeld tries his new, most cutting-edge material: “What do you think about a ventriloquist dummy who’s a paraplegic?” he asks McKinnon, probably since, due to McKinnon’s identity, gay jokes and women jokes are off the table. In a moment of silence in the car, he blares at Galifianakis, “It’s so weird that colleges have become this place of restricted thought as opposed to thought freedom!”

Yes, it is weird that a person who went to college almost fifty years ago would use a comedy show to air his personal hysteria about this mostly imagined issue. It is weird for an otherwise charming and affable man to feel the need to return again and again to jokes about serial sexual harassment and assault. It is weird that when I close my eyes and listen, one of the biggest names in comedy sounds like that elderly relative you have to mouth apologies for to service workers.