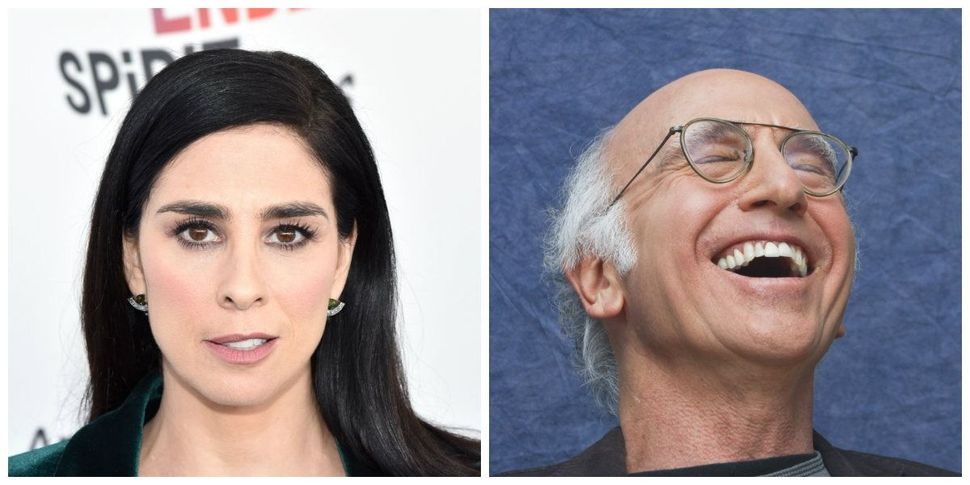 Sarah Silverman and Larry David, laughing all the way to the Emmys Image by GETTY IMAGES/FORWARD MONTAGE

The 2018 Emmy nominations dropped late Thursday morning. The Television Academy award show nominates, by our humble calculus, approximately 900 million people each year. Nevertheless, we have worked tirelessly to determine which people are people of the book.

Here are all the Jews and Jewish projects nominated in major categories:

Pamela Adlon, “Better Things” – the fantastic Adlon gets a nod for the show she also co-created, about the hilarious pain of being the single mother of three teenage girls.

Rachel Brosnahan, “The Marvelous Mrs. Maisel” – Let this be your annual reminder that the charming and talented Brosnahan is not, in fact, Jewish. We still adore her!

Lead Actor in a Comedy Series

Larry David, “Curb Your Enthusiasm” – the number one babe of Jewish comedy returned with a vengeance for [the 9th season(https://forward.com/schmooze/342705/breaking-jewish-news-larry-david-returning-to-hbo/) of HBO’s “Curb.”]

Lead Actress in a Drama Series

Evan Rachel Wood, “Westworld” – Evan Rachel Wood is a huge mensch and a huge talent. She deserves all great things in the world, and especially in the west world.

“The Daily Show with Trevor Noah” – Daily, we are pleased to remind you that Trevor Noah is indeed Jew-ish. Limited Series

“Godless” – “Godless” was created by fellow yid A. Scott Frank.

“The Marvelous Mrs. Maisel” – Quite Jewish, minus its star.

“This Is Us” – The creator of NBC’s infamous weeper is Dan Fogelman, one of our very own.

Actress in a Short Form Comedy or Drama Series

Megan Amram, an Emmy for Megan – Amram earns her first Emmy nomination, making a strong case for asking for what you want directly.

You can read the exhaustive, 68-page list from the Television Academy here.

These hard working Jews deserve them.