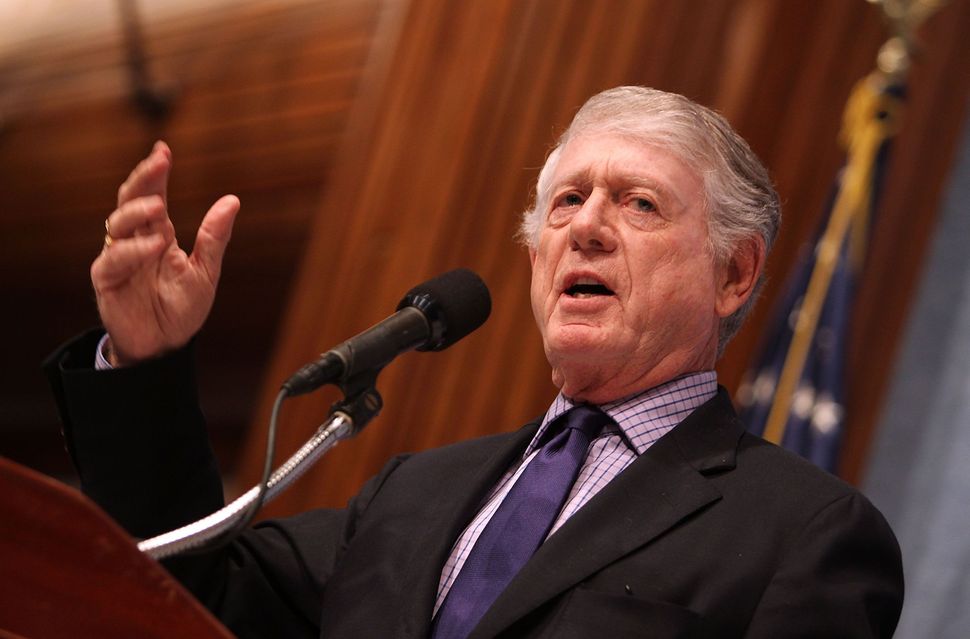 What do Ted Koppel, Donald Trump, Joe Walsh, Sarah Palin, and Dick Cheney all have in common? (Besides for the fact that they are all white, wealthy, political-like figures.)

They’ve all been duped by Sacha Baron Cohen for his new Showtime “Who is America” show.

The comedy star is up to his old tricks again and his subjects are not happy.

Just yesterday, Illinois Congressman, Joe Walsh, was lured into an interview with the disguised fraudster by thinking he was attending a pro-Israel honoree dinner. Walsh kept his cool, but threw him shade for hoaxing Sarah Palin as an impersonated disabled veteran, tweeting, “his tactics are disgusting.”

In response, Palin called him a “piece of sh**” via Twitter. And before we could hold our breath waiting for his next victim to come forward, we were hit with the news of Ted Koppel.

The broadcast journalist did not see this one coming. Before taking down Palin last November, the “disabled veteran” (for those who are not following along, this imposter is none other than Sacha Baron Cohen), showed up to Koppel’s home with a camera crew for his new Showtime series, “Who Is America.” They went so far as to email the 78-year-old under a pseudo-producer’s name, Julia Harris, asking if they could interview him for a new show called “The Age of Reason.”

My name is Julia Harris and I am working on a new project to be aired on Showtime called AGE OF REASON (working title). Our show features conversations with distinguished experts in science and public policy, highlighting the brightest and most reputable minds on today’s most important topics. Our show has been picked up for 6 episodes, and we are currently in production.

Our project’s goal is to cut through the noise and disinformation surrounding today’s most important issues in a way that’s clear and accessible to everyday Americans. As one of the world’s most well-respected media figures who has really seen it all throughout his career, we’d be thrilled to have Mr. Ted Koppel on our program.

As well as the many political points we would love him to help explain (immigration, health care, our current political state, etc.), we would love to hear Mr. Koppel’s personal story – his background and how that helped shape his views, and where he sees opportunities and obstacles ahead. We hope to make a real difference in elevating these conversations with facts and reason.

Our team is tentatively scheduled to shoot on Nov. 9th, 12th, and 14th in the Washington, D.C. area. Would Mr. Koppel have time to sit down with us on any of those dates? We’d love to tape with him for 30 mins to an hour if possible, but would be grateful for any amount of time he can spare. We would be happy to provide transportation to and from our studio and if he is not in the DC area, we can also provide a first class plane ticket.

Yet there were obvious holes in the wheelchair-bound interviewer’s story.

“Immediately the man began to get me to admit that the Trump inaugural crowd was the biggest ever. When I disagreed, he showed me a photograph on his laptop of a huge inaugural crowd and a man holding a digital clock on a pole,” said Koppel. “The clock said 11 p.m. My interviewer (Mr. Cohen, I gather) pointed out that if the crowd was that huge at 11, hours after the actual inauguration, it had to have been the biggest ever,” Koppel told Hollywood Reporter.

As it turned out, the picture which supposedly was taken at 11 p.m, appeared to be captured in broad daylight. Koppel knew something was wrong.

“He said, maybe it was an eclipse. And I said if it were an eclipse it would have been dark. And he said maybe it was an eclipse of the moon and the sun eclipsed the moon. I said, wait a second the sun is many millions of miles away from the moon. At that point, I realized something was really wrong. And that’s when I said, ‘Guys, I don’t want to be rude, you’re guests in my home. But we’re done. But break down and time to leave,” Koppel said.

We don’t know when Cohen’s next great scheme will strike, but if this continues we are thinking to start a Sacha Boran Cohen support group. Until then, the countdown for the new Showtime series debuting on July 15th has begun.

Bonnie is an intern for The Forward.