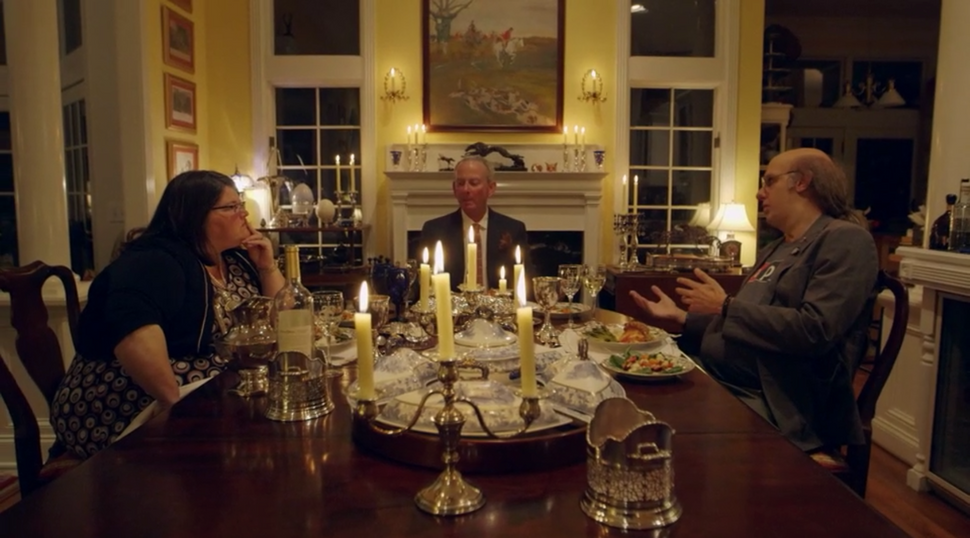 In Who Is America, Sacha Baron Cohen speaks with the Thompson family in Aiken, South Carolina. Image by Showtime Screenshot

Sacha Baron Cohen’s greatest skill is pushing people just far enough that they reveal their least savory opinions and attitudes — but only if they possess them in the first place.

On the first episode of Cohen’s much-hyped “Who Is America?,” we don’t get to see any of Sarah Palin, but we do see many Republican politicians spouting off opinions on weapons access that would make most gun owners (including this one) blush. This includes several sitting and former congresspeople whole-heartedly endorsing Cohen’s fake Israeli “kinderguardians” program that aims to arm “gifted” 4 and 5-year-olds with weapons. Of course, this is not a flattering position for any politician. Many are now claiming that they were “duped” by Cohen — Moore is even threatening legal action.

But the most revealing part of the first episode did not take place in Washington, DC, but in a sleepy corner of Aiken, South Carolina. Disguised as a balding, NPR obsessed granola-liberal, Baron Cohen heads to the home of Trump delegate Jane Page Thompson and her husband Mark. The visit occurs a few weeks after the November 2016 election, and the disguised Baron Cohen announces that he’s going to visit a family who “suffers from white privilege.” The Thompsons do indeed live in a beautiful home: the evening of Cohen’s visit, their house is illuminated by a soft glow with inviting porch lights. The inside walls are painted bright yellow and adorned with framed photos and the floor is covered by an elegant rug. Like any good Southerners entertaining company, the Thompsons are wearing their Sunday best: Mark is in a crisp suit with a pocket square, Jane is wearing a patterned dress and black cardigan. There are candlesticks all around the dining room, a marble fireplace near the head of the table and china on the Lazy Susan. Greeting Baron Cohen at the door, they look genuinely happy.

Not once in the entire episode do either Mark or Jane say anything racist, sexist, classist, LGBTQ-phobic or even impolite. While they unabashedly explain why they voted for Trump (he really wants to Make America Great Again and cares about jobs) and make it clear that they are practicing Christians, they demonstrate perfect graciousness. They respectfully let Cohen replace their traditional prayer before the meal with a “first people chant,” to which they bow their heads, listen respectfully and even respond to with an “amen.” When asked about gender roles, they explain to Cohen that Mark does all of the cleaning and the laundry while Jane does all of the cooking.

And it goes on: Jane stops her husband Mark from “passing judgement” on Baron Cohen a number of times — including after Mark tells Baron Cohen that it is “not appropriate” to let his child free bleed on the American flag when she gets her period. They politely listen to Cohen’s fantastical story about feeling “cuckolded” by a porpoise his wife took as a lover: “I empathize with those feelings,” Mark says. Rather than expressing disgust and passing judgement, the Thompsons ask polite questions about Cohen’s family situation, trying to get to the heart of it. Rather than acting as many liberals might expect Trump supporters to behave, they demonstrate exemplary hospitality. They are genuine people trying their best to connect with their extraordinarily odd guest.

Baron Cohen pushes the Thompsons to their limits, and they never once snap. After he leaves, someone out of frame asks the Thompsons about Baron Cohen’s value system, and Mark says into the camera that he believes, if he’s being “crudely honest,” that Baron Cohen’s value system is “f——-d up” — but I think that’s not a controversial position to hold after a dinner guest tells you that their wife has an animal lover, that they force their child to menstruate onto a flag and that they’ve installed “compliance cameras” to make sure that their son is not peeing while standing up.

The scene is certainly uncomfortable, and I wonder how the family feels about having their hospitality and trusting nature being taken advantage of. But the Thompsons have absolutely nothing to be ashamed of. And neither does anyone else tricked by Baron Cohen, unless they had something hateful or horrific to say.

If I were working for a Trump campaign, I’d want to use the Thompsons as a poster family. And on a personal note, the Thompsons are welcome at my Shabbat dinner table anytime — I’m sure they’ll listen politely to the Jewish blessings, ask interesting questions and enjoy the food.

Cohen didn’t “dupe” the Thompsons into anything because they don’t have abhorrent opinions bubbling just below the surface, ready to burst forth at the slightest provocation. Likewise, Cohen didn’t “dupe” Senator Bernie Sanders, who appears in the beginning of the episode sitting patiently through a series of ridiculous claims about Obamacare, because Sanders is ideologically consistent. And even despite inspiring her to donate a lock of her own pubic hair, Cohen also didn’t “dupe” the California art director who was so taken with the work of the feces-painting incarcerated artist Cohen pretended to be — she was genuinely inspired by his art and his story, whether real or imagined.

And Cohen didn’t “dupe” any of the politicians who endorsed giving elementary school students guns as they stared unflinchingly into his camera. When pressed by an eager lobbyist, shielded by closed doors or lubricated with a half glass of the good stuff, these are the sorts of NRA-appeasing things politicians actually say. Cohen just managed to strip the speakers of their inhibitions and their treasured secrecy.

“Who Is America?” may be edgy by design. It may also force those in power to quickly explain the abhorrent things Cohen has pressed them to reveal. But good people of America really have nothing to be afraid of.