‘The Most Jewish App Since JSwipe’: Scott Rogowsky On HQ Trivia 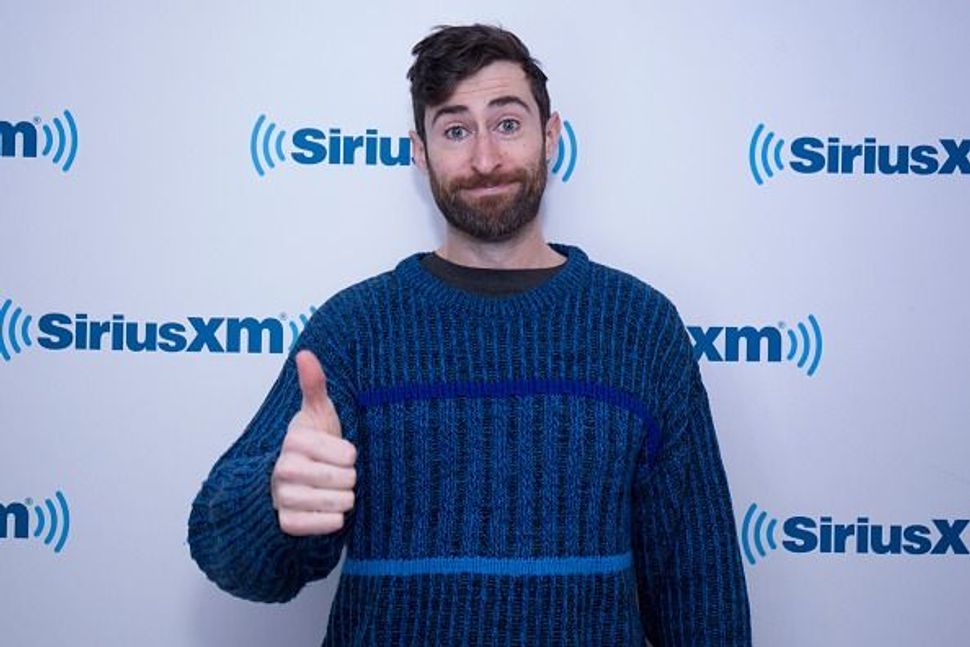 Since its launch in August 2017, the 1-year-young gameshow app HQ Trivia has changed lives, filled coffers, and strengthened thumb-muscles beyond previously believed limits.

The live, app-based trivia game airs at 3pm and 9pm on weekdays, and allows users to “take a stab at correctly answering 12 multiple choice questions (which start easy but rapidly become more difficult)” with the chance of winning prize money.

Whether it is the sheer rush of the game, the sense of competition amongst colleagues, friends and family or the chance to win thousands of dollars, HQ Trivia has been a landslide success. Host of the game Scott Rogowsky (follow his twitter here, has already won the game — he’s on his way to household name recognition and gameshow host superstardom.

Rogowsky’s fame has not progressed in spite of his Jewish roots (evident in his name alone,) but rather his Jewishness has been used as a great point of comedic inspiration. I mean — did you see the outfit he wore on erev Hanukkah?

CHAPPY CHANUKKAH #HQties! For those asking about the festive duds, blaze on over to @shinestythreads and they’ll hook a Hebrew up!

It became vital for us to speak to Rogowsky himself, to learn more about HQ Trivia and, of course, to find out what synagogue he belongs to. (This interview has been edited for clarity.)

The Schmooze: What is it about HQ Trivia that has that “wow factor?” There’s an addictiveness to the game that can’t be denied. Why do you think that is?

Scott Rogowsky: Since the beginning of HQ Trivia, when only 48 people logged in, the chat section was lighting up with comments such as ”This is so cool!” So, we hooked those early users with alluring graphics and sound, a fast-paced test of wits, interactivity with a live and entertaining host, and the lure of winning free money. It’s an instantly familiar and “gettable” concept that appeals to people of all ages and backgrounds and is ideal for group settings. Word-of-mouth buzz from school to school and workplace to workplace fueled the initial virality and continues to attract new users every day.

As a comedian-turned-presenter, how do you use this platform to combine the objective presentation of facts that the game is focused on with your own comedy?

Rogowsky The privilege of this pulpit is not lost on me, and while my underlying purpose is to read a series of trivia questions off a teleprompter, I would feel a sense of dereliction of duty if I didn’t address certain topical events that concern our society and affect my fellow human beings. It’s not about causing a reaction; it’s about speaking truths to diffuse the bulls**t bombs that are going off all around us every five minutes. People are looking to HQ as a ballast of incontrovertible facts to keep them steady on the choppy seas of fake news, and, like [the singer] Dido, I will go down with this ship.

Obviously we are a publication that is focused on anything and everything Jewish, and so we would just like to know a bit about your Jewish background? How does your yiddishkeit feed into your role as a public figure with such a well-watched platform?

Rogowsky: HQ Trivia is the most Jewish app since JSwipe. During the show I call myself “the Host With the Challah French toast”, the “Kosher Conan”, the “Meshugganeh Martindale”, the “Semitic Sajack”, the “Hebrew Steve Harvey”, “Schtick Cavett”, the “Quizzler on the Roof”, and the “Tevya of Trivia,” to name a few. On Friday nights I bid the players Shabbat Shalom and congratulate them with yasher koach (“more power to you”) when they win.

As for my own Judaism, being raised in a kosher home and attending the Westchester Conservative synagogue (which my grandfather helped found) are undoubtedly great parts of my identity. When it comes to being Jewish, I can’t help myself. I wear my Judaism on my sleeve — and my face for that matter.

I’ve always been obsessed with death. My first words were the Mourner’s Kaddish.

So, we are schepping great nachas to report that our Jewish culture is being presented with humor and passion by our fellow tribe member Scott Rogowsky. We salute Rogowsky for so wittily using his Jewishness on such a well-watched platform, and, naturally, for reppin’ his childhood synagogue.

See you on the app.

‘The Most Jewish App Since JSwipe’: Scott Rogowsky On HQ Trivia