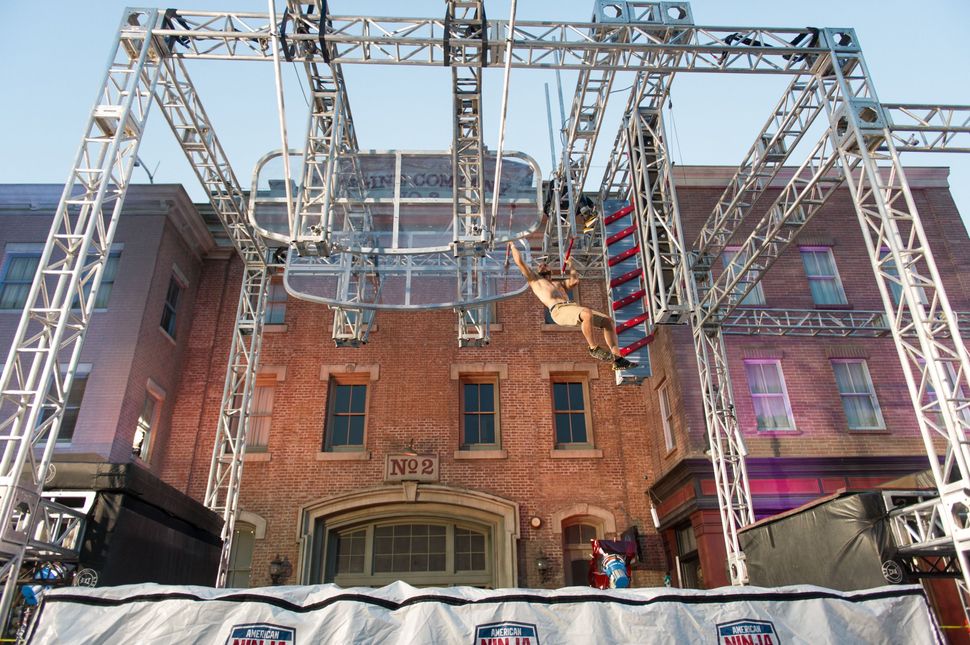 A course from America Ninja Warrior Image by Getty Images

Casey Rothschild couldn’t talk when I called. She’s working at a children’s day camp this summer, where it’s difficult for her to get away to talk on the phone. She said this so politely that I considered that maybe I had the wrong Casey Rothschild.

I was trying to get in touch with a woman who is a fierce competitor and a top athlete — a person who at 20 became the youngest woman to ever finish the course on the television show “America Ninja Warrior.” She did this while balancing a full course load at an elite college, maintaining a social life, and rock climbing in her spare time. The person on the end of the phone was an impeccably polite, down-to-earth 20 year-old with a passion for the outdoors and a part-time summer job. Casey Rothschild is a track star, a pole vaulter, a celebrated circus artist, a dedicated student, and now, a record-holder. She is an up-and-coming American Ninja Warrior. She’s also a nice, normal Jewish woman. And shame on anyone who thinks you can’t be both.

Rothschild actually owes her start to summer camp — as a nine year-old at YMCA camp, she was introduced to circus arts for the first time. “I really loved the aerial arts,” she says, dreamily. She started with aerial hoops and moved on to trapeze. Then, she was hooked. How do her parents feel about having a daughter who spends her days practicing death-defying feats at neck-breaking heights? “My dad always found me climbing on the roof when i was really little,” she laughs. “My parents are really encouraging,” the Massachusetts native added. “My mom has been driving me to Brattleboro, Vermont once or twice a week for the last seven years to take trapeze classes.” Rothschild’s mother, who is Jewish, watched the competition from feet away in the same shirt all her daughter’s fans wear, reading, “Circus Ninja.”

“Where did she come from?” the host of “American Ninja Warrior” shouts as Casey Rothschild uses momentum from her arms to swing several feet through the air above a pool of water, latching onto a chink in the apparatus with a metal bar. Apparently weightless, Rothschild flies through the obstacle course, pausing every so often to scream in excitement, as the crowd cheers, her mom claps, and her boyfriend watches through an iPad. American Ninja Warrior, a spinoff of a similar Japanese program, is a sports competition show that takes athletes through a series of obstacles that call for strength, precision, and dexterity. Many of the challenges, like running straight up walls and swinging from moving monkey-bars, look both silly and impossible. Rothschild first saw “Ninja Warrior” on television in 2014. “I really liked the fact that it was something different every single time,” she says. “That was something I had gotten with circus. You get to make your own moves, make your own obstacles.” When she enrolled at Wesleyan University two years ago, she found a nearby gym that specialized in ninja-training. Now she trains with Drew Dreschel, a celebrated “Ninja” competitor. In her history-making run of the course, he crouches nearby, coaching her up the nearly-vertical 14.5 foot wall as the crowd whoops. Twice, she fails. On her third try, she succeeds.

“American Ninja Warrior” is an unusual sport in many ways — it’s new, and it’s designed to work as a television spectacle, though trying to get through a high-stakes obstacle course is not inherently odder than trying to vault over a pole or kick a ball into a goal. One more thing sets “Ninja” apart — competitors are wildly, warmly supportive of one another. During Rothschild’s run her competitors cheer her on like family members. “It’s a community,” says Rothschild. The longtime athlete, who ran track and field at Wesleyan for a year before choosing to devote herself fully to “Ninja” training, says that at weekend competitions and even on the show, competitors who go through the course first give advice to the other athletes about how to handle tricky apparatus. “Everyone’s sort of pushing themselves to be better,” she says. “Everybody wants you to do well.”

When Rothschild competed in Philadelphia she went up against stars of the show — people she had watched on TV. When it was over, she was a star.

“Having kids ask for pictures is really…different,” she says, carefully. “It feels cool. It was a very sudden thing.” Surely, after her success, Rothschild plans to relax and let her calluses heal, right? “I like going to movies and seeing improv shows and hanging out with friends,” she says. “But really, [I love] more active things like rock climbing. ‘Ninja Warrior’ is something that feels like a pastime activity.”