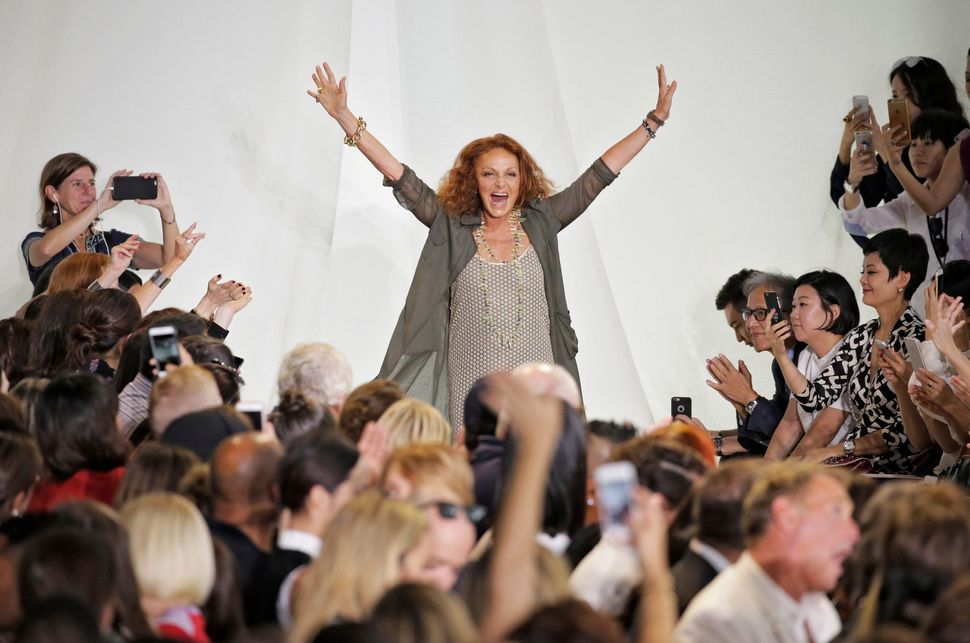 In an extraordinary interview with the Times of London, legendary Jewish fashion designer Diane von Furstenberg spoke about growing up with a mother who survived Auschwitz, marrying a prince, and why Viagra is “the worst thing that has happened to women in the last 15 years.”

“I have never worn something that’s uncomfortable,” the iconic wrap-dress creator announced to writer Anna Murphy. von Furstenberg, the 71 year-old fashion mogul, has two Jewish parents — her father was a Belgian immigrant from Kishinev and her mother was a Greek immigrant who came to Belgium only after surviving deportation to Auschwitz during the Holocaust. Murphy’s profile opens with this harrowing anecdote from the former princess:

From The Times of London Image by Screenshot

Throughout her long and history-shaping career, von Furstenberg has often credited her mother’s influence. Later in the interview, she reflects on deciding whether or not to accept a marriage proposal from Egon von Furstenberg, the German prince with whom she had become pregnant. “At first I said to my mother, ‘I don’t want to do this,’” von Furstenberg recalls. “She said, ‘He asked you to marry him, so the least you can do is let him be a part of the decision.’ So I sent him a telegram. He sent me one back. We arranged a wedding in Paris for mid-July.”

Now von Furstenberg, who is worth approximately $300 million and has enjoyed a second wind in the success of her brand since its revamp in the late 90s, has been married to Jewish movie mogul Barry Diller for seventeen years. Another thing the fashion leader doesn’t fear? Aging. The way society looks at aging today, von Furstenberg says, is “humiliating…You should embrace it.” Not just women with their looks and the anti-aging beauty industry, she cautions.

Men should, too. “There was a certain fairness. A woman couldn’t have a child after 40, right? Though even that doesn’t exist any more. But the man could have a child until 65, but sexually after a while…Now, with Viagra…they just feel…I think Viagra is the worst thing.”

Sometimes, she says, she just wants to get away from his dogs.