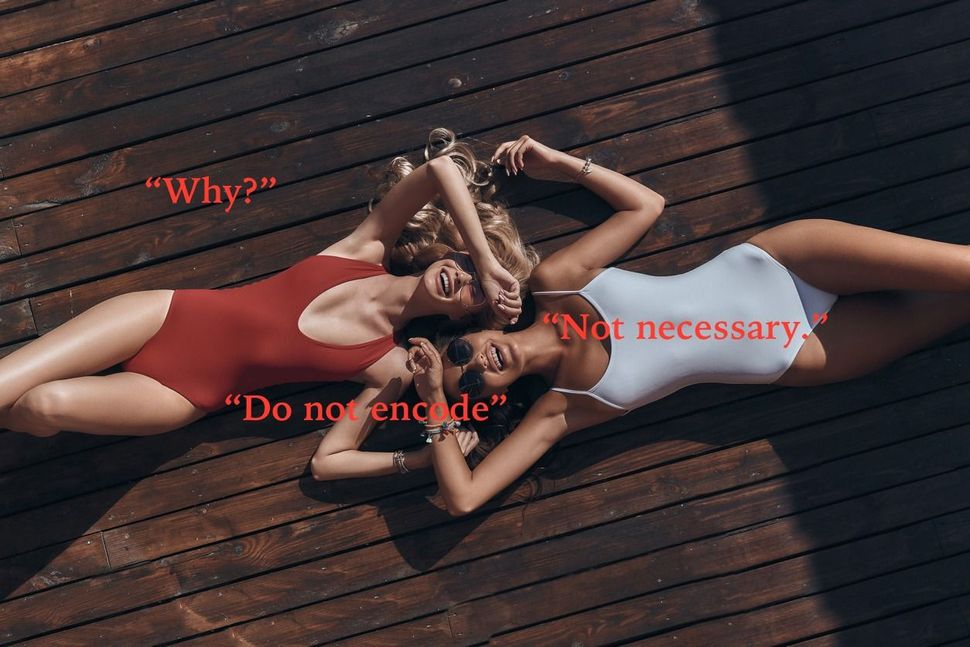 Are these women modest? Sexualized? Or just “not necessary”? Image by iStock

Ever since accidentally sending my gynecologist the crying-while-laughing face on Facebook, I do not care for emojis. They’re eerie. The only exception is the swimmer doing crawl-stroke. Where is he swimming off to? That is what I would like to know.

But for a hefty fraction of the world’s two billion smartphone users, emojis are key to every day communication. And that means that if the emoji exclude people of color (when first introduced all humanoid emoji were yellow, in a cartoonish nod to whiteness) or participate in blithe gender stereotypes (until two years ago, the only woman emojis were bride, dancer, princess, and playboy bunny,) then a major innovation is mired in systems of inequality.

Emoji politics sound silly — though if your child spends eight hours a day looking at rudimentary pictograms that confirm antiquated ideas of how life should be lived, isn’t that silly too?

On the left, the existing bikini emjoi. On the right, the proposed one-piece addition.

Florie Hutchinson, an arts publicist, and Jennifer 8. Lee, who cofounded the emoji inclusivity company Emojination, have proposed that the popular yellow polka-dot bikini emoji be joined by a classic one-piece bikini. Their proposal, along with thousands of others, has to go through Unicode, the organization made up of techies and designers that shepherds emojis from idea to virtual reality. Emoji innovations — like the hijab emoji, passed by Emojination, and a rifle emoji in contention right now, have to go through Unicode before they can be standardized on phones.

Many women are excited by this — one piece swimsuits tend to be more comfortable, and certainly more utilitarian. For women who prize modesty, especially religious women, the “maillot” (apparently the accurate way to refer to one-pieces) is a nice example of representation. Reasonable enough.

Others see the one-piece as an opportunity for women’s bodies to be less sexualized. In a piece of reporting exploring the controversy, Vanessa Friedman for the New York Times wrote of the proposed emoji, “The style of the suit — thigh-cut legs, round neck — is more sporty than sexy, and the curves of the theoretical body beneath less Playboy than those implied by the bikini.” But why do Friedman and other detractors of the original emoji, with its bulging pink triangles, think that having large breasts suggests a desire to be sexualized? Short of surgical intervention, breast-size is outside the control of most women.

Friedman goes on, “The one-piece is designed to appeal to those for whom swimming, or the pool and the beach, is more about activity than, say, hooking up, or who identify with strength and functionality (or discretion) more than seduction.” This is a strangely provincial view for a fashion writer, implying that women who wear bikinis are weak but determined femme fatals, and moreover that women’s dress can only be either for attracting or deflecting sexual attention. Even when it comes to emojis, steps towards inclusion and equality are fraught.

But lest we continue to tumble in the tall waves of various feminisms, we should redirect our energy at men who are uninterested in what women want, period — the male coders at Unicode who dismissed the one-piece idea out of hand. Friedman reports that Michael Everson, a male coder on a deciding subcommittee commented of the one-piece proposal, “Why? A person wanting to indicate the use of swimwear can’t use the existing BIKINI? Is this really necessary? What about a Victorian bathing costume? Or a wet suit? Or water wings?”

Not satisfied with Everson giving new meaning to a “slippery slope” fallacy, another committee member, Andrew West, wrote, “Do not encode. Not necessary.”

The one-piece remains on the 2019 emoji shortlist, its fate undecided.

So there you have it. While we squabble amongst ourselves for scraps of freedom, men will be clear on what is and isn’t necessary for women’s bodies. Never say you haven’t learned anything from emoji!

Jenny Singer is the deputy lifestyle editor for the Forward. You can reach her at [email protected] or on Twitter [@jeanvaljenny](https://twitter.com/JeanValjenny