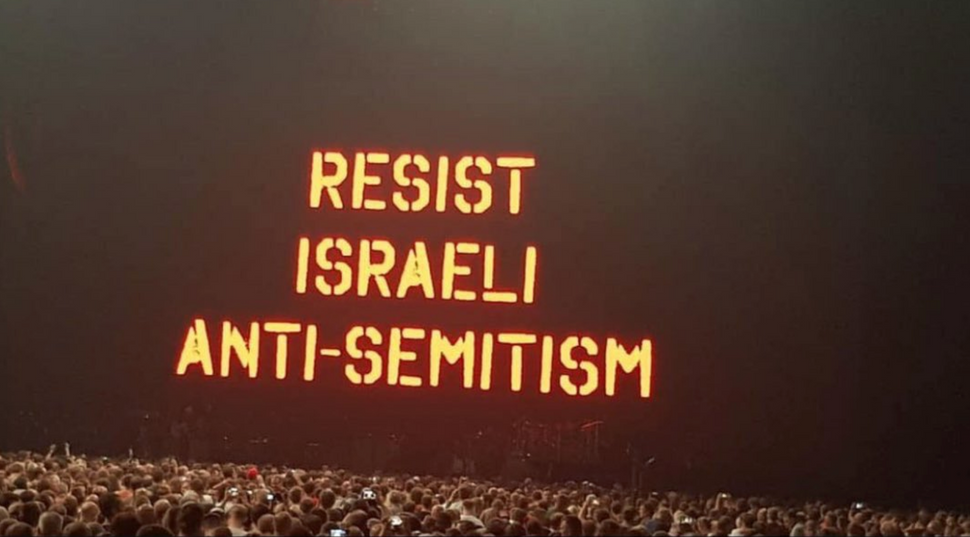 Ah, life! Full of riddles. For example: What walks on four feet in the morning, two in the afternoon and three at night? And additionally — why did Roger Waters put up a projection at his concert in Poland reading “Resist Israeli Anti-Semitism”?

This one’s a puzzler. The Pink Floyd co-founder is one of the most outspoken celebrities against Israel. He has famously supported the BDS movement, frequently speaking about Palestinians as “indigenous people” and Jewish Israelis as “settler colonialists.”

The cross section between “Pink Floyd Twitter” and “Jewish Twitter” is alight today as many report that Rogers projected a sign on the wall of his concerts this weekend in Poland that read “Resist Israeli Anti-Semitism.” Rogers is touring Europe, and allegedly his concerts in Krakow and Gdansk showcased this, among other activist statements.

That Roger Waters displayed this at his concert in Poland of all places is unendingly odious. pic.twitter.com/6sGyNtZspm

If you thought Rogers might be subversively suggesting a pluralist sentiment and accusing Israel of discriminating against non-Orthodox Jews who aren’t recognized by the Israeli rabbinate, think again. He’s a man of The Wall, not a Woman of the Wall. Here, another tweeter displays the same projection from a Rogers concert in London this summer, showing a second, complementary projection:

Israel discriminates against Palestinians in the basis of religion & ethnicity

What Rogers seems to be alluding to here is that Palestinians are the real Semitic people. Of course, Arabs and Jews are both considered “Semites” — peoples who speak Semitic languages. But the accepted definition of the phrase “anti-Semitism” is prejudice against Jews.

Rogers’ sign, however bold and halogenic, is making a pretty insidious claim — that Jews can never be the oppressed, only the oppressors. However fairly damning real criticism of Israel policy can be, Rogers’ claim is far from that — it’s a complete erasure of Jewish history and culture under the guise of activism. And in its rush to punish Israel as a country, it punishes Jews everywhere.

Likely Rogers used the same projections in every city. But if he’d taken time during his tour to visit the sight of the Warsaw Ghetto, where Jews were held captive in a city where they had once been a dominant minority of 30 percent, he’d know that most episodes of anti-Semitism in history have had a sly, ironic twist.

For us, this is just another brick in the wall.