‘BlacKkKlansman,’ Randy Newman In L.A. And More To Read, Watch And Do This Weekend 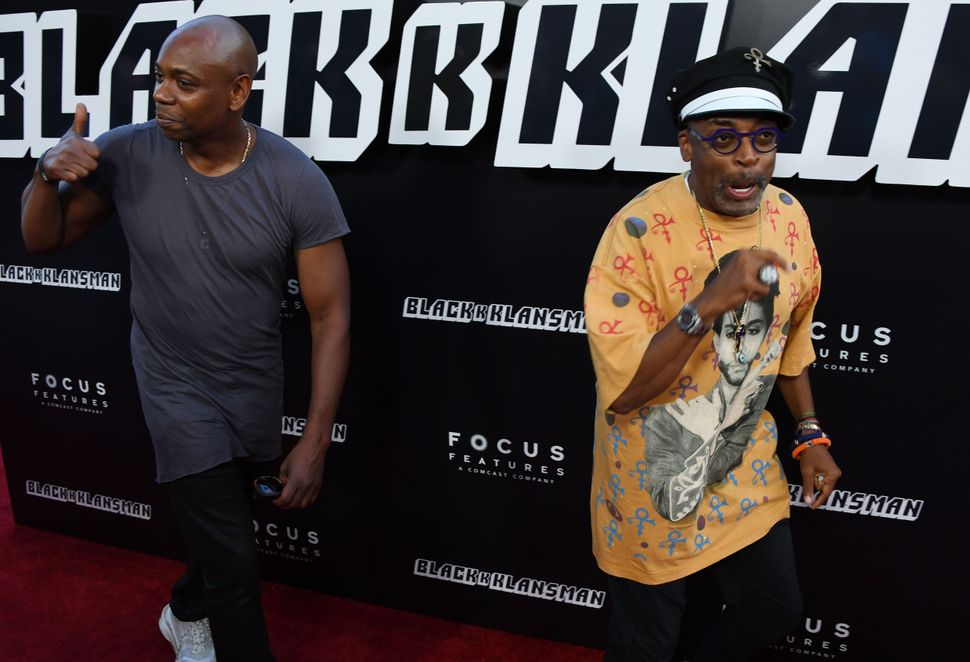 Dave Chappelle and Spike Lee at the premiere of “BlacKkKlansman” on August 8, 2018. Image by MARK RALSTON/Getty Images

I spent last Saturday at a truly raucous wedding, so my plans for the forthcoming weekend are heavy on sleep and light on, well, everything else. If you, unlike me, are planning to be out and about this weekend, read on for the best weekend events in New York City, Washington D.C., Chicago and Los Angeles, as well as the best new books and movies.

It’s paperback season! None of them are beach reads, precisely, but it’s a good time to pick up newly totable copies of Walter Isaacson’s “Leonardo da Vinci,” Ruth Bader Ginsburg’s “My Own Words” and Nicole Krauss’s “Forest Dark.” (Want to know more about the books? Read the Forward’s coverage of “Leonardo da Vinci” and “Forest Dark.”)

The hot ticket this weekend is Spike Lee’s new venture, “BlacKkKlansman.” Writing about the film for the Forward following its screening at the Cannes Film Festival, A.J. Goldmann commented that even though the movie is set in the 1970s, “Lee’s finger is unerringly on the pulse of Donald Trump’s America.” If you, like me, are committed to remaining on your couch this weekend, go for the new Amazon miniseries “Ordeal by Innocence” instead. An adaptation of the Agatha Christie novel of the same name, the series is directed by Sandra Goldbacher.

If you’ve yet to see Tracy Letts’s “Mary Page Marlowe” at 2nd Stage, catch the Lila Neugebauer-directed production before it closes next weekend. The 2018 Battery Dance Festival opens this weekend, with Ariel Rivka Dance Company on the Sunday roster, and runs through August 18. And if you yearn for Leonard Bernstein, attend the Paley Center’s Sunday screening of his selected appearances on TV.

It’s a sleepy weekend in D.C., so take some time to catch up on exhibits you may have missed. “Drawn to Purpose: American Woman Illustrators and Cartoonists” at the Library of Congress is promising, as are Richard Deutsch’s “Against the Day” at the Kreeger Museum and “Secret Cities: The Architecture and Planning of the Manhattan Project” at the Building Museum.

Head to the theater this weekend; William Inge’s “Bus Stop” at the Eclipse Theatre and the Goodman Theatre’s which features a score by Michael Roth, are both good picks. Monday, stop by Komechak Art Gallery for the opening of “The Power of Comic Art.”

I have never forgiven Randy Newman for his ruthless denigration of short people, but that does not mean you should skip his Hollywood Bowl concert this Sunday. If you prefer your music in a more corporate setting, see the Torrance Theatre Company’s take on “How to Succeed in Business Without Really Trying.” And if you prefer your theater without music, try little fish theatre’s production of Neil Simon’s “Plaza Suite.”

‘BlacKkKlansman,’ Randy Newman In L.A. And More To Read, Watch And Do This Weekend