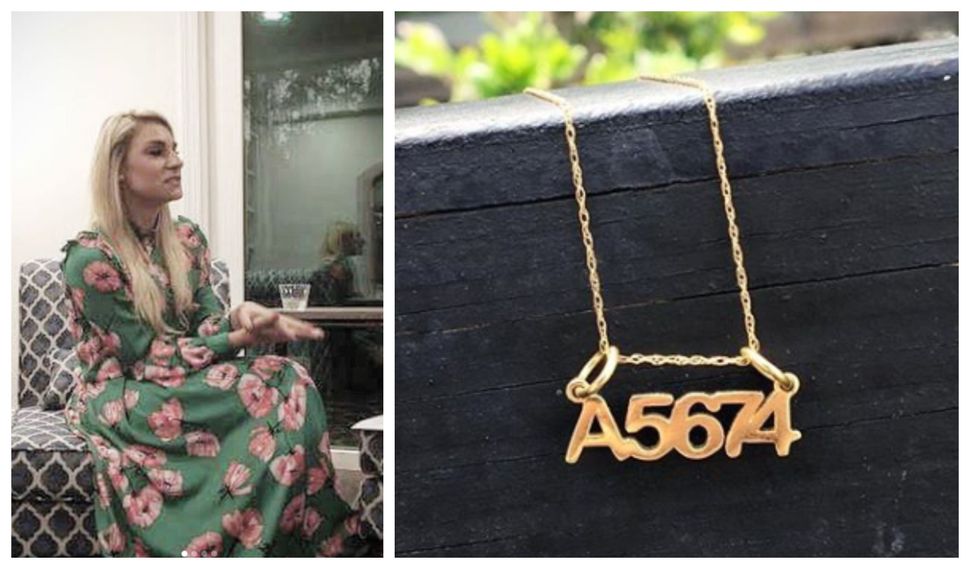 Dana Rogozinski, founder of Jakob Ella jewelry, always knew she wanted to find a way to carry on her grandmother’s Holocaust legacy, but she didn’t quite know where to start. Dana always kept her grandmother’s story close to her heart, even as she studied fashion and jewelry in New York, and felt an even stronger tie to her family’s past when she spent time in Israel. And once her grandmother started exhibiting signs of dementia, Rogozinski realized it was now her responsibility to relay her family’s story.

Jakob Rogozinski and Ella Lucak Rogozinski had survived numerous ghettos and camps, including Bergen-Belsen and Auschwitz. Ella, born in 1927 in Svalava, Czechoslovakia, met her husband, Jakob, a Polish native, in a displaced persons camp in Germany after the war before they moved to Israel where Jakob’s only surviving brother lived. The rest of his family — including four other siblings, their spouses and children — all perished, as did most of Ella’s family except for two sisters and an aunt who moved to Jacksonville, Florida, where the Rogozinski’s grandparents would settle in 1959.

We am so thankful for these two, Jakob and Ella. Thank you for being so strong, immigrating to this country, flying your American flag proudly and creating a beautiful life for our family. Happy Independence Day to everyone. #neverforget #numberstory #family #holocaust #remembrance #jewelry #heirloom #legacy #inspiration #history #jakobella #3rdgen #1949 #piecesofhistory #grandparents

While in Jacksonville, Ella worked as a self-taught jeweler for almost fifty years. As a young girl, Ms. Rogozinski would sit at Ella’s kitchen table and play with her jewelry supplies. When Ms. Rogozinski came up with the idea to combine her love of jewelry and her passion for her grandmother’s story, she called the jewelry store where her grandmother had worked for most of her career — Underwood’s Jewelers — and asked if they could help her honor Ella by making an elegant yet simple pendant with her grandmother’s number on it. That pendant became the very first piece of The Jakob and Ella Legacy Collection.

“I realized that jewelry not only lasts forever, but can spark a conversation,” explained Dana. “People point to my necklace and ask what it means, and I have a chance to explain and carry on the legacy. I feel it is my responsibility to speak for those who are no longer able to.”

Unbeknownst to her uncles, Dana had also ordered cufflinks for them with their mother’s number on them. When her father explained the significance of the etched cufflinks to his brothers and their families, they wanted to order additional pieces so they too could display ‘Nana’s’ number, as well as numbers of family members who did not survive the war. When friends and even strangers began inquiring about the jewelry and what it stood for, Dana started creating pieces for those who wanted to wear their own family members’ numbers as well as for non-Jews or those with no direct connection to the Holocaust who still wanted to be a part of sharing someone’s story and carrying their legacy. What was once a permanent mark of inhumanity to strip men, women and children of their dignity, the numbers displayed on necklaces and bracelets in silver or gold became symbols of empowerment. Each piece of jewelry bearing a number tells a unique story and allows younger generations to become the living legacies of those who came before them.

“Wearing the jewelry helps people feel connected to their loved ones while also educating others. We always say never again or never forget, but now we can really make a difference and tell people’s stories every day, not just on Yom Hashoah,” said Ms. Rogozinski.

Most recently, she received an order from some South African non-Jews who wanted to do their part in honoring victims. Ms. Rogozinski also works with the United States Holocaust Memorial Museum in Washington, D.C. and Yad Vashem in Jerusalem to research other victims and their stories so that those who perished without surviving friends or relatives can also have their stories remembered by those who wear their numbers. Each piece comes with a legacy card about the individual behind the number.

Dana regularly collaborates with other descendants of Holocaust survivors in designing custom pieces, giving them a platform to express and reflect on the legacies of their ancestors. Her Judaica pieces serve as a reminder of the past, including a bracelet displaying an upside down ‘B,’ a replica of the one found on the gates of Auschwitz as part of the “Arbeit Macht Frei” sign.

A bracelet composed of six Stars of David honors the six million who were killed. She even created inverted triangle pieces with different colored enamel, to represent the triangles which were worn by those in the camps to identify their prisoner status. A portion of each sale goes to funding Holocaust education.

Though Jakob and Ella were told by doctors that they wouldn’t be able to have children after the war due to what their bodies had endured — they went on to have three children, eleven grandchildren, and eight great-grandchildren to carry on their stories. All their descendants have to do is point to the jewelry around their necks to make sure they will not be forgotten.

Julie Sagoskin works in News Production at the flagship station of CBS Radio in New York and has conducted interviews with everyone from politicians to reality stars. She has been published in Resident Magazine, amNY, Guest of a Guest, The Jewish Voice and the Anthology of Poetry by Young Americans. Julie graduated with a B.A. in English and a minor in Journalism from Boston University and had a monthly column in the international equestrian magazine, Sidelines.