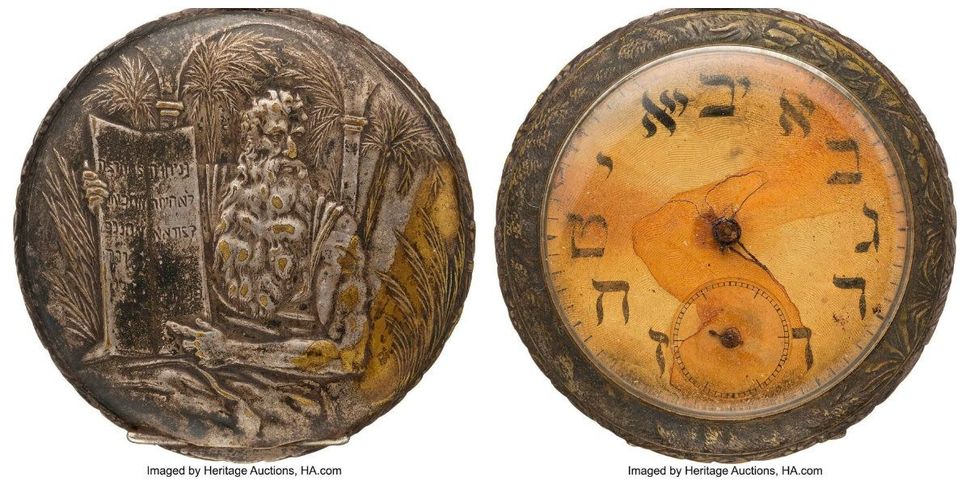 Every few years since the Titanic sank in 1912, a new bundle of artifacts resurface.

Just recently, a Hebrew inscribed timepiece, that belonged to Sinai Kantor — a Russian immigrant who perished along with 1503 other passengers aboard the doomed ship — was put up for auction. This coming Saturday, the century-old watch, will sell at the Heritage Auctions, starting at $20,000.

34-year-old Sinai and his wife, Miriam, were among 80 other Jewish travelers on the Titanic, which, surprisingly, even had a kosher kitchen on deck. The newly publicized relic sheds light on the little-known Jewish history behind the British Passenger Liner. Both second-class passengers were aspiring to be doctors in America, but only 24-year-old Miriam survived in a lifeboat.

The face of the pocket watch features Moses holding the Ten Commandments with muscled arms and the back of the watch has Hebrew letters 1 through 12.

“This timepiece with Hebrew characters is a touching reminder that we Jews were there,” said Marshall Weiss, editor and publisher of The Dayton Jewish Observer. “We were part of that temporary, stratified community, dreaming of the Golden Land, until for so many, time stood still.”

“A watch is a display item, and a watch with a Hebrew face with Moses on the back was something you wanted to have noticed,” Jonathan Sarna, professor of American Jewish history at Brandeis University, told the Religion News Service. For Kantore, his watch was not merely a time-telling device, but a way of telling people that he was proud to be a Jew.

Bonnie Azoulay is an Lifestyle intern at the Forward.