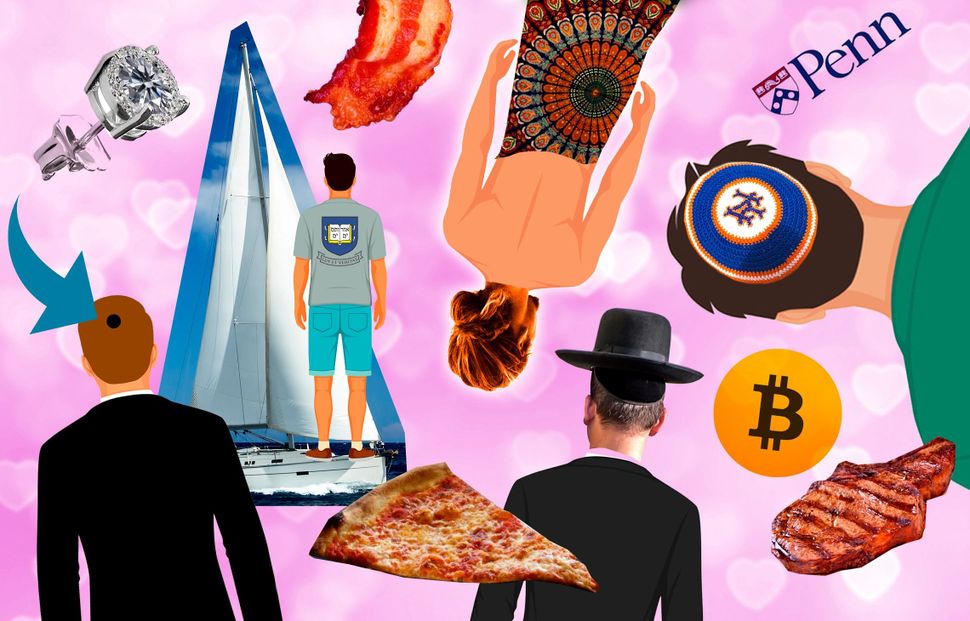 In the Torah, God promises Abraham more children than there are stars in the sky and grains of sand in the sea.

God is such a drama queen.

But those children do tend to congregate — New York has the highest Jewish population of any city in the world other than Tel Aviv — higher, even, than Jerusalem. Some of us are stars, and some of us are just beach dirt, and never is that more evident than when dating.

As a straight Jewish woman dating mostly Jews in New York City, I crowd-sourced this list from personal experience and from other young Jews who are dating or used to date in the city — male and female, gay and straight, single and married. Here are the 16 types of people you will date if you seek out Jewish men in New York City, written from a place of deep affection for Jewish men. To paraphrase Eminem, “Black Jews, white Jews, skinny Jews, fat Jews, tall Jews, small Jews, I’m calling all Jews — everyone report to the dance floor.”

1.The Golden Boy
He’s attracted to people who LOVE to eat but also like to “stay fit.” Works for Bain or McKinsey. Went to school “in New Haven.” Between March and October he can be mostly found on boats. Loves Tarantino. Trying to stick to the Keto diet. Believes if given the necessary power he could solve the Israeli-Palestinian crisis. Sometimes posts pictures on Instagram with a challah and the caption “Holla!!!!” Aspiring golfer. Jokes about needing to settle down with a “nice Jewish girl/boy,” though he doesn’t like dating people who “look Jewish” (whatever that means.) Pretty sure that dropped charge against him from that incident with his frat won’t keep him from succeeding in politics. Wears Allbirds. Listens to Pod Save America. Nice forearms. 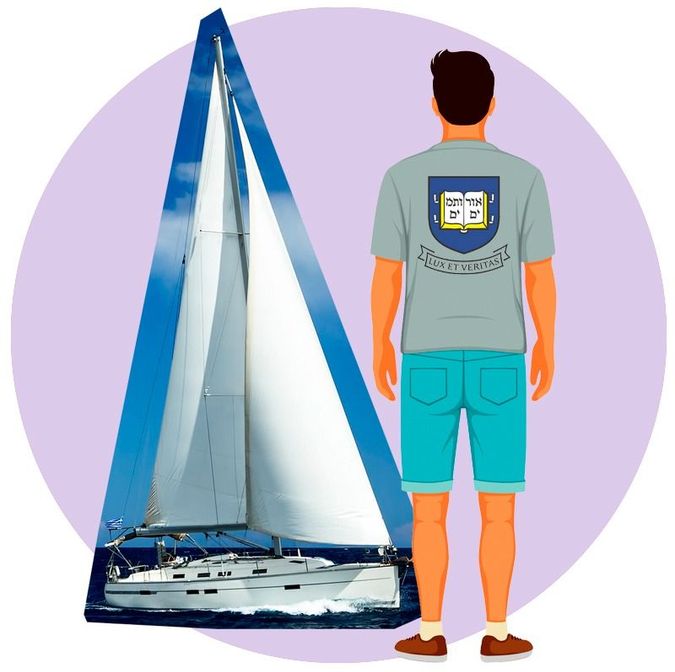 2. The Orthodox Guy Who’s Feeling Rebellious
This man’s kippah is the size of a newborn’s foreskin. It sits on the top of his head, six feet above the ground — you’ve never seen it, but you know it’s there. He eats at non-kosher restaurants, but only dairy. Named Akiva, but thinks your friend Arjun’s name is hilarious. He’s busy every week because he has to go to a wedding in the Five Towns. Lives with eight men in a seven-bedroom apartment in the Heights, and all of them are studying at Hadar.

3. The Ramah Guy
Won color wars. Did Little League through 8th grade, then switched to Model UN. Loves musical theater and isn’t ashamed. He’ll sing every verse of “La Vie Boheme” but he only likes doing the Javert parts in “Les Mis.” Owns a knit kippah embroidered with a sports logo. Has read all the biographies of all the prime ministers of Israel. Cries when his team loses. Constantly re-applying Chapstick. Forgets to vote in national elections. 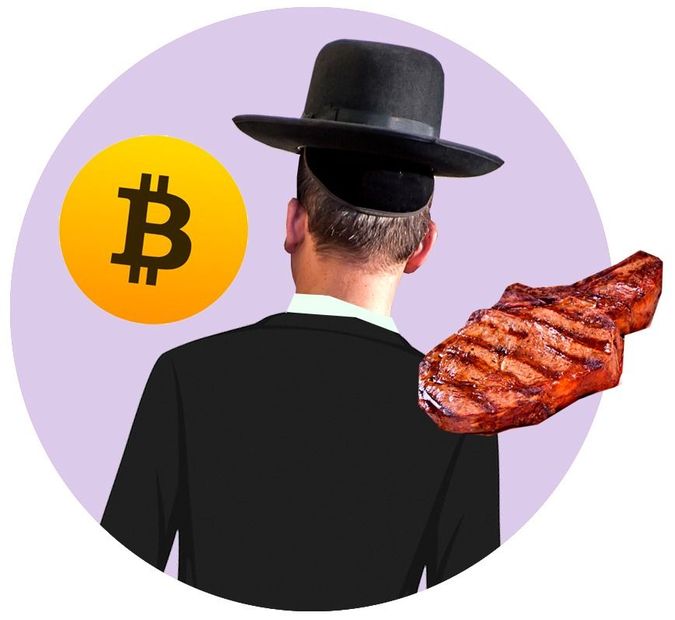 4. The Orthodox Guy Who’s A Player
Don’t call him Modern Orthodox, please -– he went to a serious Yeshiva. So serious that he brings tefillin on your date so he can daven shacharis after he sleeps over at your apartment. He uses “modern” girls for practice, but plans to marry a “real” frum girl. He’ll take you to a kosher bistro and explain cryptocurrencies to you. He’ll have the steak. You should probably order a salad.

5. The Atheist Libertarian
Wonders why anyone would believe in God if WARS happen. Wants to know if YOU think the parting of the Red Sea really happened — it didn’t!!! Just so you know!!! Claims to have read Rebecca Solnit. Responds to arguments by saying “Well, that’s a straw man” no matter what was said. Thinks Israelis and Palestinians should just “figure it out already.” Compulsively mentions his mother. Prefers women who are five feet tall. Challenges you to “give an example of a protest that was actually impactful.” Complains that #MeToo doesn’t allow for due process. Favorite book is “Lolita.”

6. The Good-looking, Respectful Orthodox Professional:
Whoops too late – married to that gorgeous girl whose Instagram you follow. Second child on the way.

7. The Modern Orthodox Guy Trying to Get Away From the Upper West Side
Wants to branch out but all his friends live on Riverside and 94. Just not ready to date seriously yet. He can’t help referencing his yeshiva in every conversation. Always volunteers to make kiddush on Friday nights. Once a year, he watches “Lord of the Rings” all the way through — it’s kind of his tradition. Will challenge you to a game of Settlers of Catan. Has the Sefaria app on his phone. Is an active vocal member of the Facebook group “God Save Us From Your Opinion.” The only bars he knows about in the city are directly adjacent to Saba’s Pizza.

8. The Woke Guy
Claims to be polyamorous; actually just graduated college a virgin, and now at 28 and suddenly experiencing dating success is trying to make the most of it. Strong defender of Woody Allen, thinks Lena Dunham is an evil on par with human traffickers. Juuls. Defends not tipping by claiming, “There is no ethical consumption under capitalism.” Says he organized for Alexandria Ocasio-Cortez but really just went to the Target in the Bronx once. Doesn’t believe in the concept of Nation States. Not into traditional family models per se but thinks it would be “chill” to have a kid someday. As long as it’s a boy. Wishes the Forward would get back to its Socialist roots. Is a consultant. 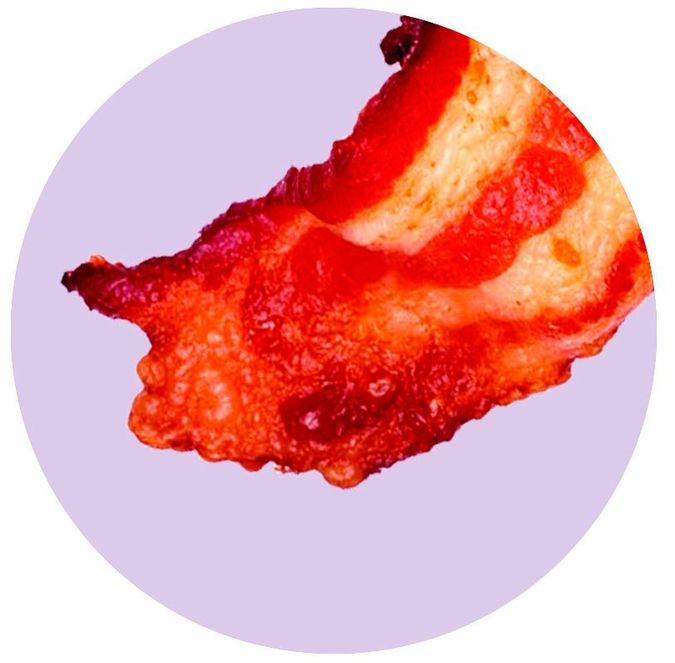 He wants you to know that you are missing out. Image by Nikki Casey

9. The Defiant Cultural Jew
Name is something like David Rabinowitz but he didn’t have a bar mitzvah because his dad is half-Catholic justsoyouknow. He thinks he was raised…Deconstructionist? Or something? Orders bacon on your first date to make a point. As he nervously runs his hand through what he fears is a Jewfro, he talks about growing up with “a crazy Jewish mom.” Only bedroom decoration is an “Annie Hall” print he bought at a stand near Union Square. Feels strongly that male circumcision is child abuse. He’s a little afraid that he’s anti-Semitic. He’s anti-Semitic. 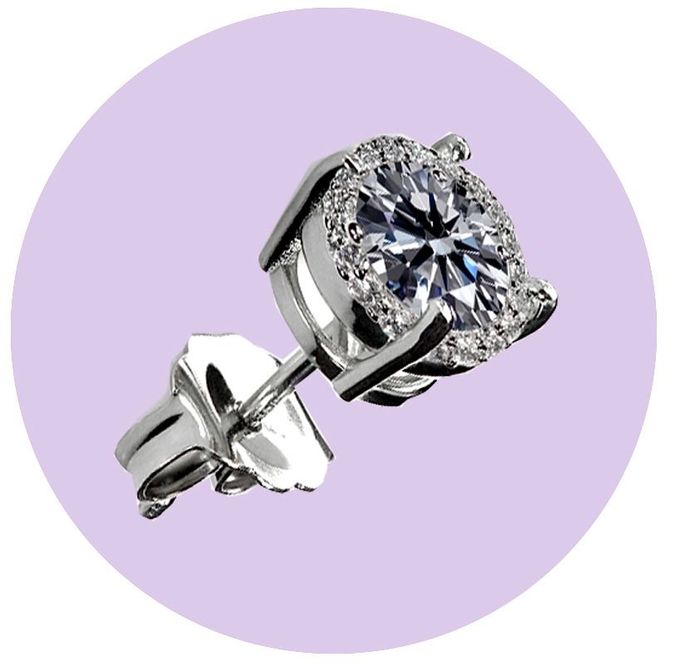 11. The AEPI Bro With A Heart of Gold
Fist-sized diamond in one earlobe. Lives in Murray Hill. Continued frat’s community service work after graduation. Works in finance. Owns 42 white Hanes V-necks. Doesn’t touch women’s lower backs when he passes them in bars ever since a female acquaintance told him it wasn’t cool. Marks himself “safe” on Facebook after every minor disaster. Good with dogs and babies. Actually a pretty nice guy.

12. The Enthusiastic Reform One:
Believes his chief rival for your love, in fact, anyone’s love, is Rick Jacobs. Knows just enough guitar chords to do acoustic versions of 90’s hits. Refers to himself an “NJB” (Nice Jewish Boy) and thinks your dad would love him. (He wouldn’t.) Keeps saying, “This country is being overrun by literal Nazis!” He has been to New Jersey and Pennsylvania, apart from that, “this country” is Twitter. Tries to drape his sweatshirt around your shoulders the moment the temp dips below sixty degrees. His team usually comes second at bar trivia. He can work the fact that he believes in a woman’s right to choose into any conversation. Thinks he likes girls who don’t wear makeup. Actually likes girls who are very skilled at putting on makeup.

13. The British Jew
Obsessed with British Jewish youth movements. Refers to Trump jokily as “your president.” Has spent at least 1.7 years in Israel. Claims to be a socialist. Lives and dies Man United. Has a lot of opinions about pedagogy. Had an absolutely life-altering experience at Limmud 2014. Kind of seems like an alcoholic. Goes to egalitarian minyan — ironically, he can’t really focus on Hashem with a mechitza. It’s just not how he was raised. After ten minutes of arguing against himself about Israel, he’ll look into the middle distance and sigh, “It’s just complicated.” 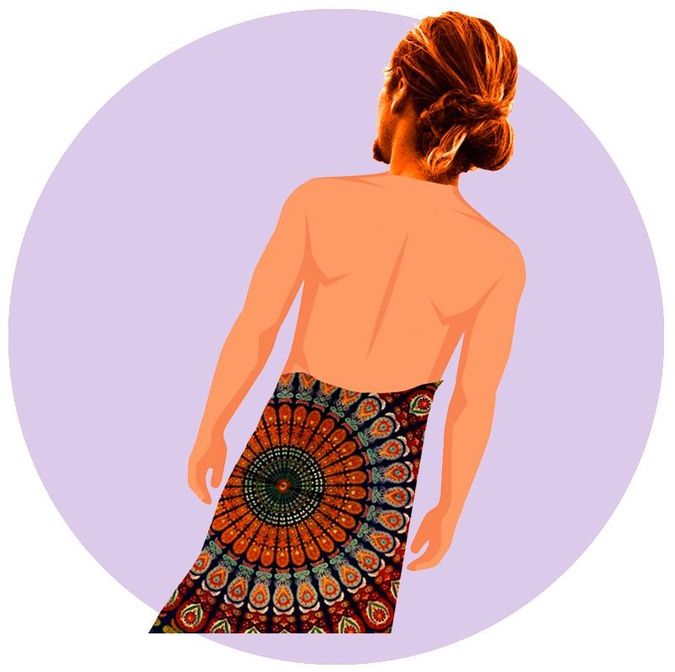 14. The Israeli Grad Student:
Doesn’t have a bed, just a mattress on the floor covered in Indian tapestries. Tiny gold stud in his nose the size of a freckle. Studies philosophy. Every shirt he wears is cut to expose his clavicle. Favorite thing to talk about is how he met people in South America who “live so simply.” Doesn’t support Bibi — but there’s just no one else who looks like a leader! Always tries to sleep with women on the first date. Doesn’t respect women who sleep with men on the first date.

16. Guy Who’s Using You As A Sounding Board To Decide Whether To Become A Rabbi:
Always saying “the Jewish establishment is broken!” Has never paid for membership to a Jewish organization or subscribed to a Jewish publication. Reposts Stand With Us material on Facebook. Leans against poles on the subway. Really concerned about what’s happening right now on college campuses because “free speech is under attack.” Did the Bronfman Israel Fellowship and never lets you forget it. Takes you to tourist-filled jazz clubs and shouts out “Now this is real music!” More viscerally angry about the misuse of the word “Nazis” in the national discourse than he is about any world event.