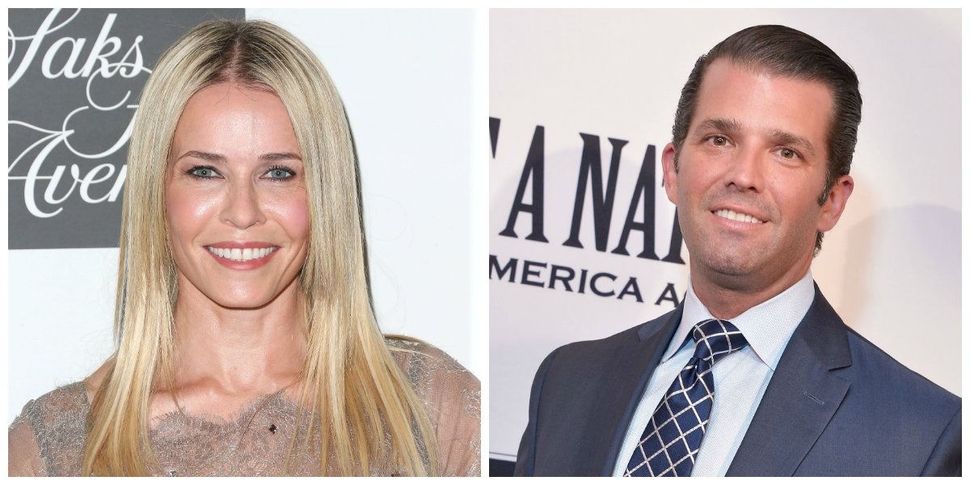 The first son reacted angrily to a tweet from Jewish comedian Chelsea Handler, in which she theorized that he would eventually “flip” on his namesake — provide incriminating testimony about his father in exchange for immunity in the Mueller probe.

The oldest Trump son fired back, suggesting that the comedian isn’t funny. Handler’s Netflix talkshow, he noted, was cancelled. “Stay away from politics,” he wrote. “No reason to suck at two things.”

It’s comments like these that make it very difficult to maintain respect for members of the first family.

What is the point of attending the prestigious Wharton School, serving as a political advisor on a winning presidential campaign, and being the trustee of a real estate empire, if after all that you aren’t on constant high-alert that using the word “suck” is always going to lead to a sex joke? Be proactive, Don.

It’s like those years in Phi Gamma Delta were a total waste of time.

Luckily, James Woods was there to pick up the slack.

Oh, Donald! “Solid” point? It’s out of the frying pan and into the fire for you.

Let’s break this down:

Here’s an example of a joke that came up when I googled “Chelsea Handler quotes”: “I can remember my first one-night stand like it was yesterday. Well, maybe not the first. Or the second… or the fifth. I’ll just begin with what I can remember and not concern myself with order.” Is it possible that James Woods is attempting to bolster Chelsea Handler’s career?

Then Donald Jr. responds by writing “solid point.” It’s not clear if he intended it as a pun, or if he’s just being cordial. At this point he’s fully lost control of his audience (me) because I no longer trust that he has a grasp (see how I did that?) on this subject matter.

A stronger choice might have been “Hard to say…hard to say!” or “Ballsy, Woods,” or maybe a longer reflection on how the extraordinary public nature of his own father’s sex-life would make it odd to lambast a woman whose greatest critics believe may have had intercourse with two or more people in 43 years.

Anyway, Donald, that’s just something for you to chew on.