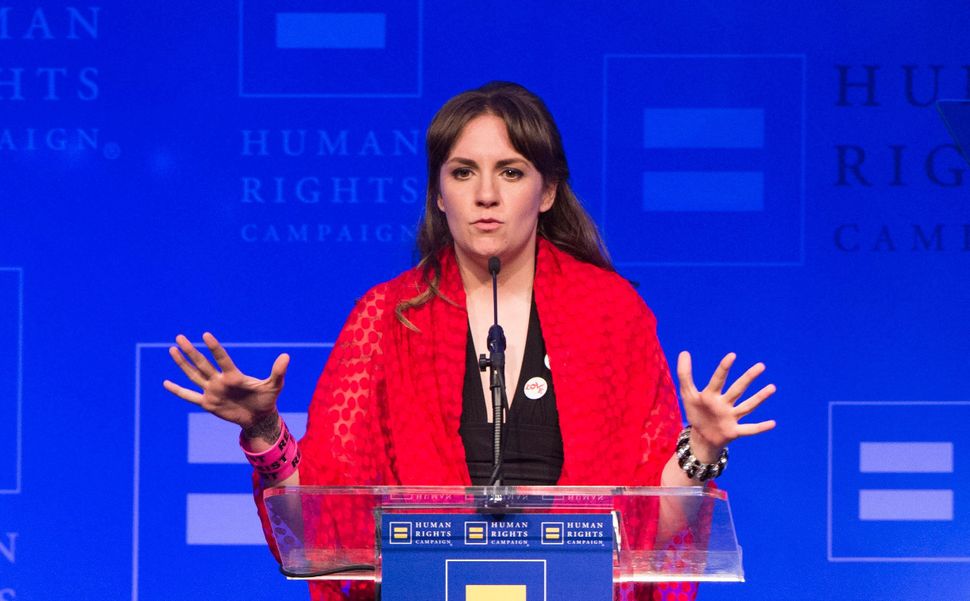 32-year-old auteur Lena Dunham is one of the most flexible people in the world — her foot is almost always in her mouth. On Wednesday, Dunham lived up to the name of the Twitter parody account “Lena Dunham Apologizes,” apologizing for collaborating on a fashion line that includes sweatshirts boasting slogans like, “Being fat is not beautiful. It’s an excuse.”

Here at the Schmooze we’re Dunham apologists — we think that the “Girls” creator is a brilliant artist and heady thinker whose attempts to do the wrong thing often go awry, and though she should be held up to critique, we believe she faces undo and illegitimate criticism that stems from sexism and fat-phobia.

But Lena, we have to say, you walked yourself into this one.

After the outcry, catalyzed by a post about the clothing item by fat-positive model Tess Holiday, Dunham posted a lengthy Instagram caption, explaining that while the sweatshirt is a result of her collaboration with clothing company Revolve, it was meant to be subversive, not hateful.

The idea of the collaboration, Dunham wrote, was “sweatshirts that highlight quotes from prominent women who have experienced internet trolling & abuse,” with proceeds from the sales given to charities that educate and empower young women. Dunham went on: “Without consulting me or any of the women involved, Revolve presented the sweatshirts on thin white women, never thinking about the fact that difference and individuality is what gets you punished on the Internet, or that lack of diversity in representation is a huge part of the problem (in fact, the problem itself.)” The star says she will be taking her name off the collaboration, and making a donation to feminist causes in honor of every woman whose name was attached to the hurtful project.

Oh, Lena! The treachery of corporate collaborations should be obvious at this point. Maybe a better sweatshirt slogan would be: Ceci n’est pas une sweatshirt for people who hate fat people.