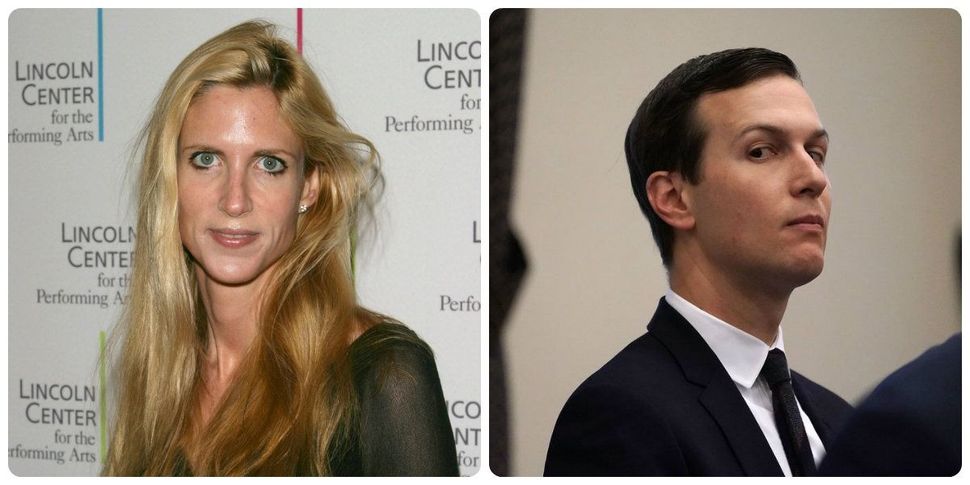 Watch your back, Jared Kushner. Image by Getty Images

In her new gleefully-titled tome, “Resistance Is Futile! How the Trump-Hating Left Lost Its Collective Mind,” Ann Coulter salivates over a fantasy in which President Trump murders his son-in-law and advisor Jared Kushner.

Ann Coulter is the mucus-coating on the scum clinging to the bottom of the refuse pile of cultural commentators and we hate to give her attention, but her musings about Kushner contain enough anti-Semitic dog whistles to rouse the entire canine population of Chelsea. Of all the members of the Trump administration (those still clinging to their jobs and those who are now a distant memory), Coulter lands on Kushner as the person who is “wrecking” Trump’s presidency. Identifying Kushner as her best guess for the writer of the notorious “lodestar” op-ed, Coulter writes blissfully of several scenarios in which Trump murders his son-in-law, reports The Daily Beast.

“If Trump realized that Jared Kushner was ruining his presidency and shot him, and then he fired the U.S. attorney investigating the crime, that would be a textbook case of obstruction of justice,” Coulter writes. “If he offered to pardon witnesses in exchange for their agreement to blame Steve Bannon for shooting Kushner—again: excellent example of obstruction of justice…But Trump hasn’t shot Kushner, and he probably won’t, since he doesn’t even realize that Kushner is wrecking his presidency.”

Coulter makes much of Kushner’s and Ivanka Trump’s spending time on the Upper East Side and in the Hamptons, accusing them of a secret liberal bias and suggesting that they exert a special, uncanny control over the president.

As Coulter suggests, Trump “probably” won’t shoot his son-in-law — he’s got enough on his plate as it is. But Coulter “probably” does continue to represent a large swath of the American public — those who see Kushner in a different light than his peers in the Trump White House, due to his Jewishness.