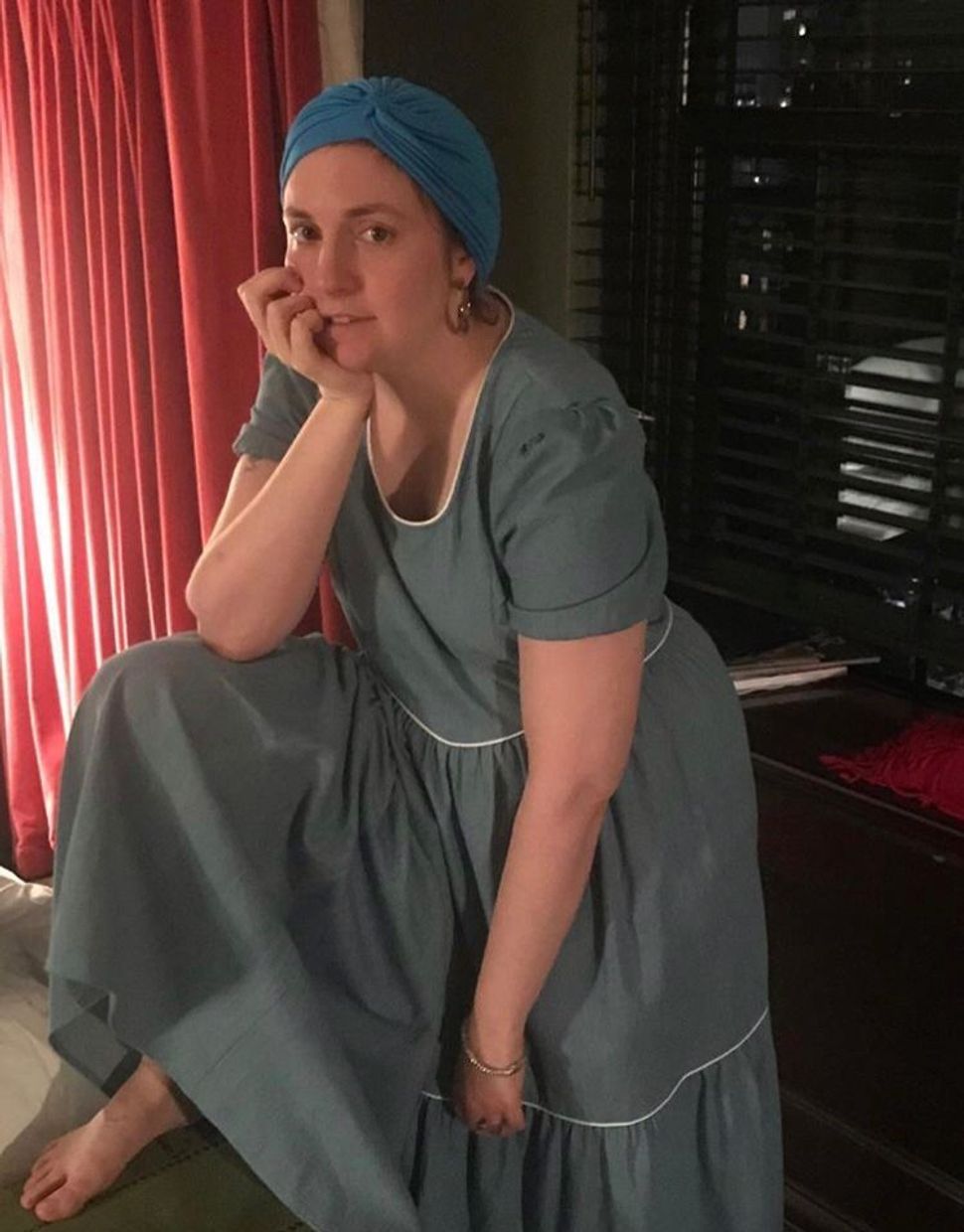 And on the 7th day of New York Fashion Week, Lena Dunham rested.

Her day of rest was not practiced for religious reasons but due largely to her ongoing health complications. And yet, in an Instagram post on Wednesday, the 32-year-old actress looked like nothing more than a nice Borough Park girl, dressed, as she was, in a high-necked, modest dress by Israeli-American designer Batsheva.

Why was the queen of nudity dressed head-to-toe in Hassidic fashion, you ask? And why does Dunham revere designer Batsheva Hay, whose collections are inspired by her Jewish upbringing and vintage patterns? Consider that Dunham lauded Hay for designing body-positive silhouettes just days before she was outed as an accidental body-shaming affiliate?

This is not the first time Lena’s high-profile words and actions have proved to be contradictory. We’re here to pick apart the hotly contested celebrity’s 48 hour Instagram bluster. Won’t you join us through this maze of mixed emotions, below?

Lena conveys how sad she is to be missing the Zero + Maria Cornejo fashion show. Even though the “Girls” producer won’t be in attendance, she wears one of the brand’s plaid midi dress and striped robe as shield of “armor,” as she describes it, in an Instagram post. The covered attire is used to combat the soreness she feels inside her body. We love this look, and Lena’s commitment to representing artists she believes in.

In another NYFW at home, Lena dons a midi length black and white Batsheva dress that could be described as the most chicest Yom Kippur ensemble we’e ever laid our eyes on. We love that Lena loves Batsheva. 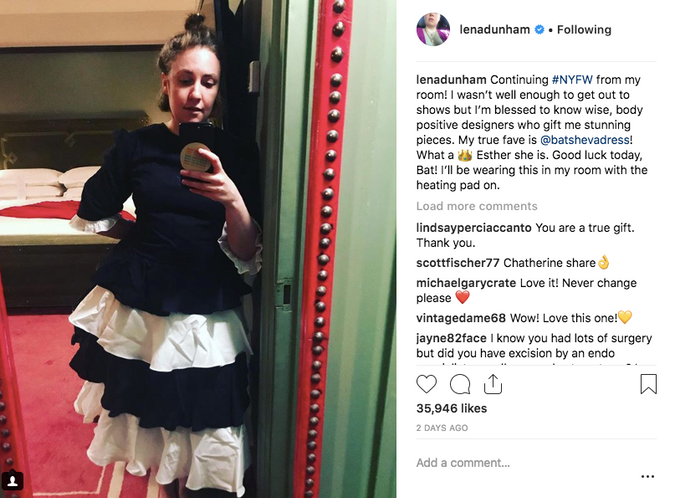 The queen of controversy takes to Instagram to show her unwavering support for candidate for New York State Governor Cynthia Nixon, and their shared ongoing fight to protect women’s bodies.

The LPA x Lena collection launches on Revolve, followed by immediate backlash after a shirt from the collection that reads: “Being fat is not beautiful, it’s an excuse” is shared on social media. Just the day before the self-identified body-positive advocate told viewers she supports a democratic candidate protecting women’s bodies. Now, we don’t know what to think. Her full apology and explanation can be found below. 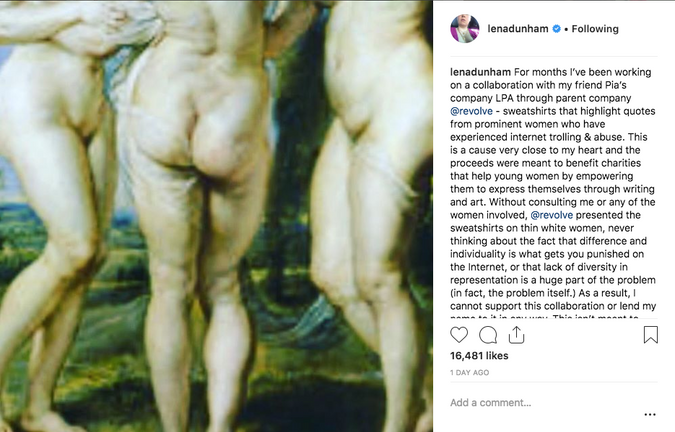 And now back to our regularly scheduled programming where Dunham goes from voting at Baruch College in a Batsheva prairie dress— ‘ I Voted’ stickers worn as pasties included— to posing in the nude with an accompanied statement solidifying her stance on women’s representation in the media. 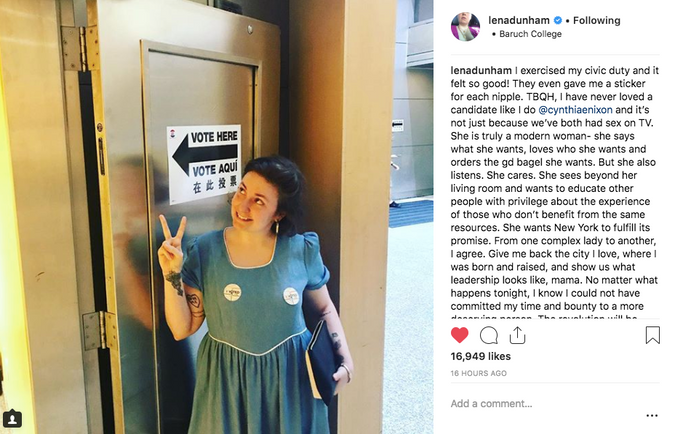 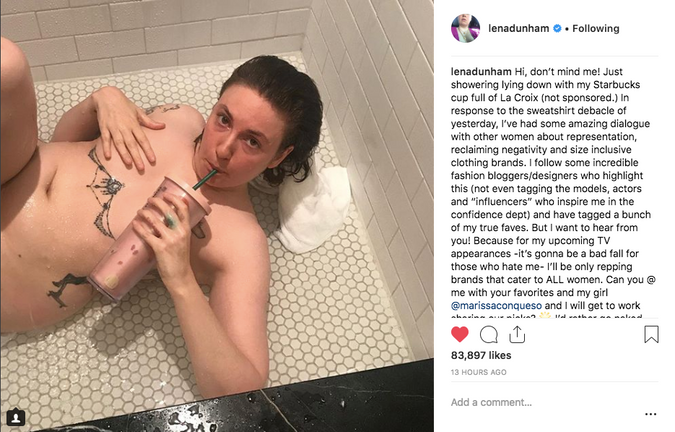 Phew, we’re just glad to finally be off that rollercoaster.