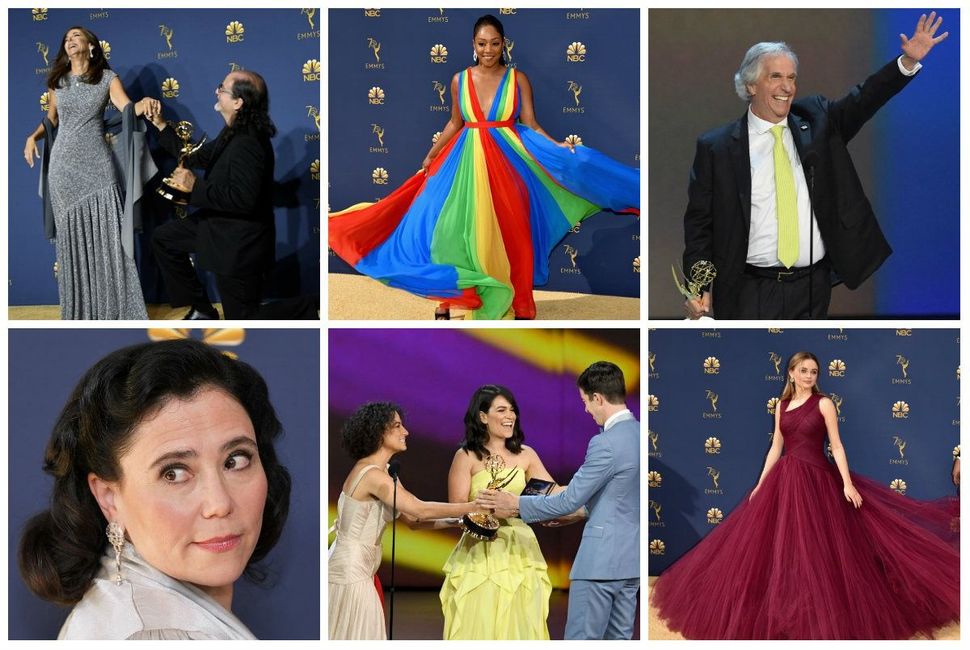 Just about every opportunity Jews had to win Emmy awards at the 70th Annual Emmy Awards on Monday night, they won. Sometimes twice.

The show was clunky, generally humorless, and typically lengthy — but the Jews, the Jews were out in full force. Let’s do this.

1.The gawky, well-meant musical opener featured Andy Samberg, funny and killing the thick-framed glasses game in spite of it all.

2.Hosts Colin Jost and Michael Che somehow surprised even their greatest detractors by being more mournfully unfunny and charmless than widely expected. Their best moments were Che’s references to his mother, who doesn’t like watching white award shows because “you guys don’t thank Jesus enough.” Jewish mothers around the world, half-watching in case of a winner thanking her mother, nodded in understanding.

3.Michael Che, referencing disgraced racist Roseanne Barr and the Middle East conflict in one sentence, somehow managed to be unfunny. “I heard Roseanne is actually moving to Israel — I mean damn how messed up is your life when you have to move to the Middle East just to get peace of mind,” he said.

4.America’s zayde Henry Winkler won his first-ever Emmy at 72 for “Barry.” Beaming, he said, ““Skip Brittenham said to me a long time ago, ‘If you stay at the table long enough the chips come to you.’ And tonight, I got to clear the table.”

5.Tracy Morgan announced, “I’m only rooting for the black people.” Those of us who spend award shows (in fact, all forms of entertainment,) scanning for signs of Semitism, understood.

6.Alex Borstein won Best Supporting Actress In A Comedy for “The Marvelous Mrs. Maisel.” The spectacularly powerful Borstein removed her wrap, shimmied, strode on stage, and accepted her Emmy in a tour de force speech that began with a public restroom PSA and ended with a tribute to her father. “I went without the bra! What a platform! Ladies, when you use a public restroom, sit down. If you sit, we can all sit — stop peeing on the seat — I want to thank everyone at Amazon,” Borstein said in a single breath, before going on to deliver a heart-stopping thanks to her children.

7.Amy Sherman-Palladino became the first woman to win an Emmy for Outstanding Comedy Writing and an Emmy for Directing a Comedy Series in the same year. With back-to-back wins, the consistently unconventional Sherman-Palladino double-fisted golden statuettes, saying, “My father inspired this, weirdly I had to turn a six-foot-two Bronx Jew into Rachel Brosnahan, that’s showbiz.” She went on to carefully, authentically, give thanks to her crew, citing the importance of union workers.

9.Rachel Brosnahan wins Outstanding Lead Actress in a Comedy Series for “The Marvelous Mrs Maisel.” This is your annual reminder that Rachel Brosnahan isn’t any more Jewish than Kathryn Hahn. But Amy Sherman-Palladino and Daniel Palladino, who Brosnahan “will be thanking for the rest of my life for trusting me with your Midge” is.

10.Michael Douglas delivered one of the funniest bits of the night. With the combination of comic timing and dapper charm that reminds us why we fell in love with him one million decades ago (well, it feels like that), Douglas delivered a message to the night’s losers. “Carry that rage,” he said. “Let it fuel everything you do from this night forward. You were cheated. You were robbed. That’s a fact.”

11.Maya Rudolph and Fred Armisen did a reoccurring bit. Sadly it was not funny, but it was still like seeing God walk on stage.

12.Jeff Daniels beats Michael Stuhlbarg for Best Supporting Actor in a Limited Series or Movie. But Michael still gave Jeff a one-man standing ovation, because that’s just the kind of mensch he is.

13.Rachel Brosnahan and Larry David did intergenerational comedy banter. (The Schmooze puts on her Jewish dad voice:) Make no mistake, the pairing of Larry David and Rachel Brosnahan — his awkward schlumpiness, her crisp aesthetic, his contemporary cringe comedy, her take on Borscht-Belt belly laughs — it was one generation of Jewish comedy wishing a l’chaim to the next! For this, we live.

14.Abbi Jacobson and Ilana Glazer presented John Mulaney with the Emmy for Outstanding Writing for a Variety Special. The “Broad City” women looked beside themselves. And by the way, Mulaney — who said his wife refused to fly across the country to watch him lose — is married to a nice Jewish gal.

15.Glenn Weiss, in the most unbelievable moment of the evening, called his girlfriend to stage and proposed to her.

16.Tina Fey introduced the moving In Memoriam segment. In an evening that was otherwise gracelessly produced, the memorial was a stirring tribute to the major losses sustained in the world of entertainment. Among the many beloved names, were many, many Jewish ones, including: Anthony Bourdain, Craig Zadan, Dick Enberg, Lee Miller, Bob Schiller, Charlotte Rae, Mitzi Shore, and Neil Simon.

17.Regina King Won Lead Actress in a Limited Series for Netflix’s “Seven Seconds.” King isn’t Jewish, but her tattoo is. Here we hand it over to our friends over at Kveller.

We too were wondering about Regina King’s tattoo! It’s apparently Aramaic for “unconditional love”. She got a matching tattoo of it with her son before she took him to college. ?#Emmys https://t.co/WQoxU28DUS pic.twitter.com/SZFZ0URpNy

18.Joe Weisberg and Joel Fields won Outstanding Writing for a Drama Series for “The Americans.” This is Fields and Weisberg’s first win in six seasons of the super-nominated show, which aired its finale in May.

20.The chairman of the Academy shared a lovely video highlighting the Emmy’s best moments of representation. It included clips of Barbra Streisand, Sarah Silverman, and Julia Louis-Dreyfus, who was sorely missed all evening.

21.Lorne Michaels, the grumpiest-seeming man to ever run a comedy show, accepted the award for Outstanding Sketch Series for Saturday Night Live. The show beat out Sarah Silverman’s “I Love You America,” and “Portlandia” among others.

22.John Oliver delivered the best Glenn Weiss joke. Oliver (who is not Jewish — they can’t all be ours) joked, “On behalf of everyone I’d like to thank Glenn Weiss’ fiancee for saying yes, this could have been a really different evening — you really came through.”

24.”The Marvelous Mrs. Maisel” won Outstanding Comedy Series, beating “Atlanta,” “Barry,” “black-ish,” “Curb Your Enthusiasm,” “Glow,” “Silicon Valley,” and “Unbreakable Kimmy Schmidt.” It’s such a big moment for Jews telling stories about Jews! Only a truly rotten person would observe that as the “Maisel” crew swept off the stage, Kelly Clarkson’s friend said something to her and Clarkson nodded, looking exhausted. Is it possible her friend said, “Let’s go home and watch ‘Blackish’”?

25.”Game of Thrones” won Outstanding Drama Series. We at the Schmooze were all ready to go home, but then a pair of people named DB Weiss and David Benioff accepted the award and thanked someone else called Bernie Caulfield, and we were forced to turn back, like a guest trying to sneak out of bat mitzvah party with a schmear in hand, just as her name is called for the candle-lighting ceremony. You did it, Jews! You won almost everything. Now let us go to bed.

Speaking of endless experiences that stretch on late into the night but vary little year to year, Yom Kippur approaches. Last call for reflection and hydration, folks. Dream of the proud Jewish parents wishing their children mazal tonight, dream of future female hosts, dream of the day Julia Louis-Dreyfus, in total remission and good health, returns to the Emmys where she belongs.