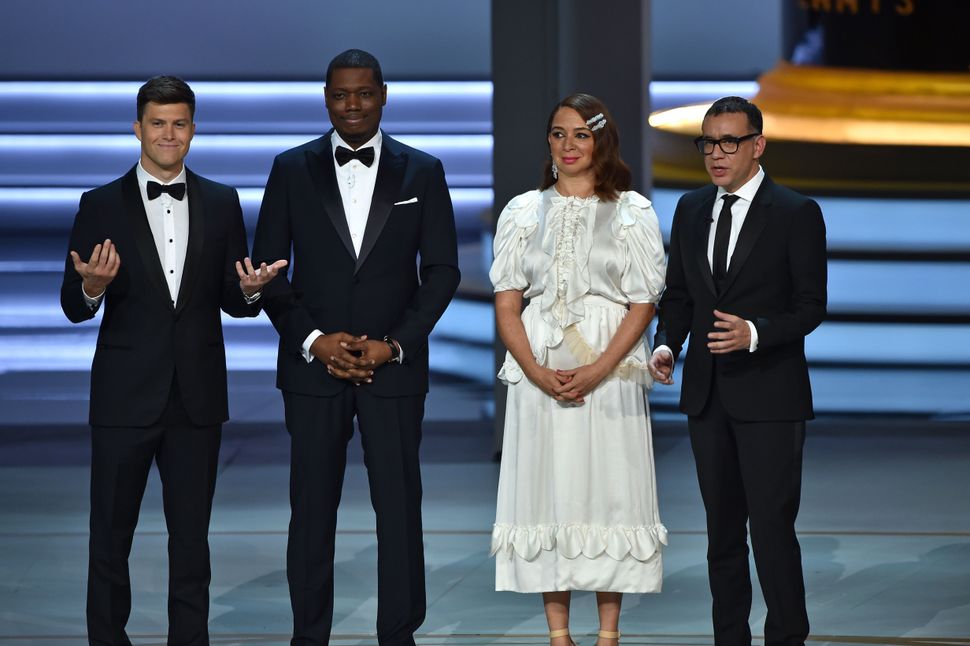 The 70th Annual Emmy Awards, hosted by Colin Jost and Michael Che, exceeded all expectations: They were even more egregiously unfunny than detractors could possibly have imagined. Haters of bloated award shows, haters of the Saturday Night Live Weekend Update hosts, and people angry to be awake late on a Monday united in disparaging the desperately unfunny evening that was made occasionally charming by winners’ speeches.

Jost and Che lost their audience weeks, if not years, before taking the stage — “It is kind of fun for us to do something that is not political,” Jost said in a pre-Emmy interview with Vanity Fair. He added that by the time of the Emmys, “People are going to be desperate to give men a chance, finally. It’ll probably be #HeToo by then.”

The main issues here are that this joke has no comedy content and makes light of a movement that exists to relieve centuries of sexual assault and oppression.

Michael Che, of course, shouldn’t be smeared for his co-host’s remarks. He should be smeared for reasons all of his own devising, such as mounting an emotional defense of Louis CK’s “right to make a living” by performing in a top comedy club less than a year after admitting to serial sexual harassment.

No wonder by the time they took the stage, both men looked like funeral chaplains at a federal prison, obligated to conduct a burial for a child kidnapper. With the small-town defiance of little boys called to the principal’s office, their shared monologue hit all the classics laughs: Nazis are bad, the show we’re watching right now is boring and we, the audience, is stupid for watching it, the struggling finances of the National Broadcasting Company, and the hard-hitting critique that “This Is Us” is a sad TV show. It was exceedingly hard to remember that Jost and Che have done live TV comedy before. Indeed, it is their weekly gig.

But it takes a village to make comics like Maya Rudolph and Fred Armisen look bad. In fact, 16 writers collaborated on the Emmys, including Che and Jost. 16 writers, and the greatest comedic performers alive — together they made plenty of topical jokes targeting the current administration and the villains of the #MeToo movement. So why did so few of them land? Why was Hannah Gadsby’s 1.5 minute standup bit about #notallmen so much funnier than Che and Jost’s 7.5 minute droning on about Ronan Farrow and drunken sexual harassment?

Leaving aside the fact that Gadsby has greater comedic skill, the defining difference is in the writers — while Gadsby wrote her own bits, Che and Jost wrote their jokes with an army of almost entirely men. 13 out of 16 of the writers of the Emmys were men. They hired three women and thirteen men to write three hours of jokes, about half of which were about issues of gender parity and other forms of equality.

No wonder the evening’s hosts seemed resentful and bored. That’s the natural consequence of thirteen men getting together to write jokes about feminism that they don’t believe in. Che and Jost did not want to be “political” — i.e., they did not want to make comedy about people other than themselves. They did not hire almost any people unlike themselves, and they did not please anyone. Plenty of attractive, privileged, straight men — even white men! — have proven that they perform gracious comedy by absenting their egos and making room for different voices. Consider Seth Meyers, who does it by hiring a dynamic writing staff and accessing a deep compassion for other types of people, or Jimmy Kimmel, who does it by being so chilled out that he creates plenty of room for other stars to shine.

When Michael Che joked about race, it was sometimes funny — maybe because it seemed like he believed what he was saying, instead of seeming like he was reading nutrition facts off a label.