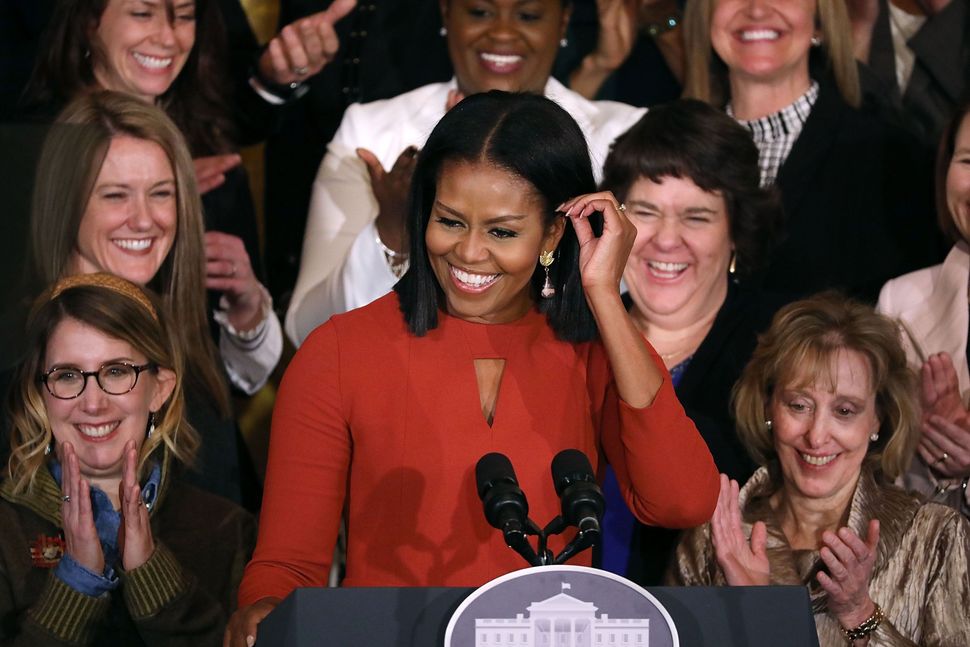 Hold on to your huts, friends: As Jews around the world prepared for the festival of Sukkot this weekend, two Jews got married under a shelter of peace — guided by none other than Michelle Obama.

The former first lady led a young Jewish couple in a recitation of their wedding vows in the heart of Chicago. Stephanie Moelis Rivkin and Joel Sircus were married on Saturday, September 22 on the banks of Lake Michigan, with views of the Chicago skyline, under a snow-white chuppah. And although the New York Times announcement of their wedding lists the couple’s friend Robert Dresser as the ceremony officiant with another friend, Meredith Potter, directing the vows portion, a cell-phone video of the event captures Michelle Obama in that role.

That footate, originally taken for an Instagram story by the bride’s cousin Tina Newman and obtained by TMZ, shows Obama in a floor-length, long-sleeve black evening gown, reciting a line from the couple’s wedding vows and holding up the microphone for the bride to repeat them after her. Obama, who will begin a 10-city book tour this November to promote her new memoir, “Becoming,” can be seen grinning in the video as light wind buffets the walls of the rose-accented chuppah. “I promise to stand next to and support you through all of life’s trials and triumphs,” she prompts the bride.

Rivkin and Sircus met and started dating in high school. Sircus followed Rivkin to Yale, and the couple dated on and off for 10 years. But Rivkin’s connection to the Obamas is even more long-term. Rivkin’s father, Robert S. Rivkin, is the deputy mayor of Chicago, the city the Obamas have long called home. And President Obama appointed her mother Cindy Moelis, now Executive Director of the Pritzker Traubert Family Foundation, as Director for the Presidential Commission on White House Fellows in 2009.

Congratulations to Stephanie and Joel on having the best surprise wedding officiant imaginable, for being one of the least annoying-seeming couples to ever grace the pages of the New York Times vows section, and also on your marriage.