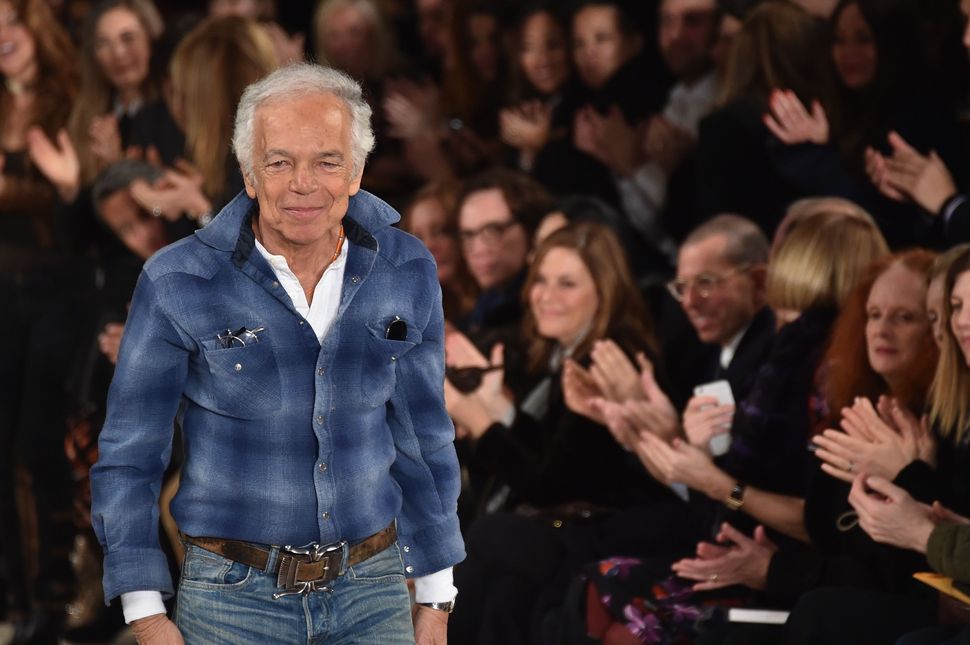 This year, Ralph Lauren brand is celebrating 50 years as the brand that has come to define American style — the louche denim jackets, the mix of Western rugged with WASPy prep. And in honor of that, Town and Country sat down with the iconic Jewish designer for an interview in the recently released November issue. Here are some highlights:

1) He loves the movie Rocky and uses it as inspiration to overcome adversity: “You make mistakes, you get up. I’m a big Rocky fan.”

2) Comfort supersedes all, including talent: “People want to be comfortable. It’s not that I’ve created the best furniture in the world, but I think I have the ability to link it all together and make a place feel like you want to be in it.”

3) Ralph Lauren wouldn’t be caught dead sleeping on flowered sheets: “I remember walking into a department store with Ricky years ago and seeing flowered sheets and saying, “I’m not sleeping on that.” So I started my home furnishings line. My first sheets had button-downs like oxford collar shirts.”

4) The Ralph Lauren brand was never about the fashion: “When I started out, my goal was to express myself. I designed these ties and then went around in my bomber jacket and jeans. Bloomingdale’s said they liked them, but they wanted me to make them narrower and put a Bloomingdale’s label in them, and I said I couldn’t do that. Six months later they came back to me and said, “Okay, we’ll give you your own rack, and they can carry your own label.” And after that I started doing shirts and went on from there. It wasn’t about fashion, it was about what I wanted. And then, all of a sudden, I realized I was building a world.”

6) Ralph Lauren is all about putting in a lot of effort, but making the result look effortless: Like the way he hired a trainer to perfect his pitching arm to throw the ceremonial first pitch at the Yankees game late last month. Or this quote: “I remember watching Joe DiMaggio as a kid: It all looked so easy, so smooth—like Federer now. He doesn’t look like he’s killing himself. I want my clothes, my stores, everything I design to have that feeling of being natural and easy. And that takes effort, but you try not to have it show.”

7) Ralph Lauren is a family man: The interviewer pointed out the presence of Lauren’s grandchildren’s strollers on his front porch and Lauren admitted that they made the garage of their Montauk home into a screening room “so our kids would come.”

8) Ralph Lauren still gets nervous that people won’t like his designs: “It’s my 50th anniversary and I’m still worried. I don’t take anything for granted. I do what I do, and I have an audience that I speak to, and I go for what I really believe, but I know not everybody thinks I’m great.”

9) To Lauren, philanthropy is personal: Ralph Lauren had a brain tumor 30 years ago and that put him on the path to philanthropy. “As far as philanthropy is concerned, I have never done anything for effect, only if I have been interested in it…I don’t want to be remembered only for selling thousands of shirts.”