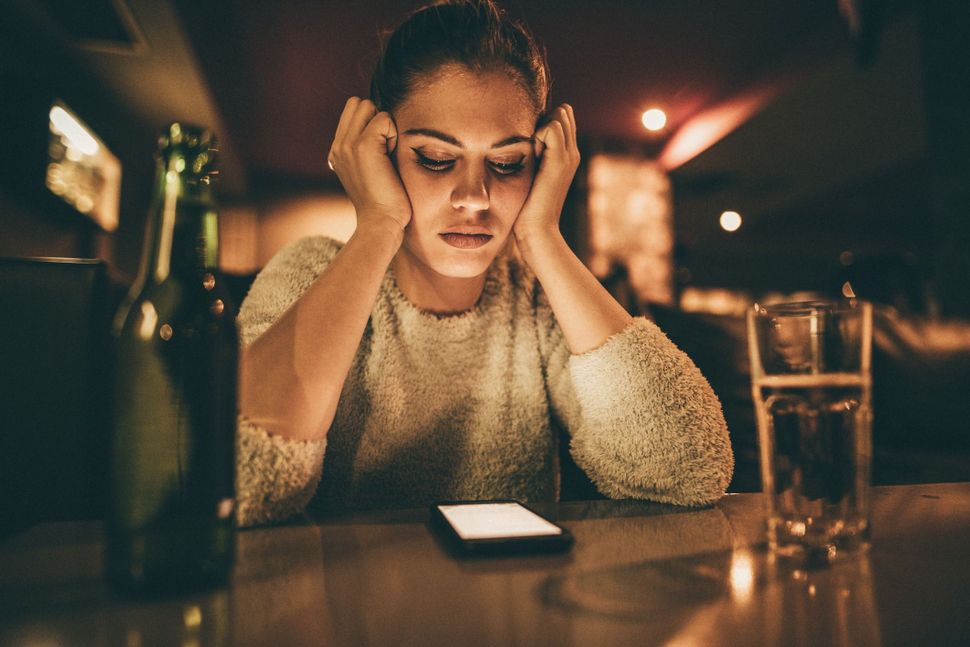 These days, many single Jewish New Yorkers spend hours each week swiping right or left, enchanted by what seems like an unlimited array of potential mates on apps like Tinder, Bumble and OKCupid.

But with the approach of Halloween (not a Jewish holiday, but one for which many Jewish singles will nevertheless turn up at parties dressed as Jedi knights, brides of Frankenstein, or wives of Donald Trump), we’re seeing a lot of “ghosting” – defined as disappearing, without explanation, from online interactions, in-person dates that seemed to be going well – even relationships.

This phenomenon prompts the question: Does the increased volume of online interaction and dates lend itself to forming richer, more fulfilling real-life relationships or, in an increasingly virtual world, are our so-called connections in fact “ghostly” (ephemeral and lacking in substance?) And if so, what’s a single Jew to do?

New York City Jewish dating experts say that the launch of Tinder in 2012 sparked the start of a dating deterioration, in which a throwaway mindset began replacing more traditional values of focus, respect, and politeness when it comes to dating.

It’s not necessarily the fault of individuals, say some, but of technology.

“It’s the system, it’s the culture, it promotes ‘swipe, swipe, swipe,’” said Michelle Frankel, owner of NYCity Matchmaking, a New York-based matchmaking service that specializes in Jewish clients. “Apps are very one-dimensional, based on photos with little information, and many people use it as a self-esteem meter, like, ‘Oh, this hot girl or guy likes me,’ and then let it fall by the wayside and don’t follow up.”

Then, Frankel explained, those who are serious about finding a mate get burned out, and are less inclined to respond when they get a message, which creates a vicious circle of “short-term ghosting” – or disappearing after a few flirtatious interactions.

That may be okay, say some.

“At what point is it ‘ghosting,’ and at what point is it, ‘He/she is just not that into you?’” said Melanie Notkin, author of “Otherhood,” a memoir and journalistic report on single, childless women in U.S. cities including New York and Los Angeles. “We notice ‘ghosting’ when we’re interested; if not, we might call it ‘relief.’ Putting a label on it, and understanding it only as having mal-intent, serves no other purpose than to feel badly about oneself … Sometimes it’s best just to let it go.”

The real issue that haunts Jewish and other singles, however, could be termed “long term ghosting” – or, going on multiple dates, feeling like one is in a quasi-relationship or actual relationship, and then being “ghosted” – or disappeared on, without explanation.

Seth (name has been changed), 49, a Bronx attorney, told of being “ghosted” by a female rabbi.

“This woman was pressuring me for an exclusive relationship pretty quickly – and other things just felt off,” he said. “When I started probing a little because I was suspicious, I realized I was the ‘other’ man.”

Seth says he uncovered “concrete evidence” of the woman’s romantic involvement with another man in the form of online video, and tried to talk with her about it, whereupon “she immediately blocked me.”

Shortly thereafter, his former flame married the man Seth had discovered her with online.

“He was an international businessman, handsome, and he said everything you’d want, as a 45-year-old woman who wants a child, including that he wanted to have a child also,” Aviva recalled.

Andrew, who was in his early 50s, took Aviva on several dates to Blue Water Grill and other upscale restaurants in the Gramercy and Flatiron neighborhoods of Manhattan, she said, adding he “wooed me with charisma, looks, and the promise of a future that hinged on the same kinds of things I want.”

After several dates, the two had sex – a rarity for her because she is seldom intimate without explicit decision to be in an exclusive relationship, Aviva says. The next day, Andrew told her he was traveling to Philadelphia for the Superbowl. He called her on his way there to say hello.

“He never followed up after that; just withdrew,” recalls Aviva, who said she texted him twice afterward and received no response.

Aviva felt especially stunned because Andrew had struck her as the kind of “nice Jewish man” she’d hoped to marry, she says.

This kind of ghosting is a red flag, according to Dr. Ruth Westheimer, renowned sex therapist and author of more than 40 books on sexual wellness, as well as the newly released graphic novel “Roller Coaster Grandma” co-authored by Pierre Lehu.

“Anyone who disappears is not worth your attention,” Westheimer told The Forward. “So, if he disappears, ignore him, even if he comes begging, and the same thing if it’s a she.”

If you’re the one who isn’t interested in another date, remember to be ethical and not ghost, Westheimer added.

“Not responding is not polite,” said Westheimer. “If you are not interested, say so. If it’s awkward, then a white lie is okay. Say, ‘An old flame came back into my life, sorry, I wish you all best, period.’ Always wish them good luck. Not into lengthy discussion.”

Notkin says, “It’s a good reminder to enjoy the moment and not think of a great time as feeling ‘ghosted’ afterward if you don’t hear from your date, but that you had a really great date or two,” she said. “It’s less disappointing if you don’t imagine what might have been but instead appreciate what was.”

She added that often, people’s reasons for “ghosting” have nothing to do with you, but with their own issues.

“Always give people the benefit of the doubt, try not to take things personally, and just keep going.”

Heather Robinson contributes regularly to The New York Post, and has written for The Wall Street Journal, Time Out New York, The Huffington Post, The New York Observer, and others. Twitter: @HE_Robinson