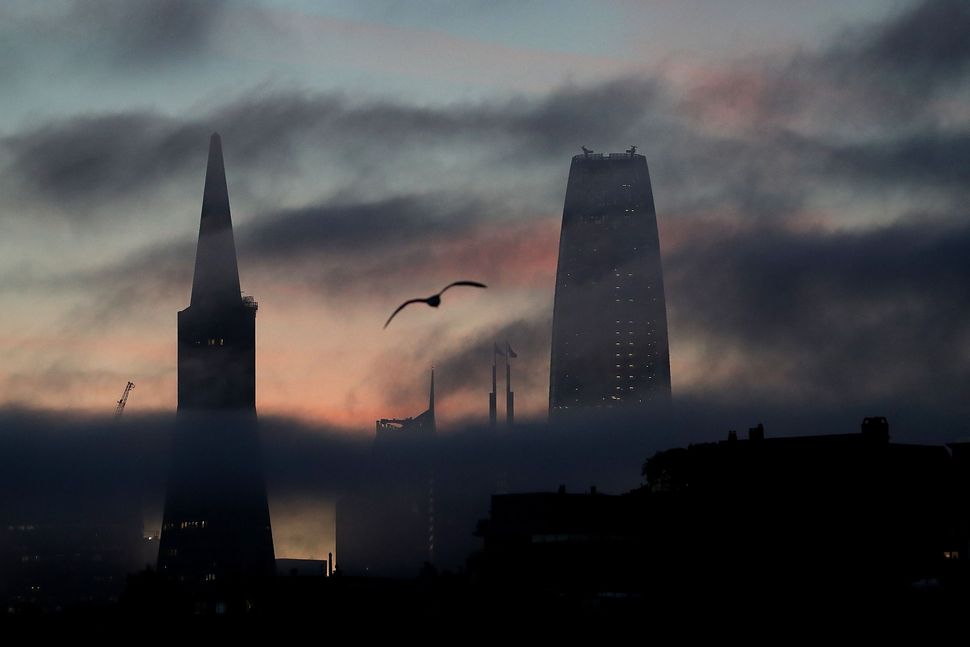 The quirkiest reason to say “Thanks, Jews!” this week: the Salesforce Tower in San Francisco treated “Lord of the Rings” fans to a fiery surprise on Halloween.

Salesforce, the hulking brainchild of Jewish entrepreneur Marc Benioff, initially didn’t see eye-to-eye (if you will) with a petition crafted by diehard fans requesting that the skyscraper turn itself into the Eye of Sauron. But perhaps because the petition accumulated over 11,000 signatures, or perhaps just in the spirit of endearing tech-y dorkdom, Salesforce relented.

The company used LED projectors to generate the image of a massive eye engulfed in flames, the symbol of evil widely recognized by fans of JRR Tolkien’s cult classic “Lord of the Rings.” Does that mean tech-heavy downtown San Francisco is the equivalent of Mordor, the most vile corner of Middle Earth? Benioff, who for his part is currently working to aid San Francisco’s homeless residents, did not weigh in on this question.

Quinn Reilly, the creator of the petition, gathered a viewing party on Halloween, which was prefaced with a cryptic write-up, “we can neither confirm nor deny whether anything will happen with the Salesforce Tower on Halloween, but just in case, we’re going to gather.” Spooky. Or, potentially, just nerdy.

You asked, we listened. #EyeOfSauron#EyeOfSFhttps://t.co/doCo22YZp0

Twitter exploded in giddy delight, basking in the playful display of evil illuminating San Francisco on Halloween night. The joy was hobbit-level ecstatic:

This is just great except that tomorrow darkness will fill the sky while Ringwraiths circle the tower on leathery flying beasts, striking terror into the heart of everyone who hears their soul-chilling shrieks on the wind. Who will stand against them when all seems lost? #EyeOfSF https://t.co/ypIsg3MLs0

For it is as Tolkien would say: Not all who wander are lost, and no one can be lost when an enormous, gleaming magical eye lights up the city skyline.