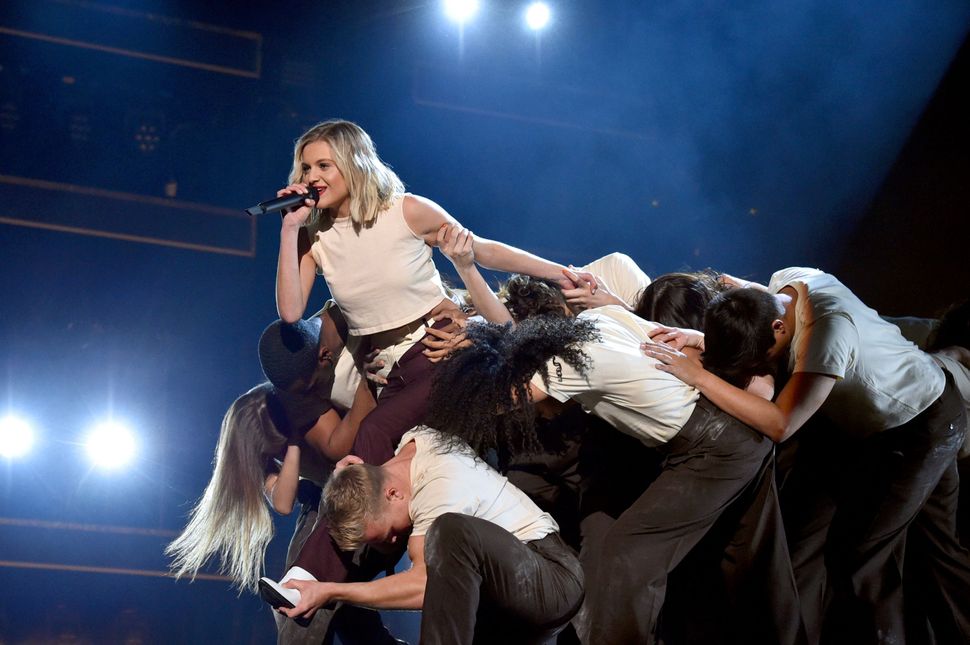 Contemporary Israeli dance and country music. It could be a match made in heaven.

When 25-year-old country music sensation Kelsea Ballerini performed her hit “Miss Me More” at the Country Music Awards on Wednesday, responses were mixed. Reese Witherspoon called it fire emoji. Many fans complained that the electric performance was too skewed towards pop music, rather than country.

And in a social media post that’s gone semi-viral in the dance world, Ohio State University dance and history student Laura DeAngelis pointed out that Ballerini’s dancers are doing something that looks very, very familiar.

In the performance, the Female Vocalist of the Year nominee’s dancers are arrayed behind her in a semi-circle, legs hips-distance apart, in front of chairs. They sink, synchronized, down onto the chairs before contracting, seemingly-electrified, and writhing into primal positions. They move as a wave. They wear identical, unisex outfits: black pants, white shirts.

From the punched, stylized movement to the chairs and stage layout to the outfits, the performance is glaringly similar to Israeli choreographer Ohad Naharin’s radical piece with the Batsheva Dance Company to the song “Who Knows One,” or, “Echad Mi Yodea.” That work, a segment of the 1998 “Minus 16,” is one of the greatest pieces of contemporary Israeli art as well as a vital piece of Israel’s social history — after the Batsheva Dance Company was told dancers must wear modest costumes for the duration of the performance, the company chose to drop out of Israel’s 50th anniversary celebration rather than accept what they saw as creative censorship.

Naharni’s 1998 masterpiece has been performed by companies throughout the world. It’s a deeply Jewish, and deeply Israeli piece. It’s also tremendously distinctive — besides the stylized outfits and stage look, it’s a prime example of Naharin’s signature dance style, “Gaga,” a movement system that Naharin invented. Gaga is a primal expression of the body’s personal relationship to music and movement, that asks dancers to access their inner sublimity and express it physically. So if Ballerini’s choreographer indeed lifted from Naharin’s dance, he or she skimmed from a whole library of aesthetics, design, historical context, religious significance, and dance philosophy.

Ballerini, though an influential artist, is likely not the culprit behind the choreography, which was unique to her performance of “Miss Me More” at the CMA Awards. “We spent two full days with a choreographer,” Ballerini told a reporter for Entertainment Tonight. “We have 16 dancers, and basically, every dancer represents the things that you have to fight away from yourself, so like, insecurity or fear or anger or whatever it is that you struggle with, and it’s the push and pull of those things throughout your life.”

In a post on Facebook, the dance company wrote, “Over the past few days, we have received many messages from friends about the extraordinary similarity between Kelsea Ballerini’s CMA performance and Ohad Naharin’s “Echad Mi Yodeah.”

“Come watch the real thing,” they added, promoting upcoming Batsheva performances that will include the famous number.

We have also reached out to Ballerini, but have not received a comment.

In her performance, Ballerini strips off her first outfit, and each of the 16 dancers eventually fall away. Taste of Country called it the night’s “break out performance, literally” and lauded the background dancers for “stealing the show.”

Kelsea Ballerini and ensemble perform “Miss You More” at the 2018 Country Music Awards: