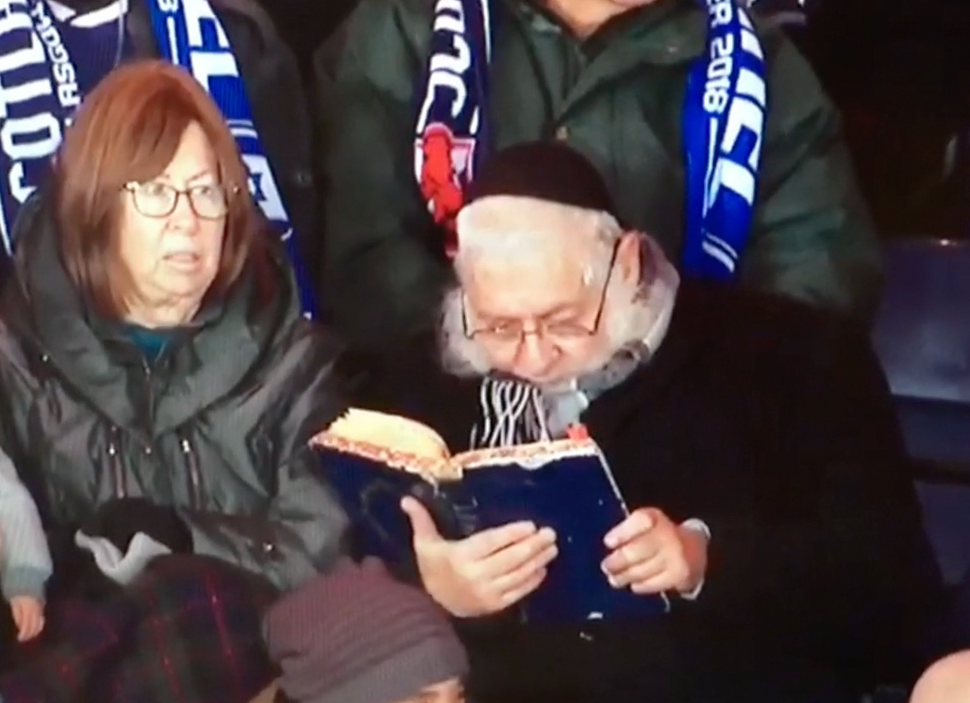 Rabbi Zev Leff never set out to be a viral star — he just wanted to get in some Torah study.

But the Haredi rabbi of Moshav Matityahu, located near the Israeli city of Modiin, became an accidental sensation when a stadium camera caught him studying at the Israel-Scotland game in Glasgow.

Rav Leff was apparently visiting his daughter, Rebbetzin Sarah Bodenheim, and accompanied members of her family to the game. In a clip that has torn through the Orthodox world, the Sky News camera panned to Leff’s family just after Israel scored its first goal. Leff, snug in a coat, scarf, and kippah, is buried in a thick tome with a weathered looking cover. The title is not legible, though YNetnews posits that it’s Gemara.

“I think he missed the goal,” one of the commentators laments, as Leff is seen buried in text. The camera stays squarely on the Rabbi, who is immobile except for his eyeballs, seemingly unaware of the commotion around him. Next to him, people who appear to be his wife, daughter, and grandchildren, watch the game.

“Must be a good read,” another commentator chuckles.

Leff eventually looks up, penetrating the camera with a glance that says, “I will never, ever be shamed over my holy study, no, not even by charming Scottish sports commentators.”

When you’ve got football at 7, but Maariv at 8 #SCOISR pic.twitter.com/Y3opdikoDj

It is, without doubt, the most charming thing on the Internet right now.

“If for one second there would be no one learning Torah anywhere in the world,” Rav Leff said in a lecture called “Torah Learning Is Everything” in 2015, “The world would cease to exist.”

Just goes to show — anyone can study text, spend time with family, take in culture, and achieve viral fame, all at once.

That’s some size of match program for the Scotland game. #SCOISR pic.twitter.com/FxdfOC9m0E