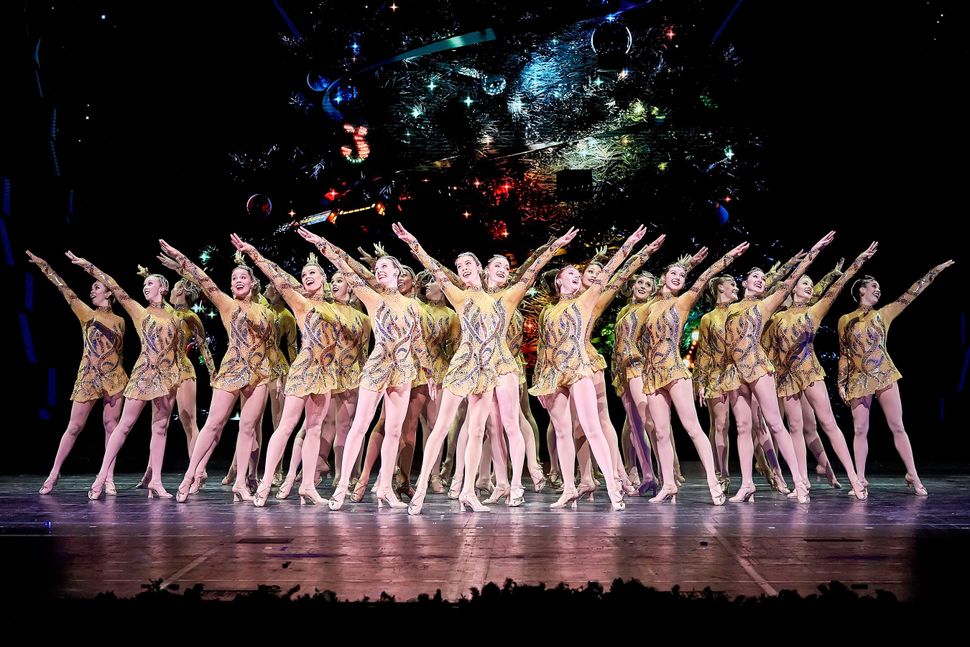 While the audience gets settled into their seats for the evening performances of this week’s Radio City Music Hall Christmas Spectacular — tucked behind the curtain, several cast- and crew-members recite Hanukkah prayers in unison and light a menorah to celebrate the holiday.

Five minutes before the curtain goes up, this thirty-year tradition is led by Eric Titcomb, the hydraulic control board operator affectionately dubbed “Rabbi Eric,” who dons a yarmulke and hands out Hanukkah gelt for the occasion. 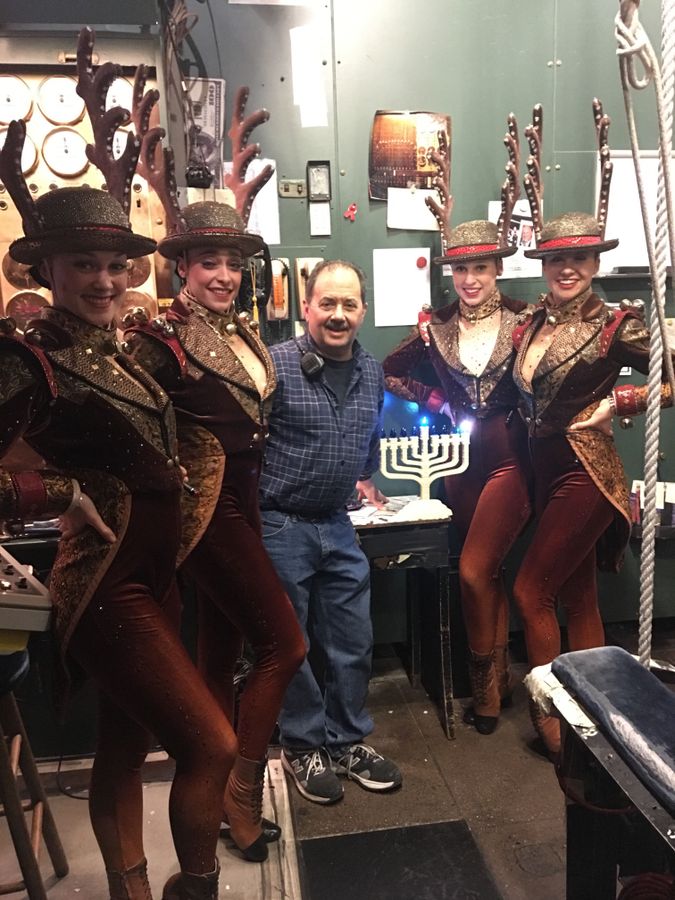 The Rockettes’ Jewish crew-members light the menorah backstage before the show.

Among those joining Eric to celebrate the holiday are Nicole Baker, Alyssa Epstein and Megan Levinson, the three Jewish Rockettes that are part of the 80-member team.

Baker, 37, now in her 13th season as a Rockette, was raised in a Conservative Jewish family in Tampa and can recall watching the television broadcast of the Rockettes performing in the Macy’s Thanksgiving Day Parade. “Years later, when I became a Rockette and got to perform on TV in the parade, it was the most surreal feeling in the world,” she gushes.

Today, Baker and her husband have four children ranging from 5 months to 8 years old. Due to her performance schedule, sixteen shows a week, her family often improvises by celebrating Hanukkah in the morning with the kids.

While Baker might be in the Jewish minority among the Rockettes, she says it’s not uncommon to hear the ladies singing Hanukkah songs in the dressing room. “Katelyn Gaffney, a Rockette who is not Jewish, even learned the Hanukkah prayers and joins us for the candle lighting at night,” Baker says. “One time the other women surprised me by wrapping my entire dressing station along with all my accessories in Hanukkah-themed wrapped paper, which was quite a sight.”

This year, Alyssa Epstein, 37, also in her 13th season as a Rockette, was thrilled to have her parents, brother, sister-in-law and 5-month old nephew come to the show on the first night of Hanukkah: “My mother Fern is an amazing cook and brought potato latkes and homemade rugelach for everyone, so we had a latke party backstage in between shows.”

Epstein, who began dancing when she was two years old, saw the Christmas Spectacular with her grandmother Irene when she was eight, and it became an annual tradition. Epstein says she inherited her grandmother’s love of dance and theater. “My bat mitzvah theme was ‘Alyssa on Broadway,’” she says.

Levinson, 29, a New Jersey native now living on Manhattan’s Upper West Side, also had a performance-themed bat mitzvah where all the guest tables were named after a style of dance. One of Levinson’s fondest Hanukkah memories in her nine seasons as a Rockette has been teaching all the other Rockettes how to play dreidel in the dressing room.

“Our show is amazing and is about bringing people together to celebrate as one big family,” Baker says. “It has nothing to do with what religion you are, it’s just a magical place to be.”