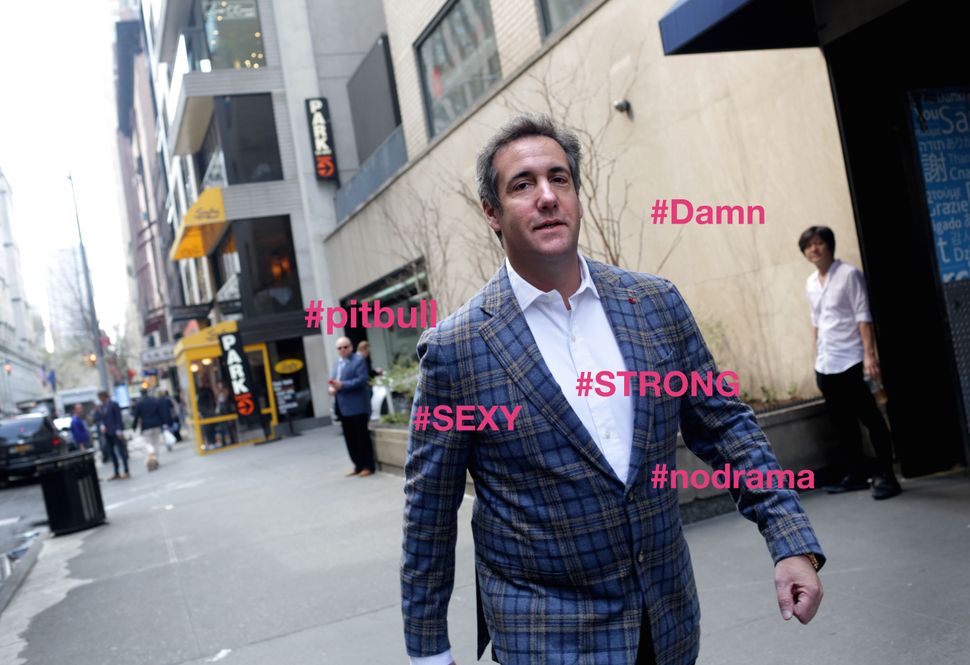 Michael Cohen: In his own words Image by GETTY IMAGES/FORWARD MONTAGE

Who has two thumbs and thinks Michael Cohen is a “strong, pit bull, sex symbol”?

A major report by the Wall Street Journal found that former Trump attorney Michael Cohen paid RedFinch Solutions, LLC to rig polls in the 2016 presidential election to benefit President Trump. According to the Journal, Cohen also paid the tech firm to create a Twitter account called “Women for Michael Cohen.”

Need we say it? Michael Cohen has been sentenced to three years in prison for campaign-finance violations, tax evasion and lying to Congress. He is, in other words, exclusively nonsense.

“Women for Cohen” burst into existence on May 2nd, 2016 in classic fashion: by quote-tweeting an article by the Forward.

Get a closer look at who Cohen really is!https://t.co/txUNKYdjTy

Too (im)pure for this world, the account continued for fewer than eight months, in which time it managed to put out such delicious social copy as this:

Get on board or get run over! Pit bull @MichaelCohen212 defending #Trump2016 #mondaymotivation https://t.co/Q34WMmWPl0

The account worked hard to associate Cohen with the nickname “pitbull” also referring to him as a “big shark” as well as “#justice” and frequent references to his physical sexiness.

Perhaps there is a tweet for every occasion. For the occasion of Michael Cohen apparently having paid for a specific pro-Cohen women’s Twitter, we do humbly offer this tweet:

In a world of lies, deception, and fraud, we appreciate this honest guy @MichaelCohen212 #tgif #handsome #sexy pic.twitter.com/9cXogBVIkF