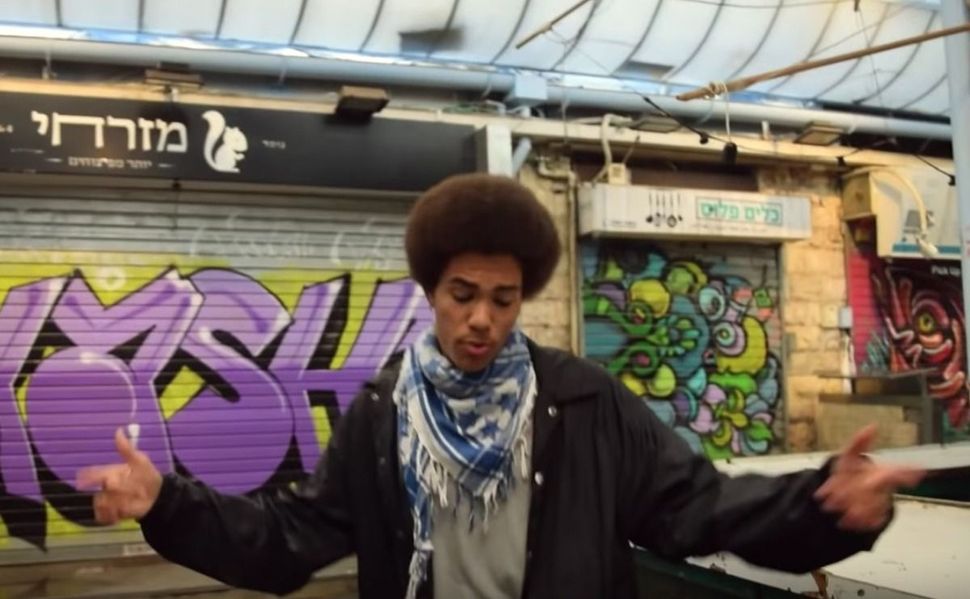 In 1939, Zionism was a grand adventure, water to parched lands, philosophy and dancing under the stars.

And for decades now, in progressive circles where the issue of Jewish nationalism was formerly hot-button — it is almost entirely taboo. For some of the loudest, youngest Americans, Zionism is a label that has become synonymous with colonialism and oppression.

On college campuses, anti-Israel groups erect walls, eject detractors, blackball, and cancel. Anti-anti-Israel groups aim to expose their opponents and destroy their futures. Both sides claim that they are being robbed of a safe space, and both sides call that claim an attack on freedom of speech. There’s no conscription or authentic hummus, but it’s a lot like Israel.

Who will take note of these coeds’ suffering and bring them out of such a narrow-minded place? What prophet could be quick of speech and fast of tongue enough?

“The students all actin’ stupid and thinking they’re makin’ differences/Pickin’ and choosin’ truths and not knowing what real resistance is/Say you value social justice — are you kiddin’ us?/What the hell gives you the right to tell me who’s indigenous?” raps Young Gravy in “Diaspora,” sounding for all the world like Lin Manuel Miranda on Birthright.

The 19-year-old, a former army brat and current college sophomore at George Washington University, has won the support of people like Israel ambassador Dani Dayan and Adam Milstein with a series of tracks that venerate Jewish peoplehood and the Jewish state.

In a video the longtime songwriter self-produced and personally funded, Gravy raps in Hebrew about Ethiopian Israelis in the Jerusalem shuk, a blue and white keffiyeh wrapped around his neck. He filmed the video during his time in Israel as a participant on the Hasbara Fellowship, a group run in part through the Israeli Ministry that trains college students to advocate for Israel on campus. In his brief free time on the immersive program, he and a friend shot b-roll throughout Jerusalem.

Like a minyan turning eastward, his work returns again and again to the link between historic Jewish and black oppression. In the painfully clever “Stereotypes,” he spits line after line about assumptions he faces as a black person and a Jewish person. “Crack rock dealer/I’m a baby killer/Baby mama drama/Droppin’ bombs in Gaza/I’m up in the kitchen whipping up a brick/Disrespecting women/Sipping on a fifth/Then I think to myself — should I spend it all on gold chains, or keep all the wealth?”

We talked to Young Gravy — “You can call me Noah, ma’am” — about Am Yisrael, institutionalized racism, and teaching Hebrew school.

The Schmooze: Talk to me about your Judaism.

Young Gravy: I was raised Jewish. It was never something that my parents had to really push. There was never really a question for me about whether or not I wanted to be Jewish — I just was.

Every Jewish parent wants to know the magic formula to get kids like that.

For [my parents] it was really important to bring us up from a young age to be proud of our culture and heritage. They’re both Jewish, but neither of them were raised extremely religious. They wanted to make sure we had a culturally full upbringing and an understanding of who we are.

We’re very close, all of us. I have three siblings. I think part of the reason we’re so close is that we’re always moving from place to place. Depending on where we were living, we’ve gone to synagogues and schools — some Reform, some Reconstructionist, some Conservative, various youth movements.

For me, Judaism has always been more than just a religion — it involves a very cultural and ethnic background. It extends beyond denominations.

What do your parents think of everything you’re doing?

My parents are extremely proud. I grew up listening to music they played including a lot of old school hip hop. I think it brings some pride to them knowing that we feel connected and proud of our identities.

Some of the most influential artists to my life and music have been Tupac and Bob Marley — Marley told stories about overcoming obstacles and oppression. Something my parents really taught me about being black and Jewish is about overcoming struggle, and telling stories of struggle.

Tell me about your relationship to Israel

My parents have never been to Israel but it’s something they always wanted to do. Maintaining the connection to indigenous homelands is really important to them. Whether it’s being part of the African or the Jewish diaspora, it’s a value to my siblings and me.

It seems like so many kids go through Jewish programming and still end up moving away from Israel. How did it become such a deep value for you?

I really believe that the Hebrew language and language in general is a gateway to culture. I think the language is inherently connected to the stories of the Hebrew revival — Ladino, and Judeo-Arabic, it’s really interesting.

I hear being pro-Israel on college campuses is really fun these days. How’s it going for you?

I’m the vice president of GW for Israel, which is the biggest Israel group on campus. We host debating events and educational events, and it’s also really important to me to highlight a lot of different aspects of the culture — we had an Ethiopian Israeli speaker come in and speak about her experience coming from Ethiopia to Israel and the significance of Sigd and had a symbolic break-fast meal co-sponsored by the Ethiopian-Eritrean association. I think hosting those kinds of cultural events in conjunction with political events is really important to community-building and representing Am Yisrael as a whole.

As far as other issues related to Israel on campus — as many college students do, we have to deal with a lot of anti-Semitism and divestment resolutions that come up. And our main goal is to stay strong in the face of that, and celebrate our culture and facilitate dialogue within our own community about what it means to be Jewish and what it means to be part of the nation of Israel.

I think really what it also comes down to is the inherent questioning of the right of Jews to have self-determination in our indigenous homeland. And that’s something you see with other indigenous groups all over the world — with Native Americans here and the questioning of their rights over their land, with Kurdish people in the Middle East and the question of their indigenous rights, as well as Berber people in North Africa, who’ve been completely discriminated against in an attempt to be erased.

Do you feel like your Black and Jewish identities intersect?

I was raised understanding the hardships and struggles and double standards people like me have to go through. We deal with cultural erasure to a certain extent. It think this is something [the song] “Diaspora” kind of hit on. Many Jews feel the need to closet their Judaism, closet their relationship to Israel if they want to be part of certain movements. I think the same thing goes with being black in America — having to hide aspects of your identity in order to be accepted in different spaces and viewed maybe as less threatening and more professional because of stereotypes and double standards.

I’ve experienced this in conjunction with anti-Semitism my whole life. My first experience with anti-Semitism, I was four or five years old and a classmate told me that I was not invited to their birthday party because I didn’t believe in Jesus. Later, when I was still a young child shopping with my mom I remember we would get followed around in toy stores by managers — that happened multiple times.

“Diaspora” appeals to people who identify as Zionists, who tend to have right-wing views. But right-wingers tend to be less strong on civil rights and anti-racism, which are also obviously important to you. How do you deal with that?

I think, regarding what you said about Zionism, I do have a little bit of pushback against that. I don’t think that Zionism is a right wing issue. I think it’s another aspect of liberation and connecting people to their indigenous homeland. Speaking from my personal perspective, that’s been fostered in my family in multiple aspects, as far as reconnecting with indigenous African traditions and heritage that have been erased as a result of the forced diaspora of slavery and colonialism and imperialism.

I have Native American heritage, which has also been erased in the United States. The US has erased the fact that this land that we live on belonged to Native people. Zionism is another way of reconnecting an indigenous people to their land who were erased by expulsion and genocide and imperialism, whether [by] the Roman empire or the Arab conquests. It inherently promotes liberation the same way black liberation and other liberation movements do.

What would you say to a person who said – but Noah, Palestinians are indigenous to the land! Shouldn’t they be reconnected to it, too?

That’s a conversation! I’m not against having a conversation. But I released this song about being proud of my heritage and the immediate response was — What about Palestinians? – when I didn’t say anything about Palestinians. I didn’t negate any of their claims. And that reminds me of experiences that I’ve had as a black man in America where any time I stand up and try to be proud of my heritage, people stand up and say – What about white people? — just because I expressed pride in who I am. And that’s just another way of trying to erase us and silence us.

At the end of the day we are who we are and can be proud of it. But every time I bring up my culture and traditions, I don’t need to have someone negate that.

It’s the equivalent to me of me saying Black lives matter and a person coming up to me and saying “All Lives Matter! What about white lives?”

I’m speaking from my perspective of being a black man and suggesting that there is an issue, like that there is a disproportionate use of force against black men in America. Every time I bring that up, someone wants to bring up an issue that they weren’t even talking about until I tried to bring up my heritage and experience.

What’s the story behind your rap name, Young Gravy?

It’s been a nickname that I’ve had since I was very young. I rap about my experiences, so I wanted to use something personal.

But how did you get that nickname?

That’s the million-dollar question! I’m not quite revealing that yet.