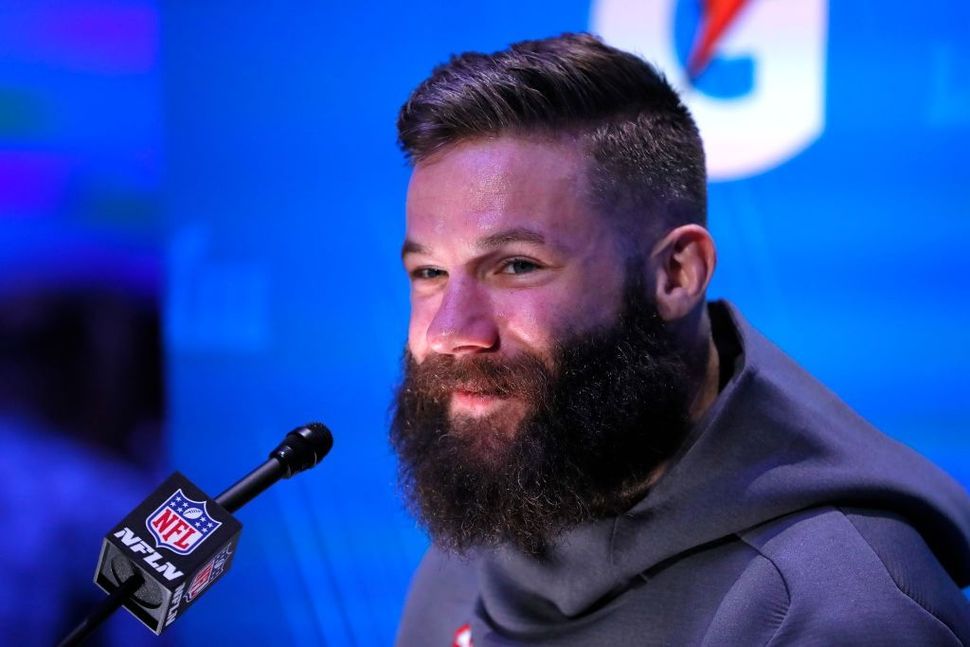 We don’t want to get too carried away by saccharine gestures made to stoke goodwill for a hated sports team which ultimately seeks to generate as much revenue as possible, but… dang! Watching Jewish wide receiver Julian Edelman validate a tween girl who was bullied for loving football is pretty heartwarming.

Ahead of the Patriots’ face off against the Los Angeles Rams this Sunday, Edelman surprised 13-year-old New Hampshire athlete Dejah Rondeau with a tour of the team’s trophy room by owner Robert Kraft, a game of catch, and tickets to the Super Bowl itself.

When he heard she was getting bullied at school, he had a #SuperBowlSurprise for her. pic.twitter.com/NVyhkfv8Hr

Rondeau “begged for years” to be allowed to play football — writing a letter to her mother explaining her dream, and working her way up from JV to Varsity on her middle school team, she explained in a 2018 interview with the online publication Seacoast. “She really believes she’ll be the first female quarterback to get a scholarship and play in the NFL,” Rondeau’s mother said.

Rondeau’s schoolmates didn’t agree. She has been bullied since she made it onto the team. “You have to be mentally tough to play quarterback,” she said.

The Patriots, getting wind of the interview, invited Rondeau to spend time with Edelman, the 32-year-old Californian whose jersey number she shares. “I hear we got a quarterback here,” Edelman said, shaking her hand. The two enjoyed a game of catch as Edelman told her, “I’m taking you to the Super Bowl, if that’s cool.”

Edelman added, “I heard about your story, about going out there and having the challenge and dealing with adversity because of people not accepting this, that. My respect level for you is just through the roof because you just ignored all the noise and played the game we all love which is football.”

“That — was crazy,” a rocked-looking Rondeau said, beneath a Patriots beanie. “I didn’t — I never knew — I never thought that could happen.”