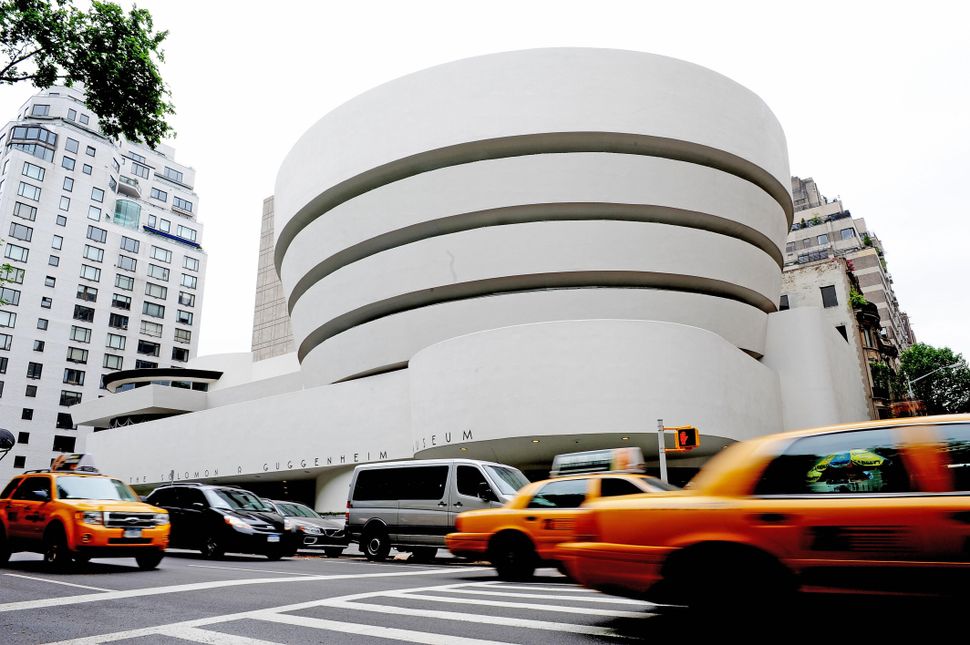 If you were at the Guggenheim Museum on Saturday you could have caught a free new exhibit, created by Jewish artist Nan Goldin and her group “PAIN” (Prescription Addiction Intervention Now.)

Around 6:30pm, flurries of fake scripts fell from the ceiling of the iconic building, proscribing Solomon R. Guggenheim 80 mg of OcyContin, to be taken 24 times per day. The doctor’s name: Robert Sackler, MD.

Goldin led a “die-in” at the Guggenheim Museum in Manhattan on Saturday in protest of the Sackler family, the billionaire owners of Purdue Pharma who are major museum philanthropists, Masha Gessen first reported for The New Yorker. Purdue Pharma is the manufacturer of OxyContin. Under the ownership of the Sackler family, the company pleaded guilty in 2007 to lying to doctors, drug regulators, and patients about the drug’s addictive properties, which have been cited as a major contributor to the opioid epidemic, which kills 130 Americans every day, on average.

Recently released pre-hearing documents from the state of Massachusetts against Purdue Pharma, name eight members of the Sackler family as defendants, Ars Technica reports. The filings accuse those Sacklers of “directing deceptive sales and marketing practices deep within Purdue,” leading to payouts of billions of dollars for the family alone.

The papers allege that in 1997, OxyContin inventor Robert Kaiko wrote to then-senior vice president of Purdue, Richard Sackler, voicing his concern that OxyContin would be marketed as an uncontrolled drug. “If OxyContin is uncontrolled…it is highly likely that it will eventually be abused,” Kaiko told Sackler, according to the filing.

“How substantially would it improve your sales?” Richard Sackler allegedly responded.

Goldin’s group printed this exchange on the faux-prescription slips. As they drifted down the airy, Frank Lloyd Wright-designed rotunda, they came to land on the prone bodies of 10 protesters, who lay among prescription bottles marked “Prescribed to you by the Sackler Family. OxyContin. Extremely addictive. will kill… . Rx# 400,000 dead…side-effect: death,” Gessen reports. Just down the hall from the Guggenheim’s Sackler Education Center, crimson banners dropped, reading “400,000 dead,” and “Take down their name.”

In 2017 alone, over 47,000 people died of opioid overdoses, which is six times the number of US soldiers who have died in Iraq and Afghanistan since September 11, the Council for Foreign relations reports. After Purdue pleaded guilty to lying about the drug’s real effects in 2007, a host of other suits have claimed that Purdue Pharma bares direct responsibility for the opioid epidemic. No members of the Sackler family were named in the 2007 suit. Reporting by outlets like The New York Times and CNBC left out the family’s name.

The State of Massachusetts, Ars Technica reports, brings new evidence to implicate the family. Waging a deceptive campaign for the drug starting at its release in 1996, Purdue made billions on the medication, which is an opioid agonist. Since the year after the drug’s debut, over 400,000 people have died of opioid overdose in the US, according to the CDC. Half of those deaths occurred in connection to opioid prescriptions.

“Even as the amount of opioids prescribed and sold for pain has increased, the amount of pain that Americans report has not similarly changed,” the CDC report found.

“Oxy money is in the halls! Throw them out if you have the balls!” protesters chanted on Saturday, according to Gessen. The well-healed protest group marched on to The Met, where the Sackler Wing holds the museum’s prized Temple of Dendur. “Sacklers lie, people die!” protesters wailed, as police tried to chivy them from the 5th Avenue street onto the sidewalk in front of the museum.

Goldin, whose own photography has been shown in the Guggenheim and the Museum of Modern Art, among other major art institutions, is, herself, a recovering OxyContin addict. The Saturday protest follows several others by Goldin and PAIN — in March 2018, Goldin led the first major protest against the Sacklers, that time in the Met, just outside the Temple of Dendur. Goldin is committed to “target[ing] the Sacklers through their philanthropy,” she wrote for Time last February.