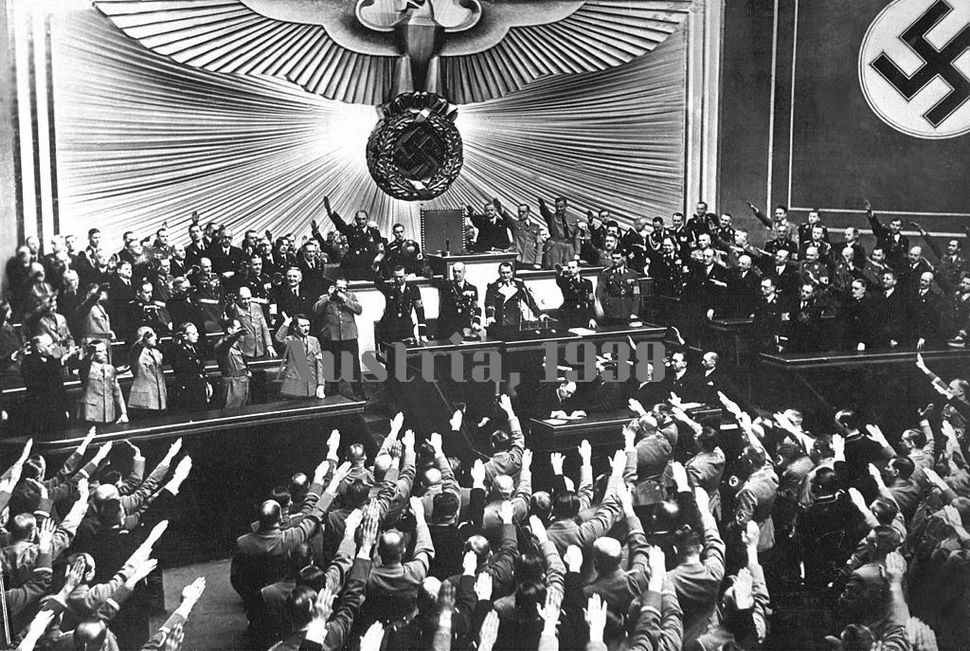 Adolf Hitler announces the annexation of Austria, in 1938 Image by Getty Images

How do you solve a problem like Austrians — whose country largely supported merging with Hitler’s Germany — forgetting the facts of the Holocaust?

Most of us can name at least a few of Fraulein Maria’s favorite things (silver white ponies, crisp apple strudels, and so on). Fewer can define the word “Anschluss” — the name of the March 1938 incorporation of Austria into Hitler’s Germany.

Despite the rosy impression given by the seminal movie musical “The Sound Of Music,” the majority of Austrians supported the Anschluss, welcoming Hitler’s regime into their country and daily lives. According to a new survey by the Conference of Jewish Material Claims Against Germany, more than half of the Austrians surveyed were unable to recollect that six million Jews were killed during the Holocaust. A quarter of those surveyed believed that one million or fewer Jews were murdered. But figures rose with younger Austrians.

Eighty-six percent of the 1,000 surveyed Austrians did not know that Adolf Eichmann was Austrian. Eichmann, who was one of the key actors in bringing about the Final Solution, was also personally responsible for ridding Austria of its Jews.

Far right nationalism has been on the rise in Austria as in much of Europe — Austria’s far-right Freedom party (FPÖ) gained a foothold in 2013 and is thought to be a potential force in the upcoming elections. Last month, the deputy leader of Austria’s current Conservative government, Heinz-Christian Strache, endorsed the far-right notion of resisting “population replacement” to describe his party’s mission, even as interviewers pointed out that the term is beloved with the extreme right. “We don’t want to become a minority in our own country,” he said, according to the Guardian.

The modern reprise of Austrian nationalism and a struggle between civilians to respond to it was evident in responses to the survey. A substantial number of respondents — thirty-eight percent — believe that Nazism could come to power again, and thirty-six percent believe there are a “great deal” or “many” neo-Nazis in Austria. Twenty-seven percent believe that Jewish people could face mass genocide again.

A more cheering eighty-two percent said that Austrians should learn about the Holocaust in school. Probably best not to start with “The Sound Of Music.”