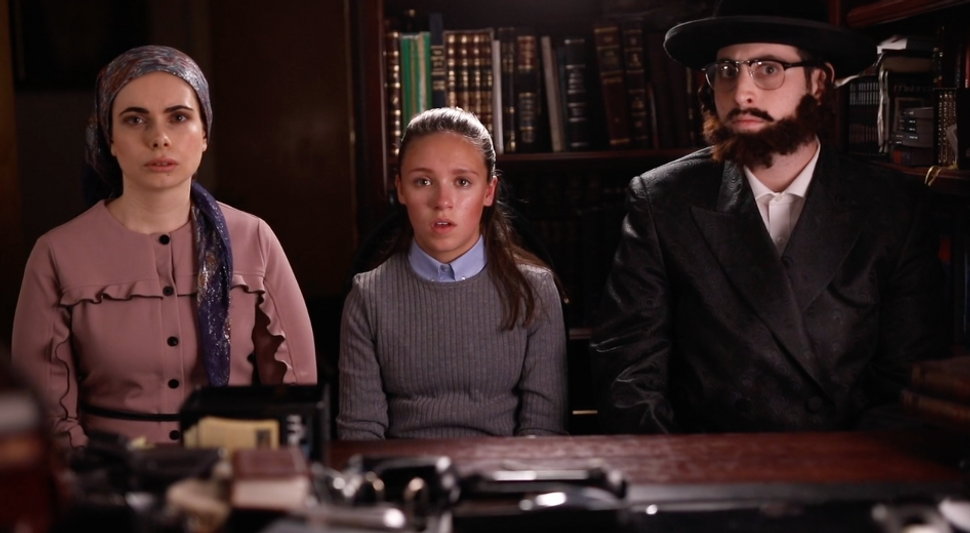 A still from the video by Amudim Image by Amudim

Amudim, the Orthodox Jewish organization that supports Orthodox youth in crisis, just released a powerful video campaign about sexual abuse, produced by Yeeshai Gross — and it’s required viewing for anyone affiliated with just about any faith community.

A mother, father and teenage daughter sit facing an authority figure — a principal, a rabbi, an educator — having a conversation that happens in every community. In each scene, the family is played by the same actors, but each time dressed differently, shuffling identities that we Jews so love to differentiate ourselves between, as Hasidic, as modern Orthodox, as yeshivish, as Masorti. Headscarf or sheitel or bare head, black hat or velvet yarmulke or knitted kippah — it’s all the same when it comes to abuse:

“This sort of thing doesn’t happen by us. Not in our community.”

“I’ve known him for fifteen years, and he would never do that.”

“If he’s been with us for so many years — why only now did this come up?

“He has a family! Children to marry off!”

“He’s done so much good. This can ruin his life.”

“We don’t air our dirty laundry.”

The look of betrayal on the young girl’s face, the parents’ horrors at witnessing their child being dismissed, the principal’s head shaking — these scenes are far from fiction. They are lifted directly from real life. Anyone who has interacted with abuse victims in a religious community has heard these phrases before, time and time again.

Ask anyone in our community who has been in the unfortunate — yet necessary — position of having to inquire about an abuser, in order to report the crime. The responses are identical, predictable almost: “But his family! But his organization! What he’s done for our people! How dare you!” Listening to a person virulently defend an alleged perpetrator’s Importance In Our Community causes a sense of vertigo. In the back of one’s mind, images flash from the private testimonies that victims have painstakingly divulged: A locked door, an unwanted hand, a lifted skirt, a hand on the mouth.

There is something particularly brave about Amudim’s depiction of these behind-closed-doors conversations. Perhaps because instead of yet another op-ed or tweet calling for reforms, Amudim harnesses the power of art, a tool too rarely used in the Orthodox community to drive change. The choice to portray these secret conversations with little commentary — simply as if we are sitting right there, in those rabbinic offices — is brilliant. Let us hope that this wakes our community up, and most importantly, that the victims among us feel seen.

Abuse happens, and it certainly happens in our communities. But it thrives the most, as this organization bravely points out, when we refuse to acknowledge it.