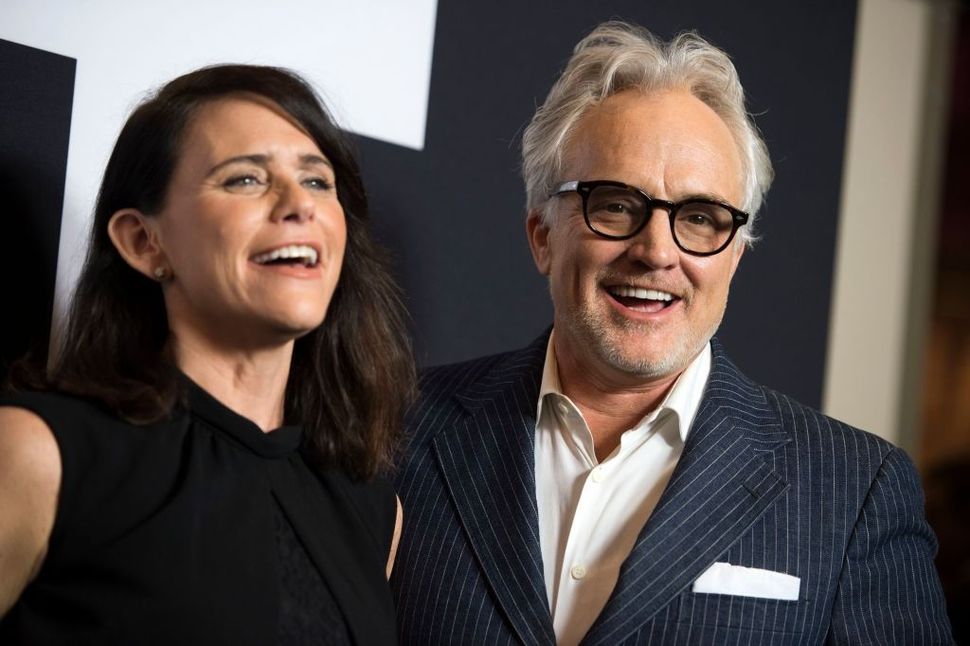 [Cue nostalgic piano remixed with crashing drums and the sound of patriotism:] Amy Landecker and Bradley Whitford were married this week.

She stars as Sarah Pfefferman on the Jewier-than-Jewish Amazon show “Transparent;” he had a guest-arc on the show in flashback sequences as her father’s friend, Marcy Hirschfeld. He stars as Commander Joseph Lawrence on “The Handmaid’s Tale;” she appeared on the show as Mrs. McKenzie.

He raised our adrenaline when he strategized as the beating Jewish heart of “The West Wing,” but she cemented her Jewish star in the Hollywood Yiddishkeit walk of fame when her character dated Larry David and Rosie O’Donnell at the very same time on “Curb Your Enthusiasm.”

He played Andy Samberg’s dad. She played Louis C.K.’s mom. He did comedy on “The Sarah Silverman Program.” She did comedy in the Coen Brothers’ “A Serious Man.” Naturally, they’ve both done their time on “Law & Order.”

In a shocking, totally unearned plot twist, Commander Lawrence married Mrs. McKenzie today in Santa Barbara. The shark may have been jumped, but the couple is thrilled. pic.twitter.com/iPZtzCGbob

In the TV show crossover event of the century, the two actors eloped in Santa Barbara on July 17. Landecker, 49, and Whitford, 59, who have entertained us for decades, are now officially charged with entertaining one another. The couple met in 2014 on the set of “Transparent” — so kudos and possibly a good spot in heaven for the show’s creator, Jill Soloway. Landecker says she tells Soloway, “You gave me the best role of my life and you gave me the best boyfriend of my life.” The two actors started dating in 2015, and Whitford announced their engagement in 2018 on Marc Maron’s podcast.

“I knew Bradley for a year before we dated and I kind of thought that he seemed like a cocky actor boy and I wasn’t really that interested,” Landecker told People magazine in 2016. “Now I’m the happiest I’ve ever been.” Whitford and Landecker each have a single earlier marriage; Whitford has three children from his marriage and Landecker has one.

At the elopement, documented by Whitford on social media, the bride wore periwinkle and accessorized with a bouquet of white roses and the couple’s dog. The groom wore a navy suit, and led a matching dog.

A million mazels to the happy couple. Let us pray for many years of their health and happiness, and a strong character arc on “The Marvelous Mrs. Maisel” for both.