Watch Ariana Grande And Barbra Streisand Belt Their Hearts Out 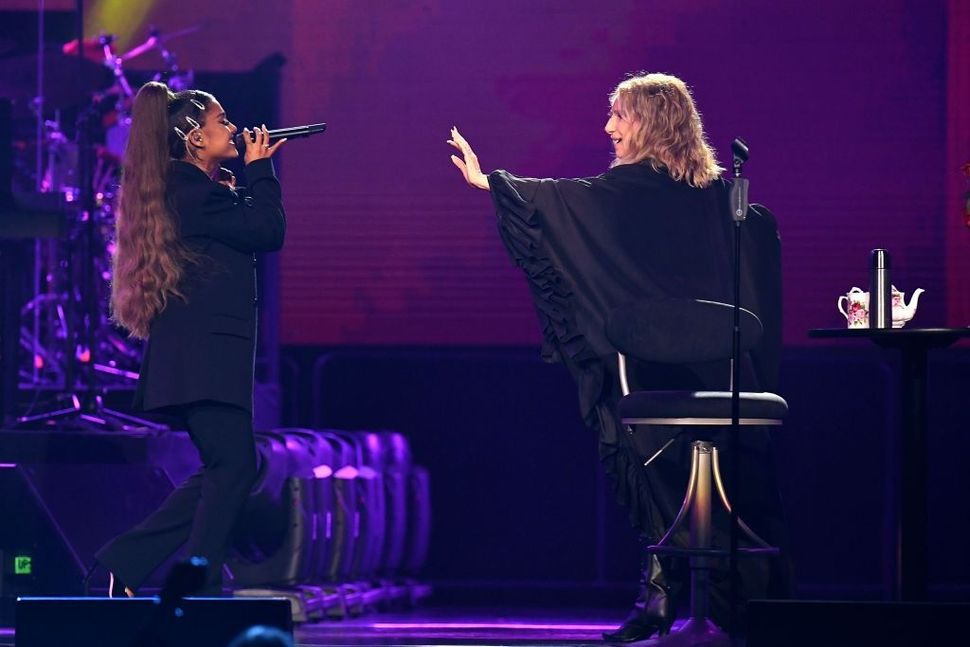 Like the moon and the sun, the boundless sky and the deep blue sea, like a shimmering blonde blowout and a gigantic ponytail, Barbra Streisand and Ariana Grande, two queens of entertainment, have met at last.

The 77 year-old Jewish singer and cultural icon performed at Chicago’s United Center on Tuesday night, a one-night-only spectacular featuring chintzy robes and a voice like the feeling of when you stick your finger in a fountain.

In a surprise moment at Streisand’s packed concert, sylph-like pop superstar Ariana Grande appeared on stage in a Streisand-style drapey black suit and what appeared to be an entire horse’s tail stapled to her head.

As the crowd roared, the women showcased their tremendous vocal virtuosity on Streisand’s 1979 hit “No More Tears (Enough is Enough).” The disco-hit was originally a duet between Streisand and Donna Summer, but the lyrics — “I’ve always dreamed I found the perfect lover/But he turned out to be like every other man” — will be familiar to fans of Grande’s latest album, which references each of her ex-boyfriends by name. Grande even has a hit called “No Tears Left To Cry.”

The 26-year-old — who is not Jewish, but started as a performer on the Bar and Bat Mitzvah circuit — revealed her fandom for Babs, the diva on whose shoulders Grande certainly perches. “Shaking and crying,” Grande tweeted, just after getting offstage. “Cherishing this moment forever,” she added later, sharing a picture of herself and Streisand, probably laughing at how bad other people are at singing.

Streisand is the only artist ever to win Oscar, Tony, Emmy, Grammy, Directors Guild, Golden Globe, and the National Medal of Arts awards, and to be honored by France’s Legion d’Honneur, Kennedy Center Honor, and the Presidential Medal of Freedom. Ariana Grande has topped charts, pushed conversations about the evolving definition of feminism, become the most-followed woman on Instagram, and brought back the kippah clip.

Next time, make the duet Grande’s hit, “God Is A Woman.” When all is said and done by Babs and Ari, trust us — you’ll believe God is a woman.

Watch Ariana Grande And Barbra Streisand Belt Their Hearts Out