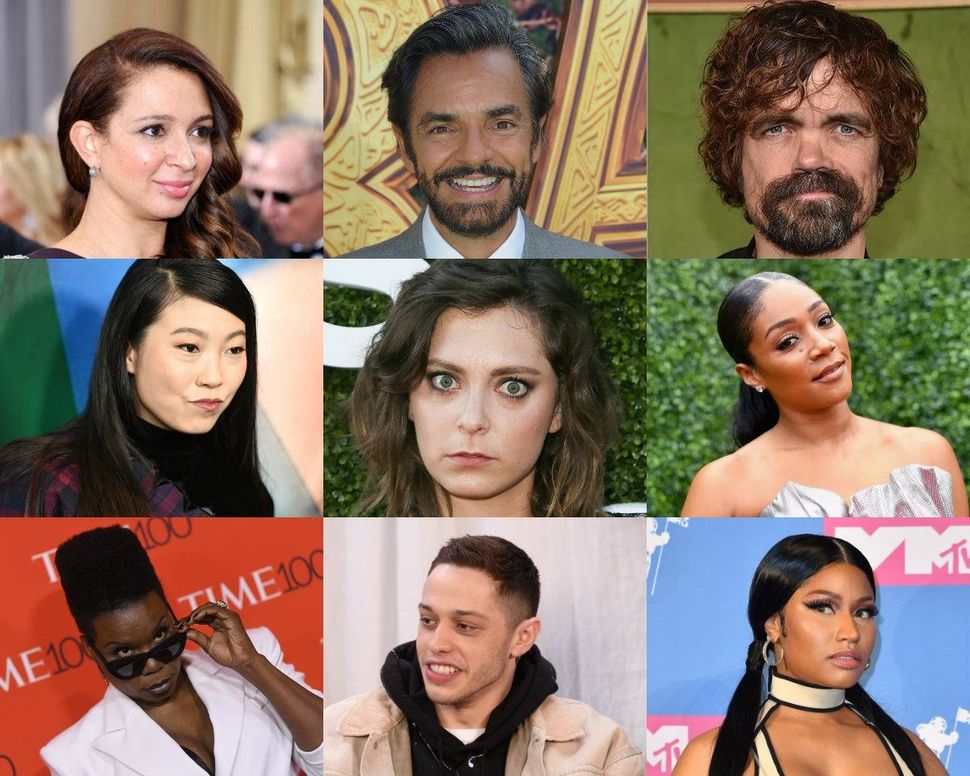 There is a time in a reporter’s life when she has to stand up and tell the truth. Even if the truth is unpopular. Even if it’s weird, and upsetting, and makes people say, “Didn’t this newspaper used to be about socialism?”

That time is now and the truth is this: The “Angry Birds Movie 2” cast is more stacked with comedic talent than any cast of “Saturday Night Live,” past or present. It is the full list of every person you ever wished might host the Oscars, plus ones you wouldn’t dare to dream of. It is four entire Super Bowl commercial years’ worth of star power. If Groucho Marx, Joan Rivers and Johnny Carson were alive today, they’d be on the phones with their agents right now, hissing “Why didn’t you get me seen for the bird movie?!”

Here is a smattering of stars who voice characters in the “Angry Birds” sequel, a movie based on a cellphone game about birds who are angry:

We feel forced to give voice to the obvious, though unsavory, question: Did the producer of “Angry Birds Movie 2” have blackmail material on every bankable-but-relatable actor in Hollywood?

This character is voiced by Angela Bassett, for all we know (we have not seen ‘The Angry Birds Movie 2’)

It is a truth universally acknowledged (by people who have thought about it for a few seconds) that celebrities like doing animated children’s movies, probably because it’s well-paid work that you can do in sweatpants, and it puts a smile on your kid’s face. Sure, we’re accustomed to Tom Hanks starring in “Toy Story” and it made sense to hear Beyonce’s golden voice in “The Lion King.” But come on. The list of “Angry Birds” actors does not stop:

“Hmm,” you might say. “I don’t know about that second list.” Well, pop-culture B-students, time to learn! That list includes Latin America’s most beloved actor, a “Stranger Things” kid, this generation’s Justin Bieber and the “Miranda Sings” girl. “Seems more random than anything,” you might insist, in spite of the mounting evidence that “Angry Birds Movie 2” will be this generation’s “It’s a Mad Mad Mad Mad World.”

Doubters, let me hit you with this:

Gal Gadot’s daughter is in this movie. That’s right, seven-year-old Israeli “Wonder Woman” progeny Alma Varsano voices Sam-Sam, a baby bird. Viola Davis’ daughter is here, too. So are Nicole Kidman and Keith Urban’s two kids. The creators of “The Angry Birds Movie 2” have pied piper-ed an entire generation of celebrity offspring and convinced them to pretend to be birds! What is going on here?

And there’s more. “The Angry Birds Movie 2” is getting exceptional reviews. In spite of themselves, critics at every major publication have gingerly confessed that they kind of loved this movie, which, to remind you, is a sequel based on a cellphone game about bird-and-pig turf wars.

We are either living during a massive conspiracy to promote the “Angry Birds” sequel, or else there’s just a really great, star-strewn movie about a bird-pig war. And at risk of stirring the pot of steaming enmity against powerful Jews that threatens to boil over every day of our gosh darn lives, it’s worth noting that the movie’s three writers — Peter Ackerman of “Ice Age,” and Eyal Podel and Jonathon E. Stewart — are Jewish. Good job, Jews! You wear Alfred Hitchcock’s pissed-off bird mantle well.

Between these three “birds” are: a Tony nomination, 174 episodes of “Saturday Night Live,” and whatever Danny McBride has done

Also Jewish is the movie’s one listed producer, John Cohen. Cohen, who has produced similar movies, including the “Despicable Me” franchise, doesn’t have so much as a Wikipedia page.

John, please just let your favorite Jewish publication know — how did you do it? How did you get this cast, these writers and these reluctant reviewers to make bird emotions interesting to the general public? The first “Angry Birds” movie, produced by Cohen in 2016, also had a cast list that read like a Hollywood Walk of Fame who’s-who: Sean Penn, Keegan-Michael Key, Kate McKinnon, Hannibal Buress, Billy Eichner, Danielle Brooks, Blake Shelton and Alex Borstein. Alex Borstein! From ‘Maisel’!

Please, just take a moment and imagine making a movie based off a feuding bird game so successful that when the sequel comes along you have to say “Sorry Sean Penn, the cast list is full. We’d love to have you back for “The Candy Crush Movie 4’ in 2036.”

Hats off to “The Angry Birds Movie 2.” May you be the subject of many more conspiracies, unwillingly complimentary reviews and tweets by Gal Gadot.