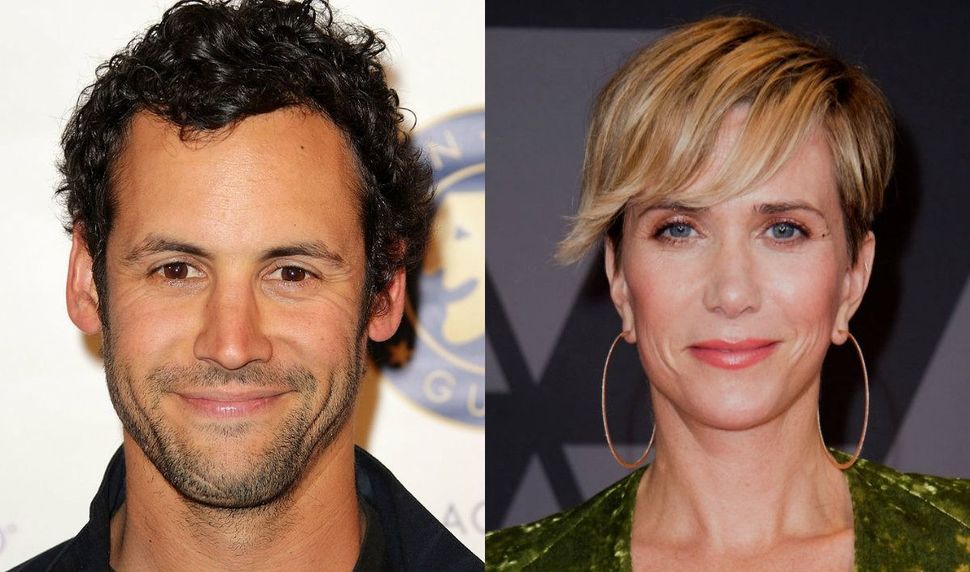 Kristen Wiig, very famous bridesmaid, will soon be a bride.

Wiig is engaged to one Avi Rothman, per multiple news reports on Friday.

At the Forward, Dr. Brown’s Cel-Ray soda streamed out our ears, and the magen david chains tightened around our neck. For, nu — Avi Rothman is Jewish.

Queen of comedy, “Saturday Night Live” legend and excellent bangs-stylist Kristen Wiig is set to marry Rothman, leaving American Jews wondering — where have we been on this issue? Our Kristen is going to marry a guy whose name is so overtly Ashkenazi it’s basically Moses ben Knishes, and we have zero intel on him?

Pop a sugar cube between your teeth, cause here comes the tea:

Rothman and Wiig have been dating for at least three years — their relationship was revealed as suddenly as that of two high school students who go from being strangers to lying flat on a cafeteria table, making out. In May 2016, paparazzi captured the couple kissing vigorously on a Hawaii beach, grabbing each other’s tukhises as if for balance. People Magazine reported a claim at the time that the couple had been “secretly dating for a few months.”

Wiig is 45. Rothman’s age is unknown. So is almost everything else about him — he’s not a high profile person, and despite his deliciously Camp Ramah-style name, no Jewish geography has yet unearthed his roots. He’s not famous, which brings us, unfortunately, to our next point:

Rothman is an actor, and not a terribly successful one. He trained in the same prestigious improv theater, The Groundlings, where Wiig got her start. But his IMDB is full of projects that you just know you don’t need to cry over having missed, like a TV movie called “A Mother’s Rage.” However, Rothman has the unique distinction of having played both a rabbi (in a 2012 TV show called “Co-op of the Damned”) and also Jesus (in a TV movie called “Modern Day Jesus.”) To Rothman’s credit, he has created a considerable amount of his own work, including multiple TV movies and shorts.

Other publications are calling Rothman Wiig’s “longtime boyfriend,” stating that they’ve dated since 2016. I will not do that, as I have used tissues under my bed that are older than their relationship. This will be a first time under a chuppah but a second wedding for Wiig, who was married from 2005 to 2009 to Hayes Hargrove, another actor whose IMDB page is speckled with roles like “salesman,” “clerk” and “disgruntled jogger.” In between she dated Strokes drummer Fabrizio Moretti for 18 months. They broke up in 2013.

We wish Avi and Kristen joy, pride and good health. May her comedy gain positive influence from a lifelong legal bind to the Jewish people. May he continue to demonstrate on an increasingly public stage that white guys with curly hair can be masculine.