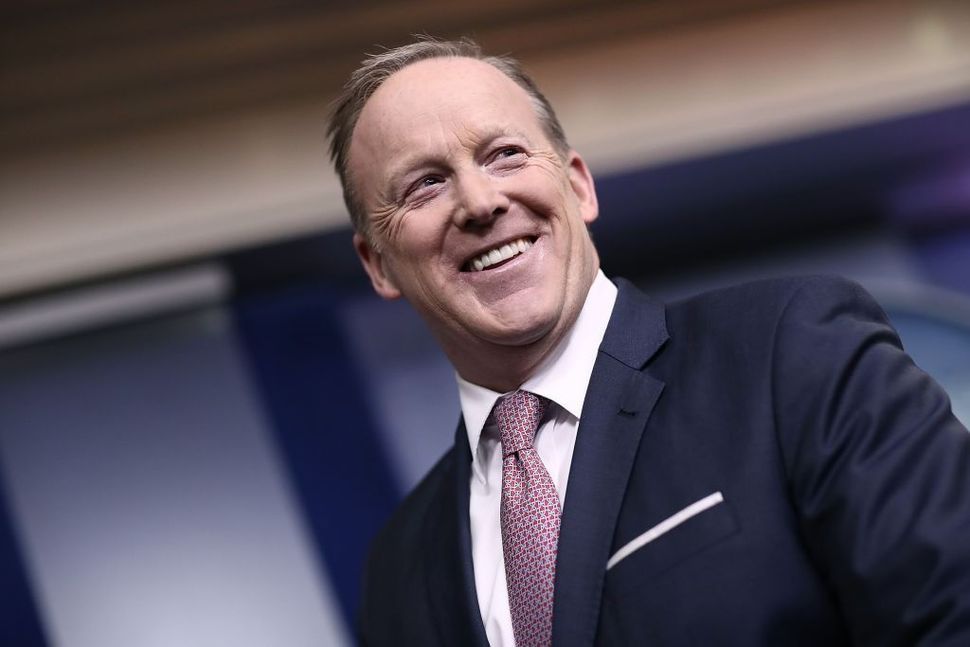 Sean Spicer, the former White House Press Secretary, will perform on ‘Dancing With The Stars’ Image by Getty Images

Samba! Jive! Tango! Diminishing the murder of millions in the Holocaust!

Former Press Secretary Sean Spicer has signed on to show off his moves on an upcoming season of “Dancing With The Stars” on ABC.

Spicer, who served as communications director of the Republican National Committee prior to assuming his post in the Trump administration, will appear on the 28th season of the popular reality TV show that pairs C-list stars with professional dancers. Other high-profile cast members will include “Queer Eye” star Karamo Brown, supermodel Christie Brinkley, NBA star Lamar Odom and recent ABC “Bachelorette” Hannah Brown.

But Spicer has an edge: He’s the only contestant who has stood before the American people and either forgot that Hitler gassed people to death, or lied about it.

Spicer’s career has spiraled since he stepped down in July 2017 from his White House role — in which he made a name for himself as an early adherent to the trend of attacks on the press. Aside from his famous denial that Hitler gassed his people, Spicer’s time in the administration is remembered for the numerous false claims he made about the size of the crowd that gathered for the President’s inauguration.

Attempts to rehabilitate his public persona via an appearance at the Emmy Awards and on morning shows were met with cynicism. His book “The Briefing” was not a success, despite offering the colorful description of the president as “a unicorn, riding a unicorn over a rainbow.”

What, are we being too harsh? Like we’re beating a dead (but not gassed!) horse? “Dancing” may seem like a gutter that erstwhile notables thrash around in before being swept out to sea, but it’s not. As James Poniewozik pointed out in The New York Times, Rick Perry did a stint on the show after his time as Texas governor and his failed run for president, but before accepting a cabinet position in the Trump administration. You might find spangles and choreography humiliating, but Americans love reality razzle-dazzle.

Sean Spicer on reality TV is less “Dancing With The Stars” and more Panic! At the Disco. It’s an unnerving reality of the American politics: Even if a person is a certifiable buffoon, that doesn’t mean he isn’t dangerous.