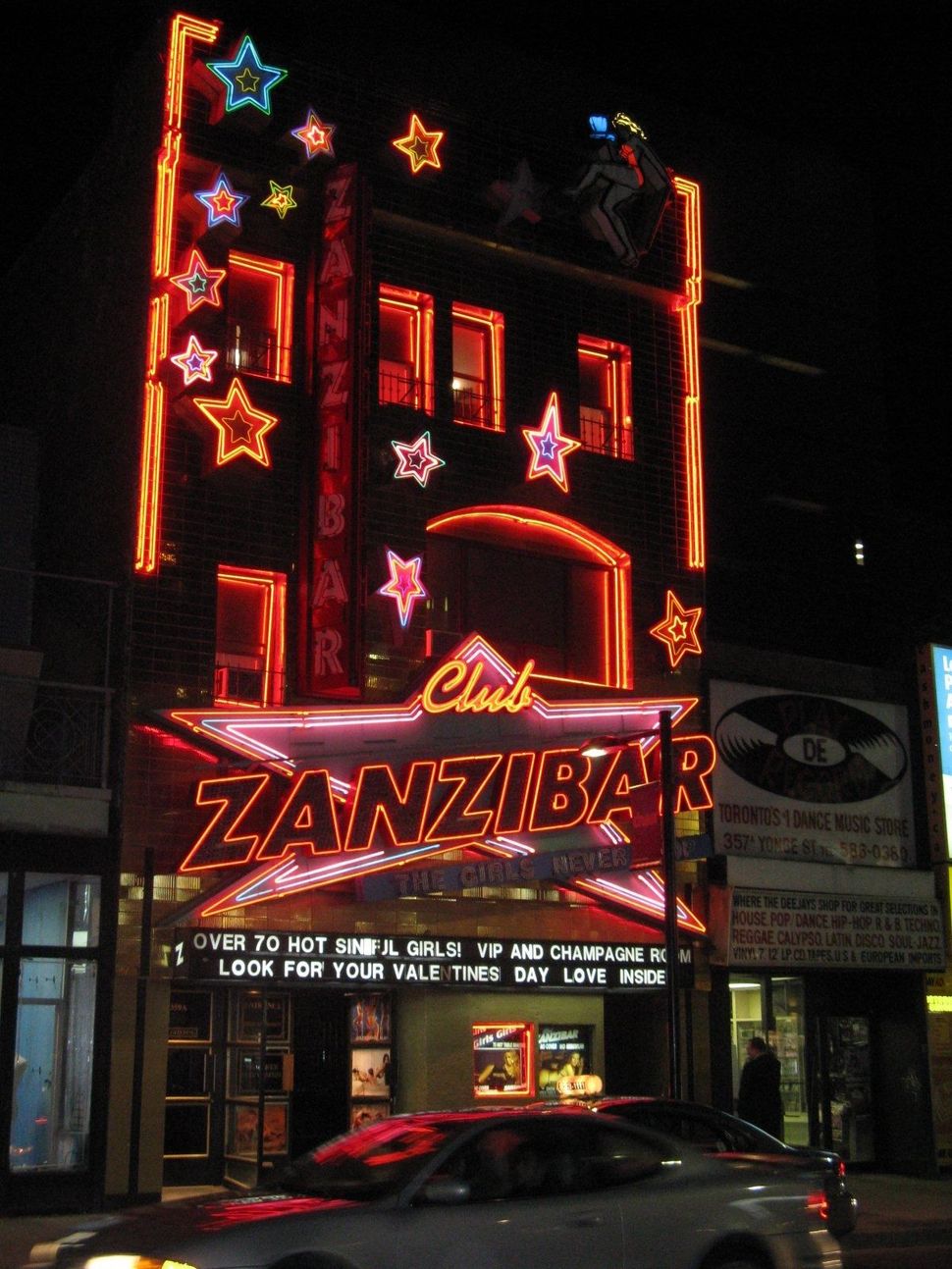 That’s the backstory of one of Toronto’s most colorful characters, who died this week at 84.

But David Cooper, who owned the legendary Zanzibar strip club on Toronto’s bustling Yonge Street, was also a hugely successful real-estate mogul — and “the best zaidy you could have”, granddaughter Nicole Cooper told the Forward the day after the family wrapped up shiva. “Zanzibar kind of blocks people from seeing all the magnificent things he’s done,” she said. “He was someone to idolize.”

According to the Toronto Star, which ran a lengthy obituary last week, Cooper grew up in Kensington Market, then the center of Jewish Toronto. More a hustler than a scholar, he opened a small shop at age 18. Cooper met his future wife, Annette, at a dance at Toronto’s Jewish Y. “Annette came from an Orthodox family, and there was some concern about whether her family would accept the match,” the Star wrote.

“My grandfather was more the gangsta type,” said Nicole Cooper, 25, an aspiring musician and music-producer, explaining that she meant “super cool.”

“My grandmother was the daughter of a very famous rabbi, and was extremely religious,” Cooper added. “When she married my zaidy, my bubby kept everything kosher. She still does today. They loved each other so much, she allowed him to live how he needed to. And he always respected her.”

Both David Cooper and his wife, Annette, worked to build an “empire” of Toronto real estate, Nicole Cooper said. The Coopers were prescient; Toronto’s real-estate market has been one of the world’s hottest for several years.

David Cooper opened the Zanzibar Tavern in 1959. At the time, he tried to explain his “crazy idea” to an out-of-town cousin, according to the Star obit. As one of his grandchildren told the Star, “There’s no word in Yiddish for burlesque,” so Cooper’s cousin believed Zanzibar was a “ballet bar.”

In fact, Zanzibar showcased live music at its inception, before evolving into today’s stripper-spotlighting Club Zanzibar. And along with the Brass Rail a few blocks north – founded by Cooper’s brother, Irving – it remains a lone holdout of Yonge Street’s more colorful past.

While the religious and secular sides of the family co-existed peacefully for decades, David Cooper ended up in a legal conflict with his own brother over the sale of another family-owned bar. “But they made up,” Nicole Cooper said. “By the end of their lives, they reconciled.”

What was it like growing up in a family best known for a club whose signs include “Nude Women Non-Stop”?

“To be honest, it’s something we all embraced from a young age. It was almost funny to us,” Cooper said. “It desensitized us toward certain things. My little cousins would run around in Zanzibar T-shirts, screaming ‘boobies!’.”

But her family ties also brought baggage, Cooper said. “Feminists don’t like it. People would treat you a certain way once it came up.” she said. “At the private Jewish school we attended, a teacher made comments about Zanzibar in front of the whole class because my sister was there. Every time I had a relationship with a guy, even a friendship, everything was normal until Zanzibar came up.”

Cooper herself worked at Zanzibar as a waitress – “I made great money, and it was fun. But you can’t be waitress in a strip club your whole life.”

Some of her panache might come from her grandfather, a canny showman who spent $300,000 on a Zanzibar facelift in 2001, covering the front of his building with tiles glazed in 10-karat gold, and an “expanse of neon that flashes day and night,” the Toronto Star wrote at the time.

When David Cooper died Aug. 22, his son considered closing the bar, the Star reported, but decided to honor his father on the marquee instead. “ENJOY NON STOP SEXY DANCERS,” the sign read.

And underneath: “DAVEY C OUR FOUNDER REST IN PEACE.”