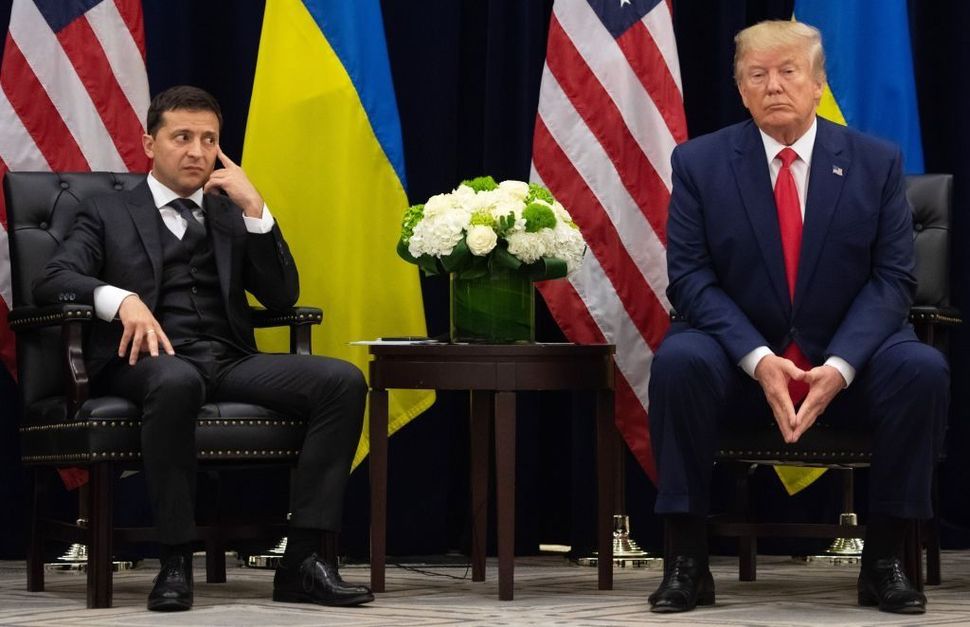 Like every person with a mezuzah and a trachea, I believe that I speak for the Jews.

And this is what I must say: a hot, confused Ukrainian man has become the linchpin in the Trump impeachment proceedings, and that man is a Jew. President Volodymyr Zelensky, whose profile I would swipe right on if I saw it on Tinder, is Jewish. He doesn’t talk about it much, and his name makes him sound like someone who would have kicked your great-grandmother during a pogrom, but this 5’7” human “Black Mirror” episode is Jewish.

Hello? Anti-Semites? Philo-Semites? People who buy the myth that Jews get eight presents on Hanukkah? (Come on guys, it’s always, like, one big gift and a couple of books.) Where you at? This very, very public-facing man is Jewish. And you can watch 10 hours of him doing comedy on Netflix. He is Ukraine’s combination Jerry Seinfeld and Phoebe Waller-Bridge.

Zelensky is a 41-year-old actor and producer who created a TV show about a high school history teacher who accidentally goes viral with a political rant, then becomes President through a write-in campaign. In real life Zelensky, who had zero political experience, created a political party named after the fictional one on his show.

In between shooting the second and third seasons of his show, he won the real-life election. “If I could just have one week in office, if at all possible, I would f*****g show them,” his character had railed. “Have a simple teacher live like a president, and a president live like a teacher.” Zelensky’s TV-based political rise is perhaps the only one to give President Trump’s a run for his money. Taking office, he assigned members of his longtime comedy team powerful government positions. Politico called him “probably the least prepared individual to head a democracy in world history.”

Then, in July, President Trump asked this charmingly bug-eyed man to investigate Hunter Biden, son of potential 2020 Democratic nominee Joe Biden, according to a memo released by the White House. Now the House is beginning impeachment proceedings against Trump. The two men met last week at the United Nations, and their conversation looked like a shot-by-shot remake of a YouTube compilation of awkward moments from “Curb Your Enthusiasm.”

That man trying to follow social cues to avoid alienating the most powerful man in the world and imperiling his country? He’s the star of “Love In The Big City” (and its sequels, “Love In the Big City 2,” and, if you’ll believe it, “Love In The Big City 3”). They’re comedies about men who are obsessed with sex who are pulled toward domesticity by sorcery. (Yes, really!)

It’s truly a wild time to be a Jew in America. We have a bigger platform than ever before, but we’re eerily aware of how precarious our safety may be. And doesn’t it just tickle you to think that the man who found himself at the UN, telling reporters, “I don’t want to be involved with democratic…uh…elections of the USA” probably shares cultural experiences with you, like hamentaschen and fear of genocide?

Usually, Jews and people who hate Jews are aligned in the desire to point out when a famous person is Jewish — powerful and polarizing Jewish men most of all. Nobody seems exactly in the dark about the religious background of Jared Kushner or Mark Zuckerberg or George Soros. So where’s that famous American Jew-dar now, when a Jewish man with a hilarious backstory accidentally stumbles into what is looking like one of the biggest scandals in history?

You may hate Zelensky for potentially threatening Trump’s presidency. You may love him for it. But let’s see some acknowledgment from the greater populace. Frankly, it feels like Jesus all over again. (He’s ours! We made him! Praise us!)

Zelensky is just like you and me — he’s the leader of a country of over 40 million people, he’s the axis on which the future of American democracy sits, and he’s a little awkward. And we say to him the same thing we will say to our children, and our children’s children, we must say: Hey, don’t forget! You’re one of us.

Anyway, here is Ukrainian President Volodymyr Zelensky playing the piano with his genitals: