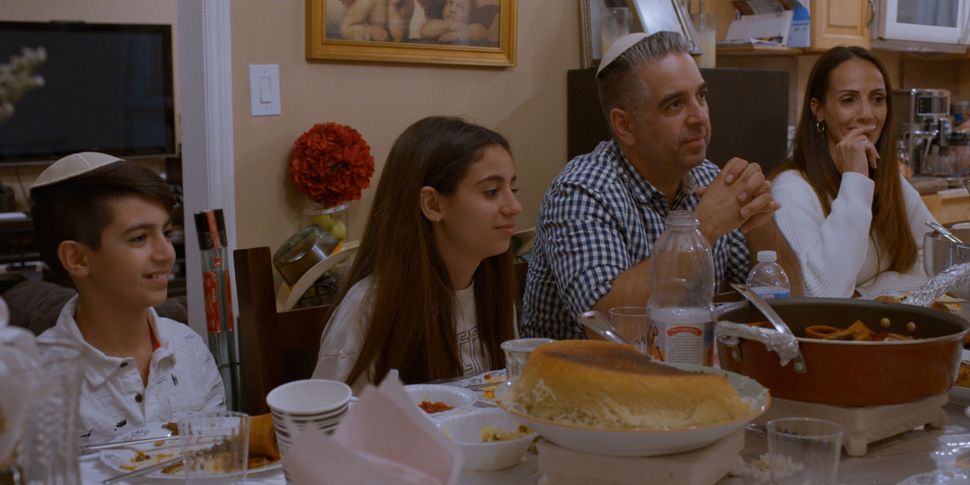 Bar, center, with her parents and brother, on ‘Living Undocumented’ Image by Courtesy of Netflix

Seventeen years old, with flat-ironed hair and carefully distressed jeans, Bar seems like she’d be perfectly at home at any American high school. She likes celebrating Shabbat with her parents and younger siblings, but she’s also impatient to become an “independent person.”

But this seemingly ordinary case of adolescent angst is complicated by her family’s uncertain immigration status. Bar’s family shared their story in “Living Undocumented,” a six-part Netflix documentary on undocumented immigrants that premiered this week. Directed by Aaron Saidman and Anna Chai, the series profiles eight families, who hail from Honduras, Mexico, Colombia, Laos, Israel, and Mauritania. Narratives overlap as the new Americans navigate legal battles, part from and reunite with beloved relatives, and simply brave the challenges of daily life without a passport.

The series is noteworthy for capturing aspects of the immigration process that are often inscrutable, like nighttime deportations. Chai told Vulture she hopes filming something “so fantastical” to the general public will make “people think [about] if there are things we can do to make this process better.”

It’s also unusual — certainly during the crisis at the southern border — to profile a family like Bar’s. They face a situation far less drastic than those of some other participating families, who are refugees who fled gang violence or crushing poverty in their home countries. Her parents, Ron and Karen, immigrated from Israel to California in 2001 when Bar was just six months old. Unable to gain legal status after their tourist visas expired, Ron and Karen simply stayed put and hoped for the best. Seventeen years later, Ron owns a branding and packaging company, and an American flag waves outside his Los Angeles bungalow. But when Ron’s mother is diagnosed with pancreatic cancer, he can’t return to Israel to be with her. Instead, he watches her funeral on DVD.

Through Bar’s family, the filmmakers ask viewers to consider immigrants who — like many of our own relatives and ancestors — made America their home despite having other feasible options. Describing a moment of panic when a house party is busted by the police, Bar says her friends criticized her for “overreacting,” not understanding that she could “ruin everything my parents worked for.”

The series offers no manufactured feeling of hope, but moments of success in the long trek towards citizenship stand out. Gaining DACA status and a social security number, Bar can finally apply for jobs. She tears up when she performs what for most Americans is a mundane task: filling out a W-4 form.

Irene Connelly is an intern at the Forward.