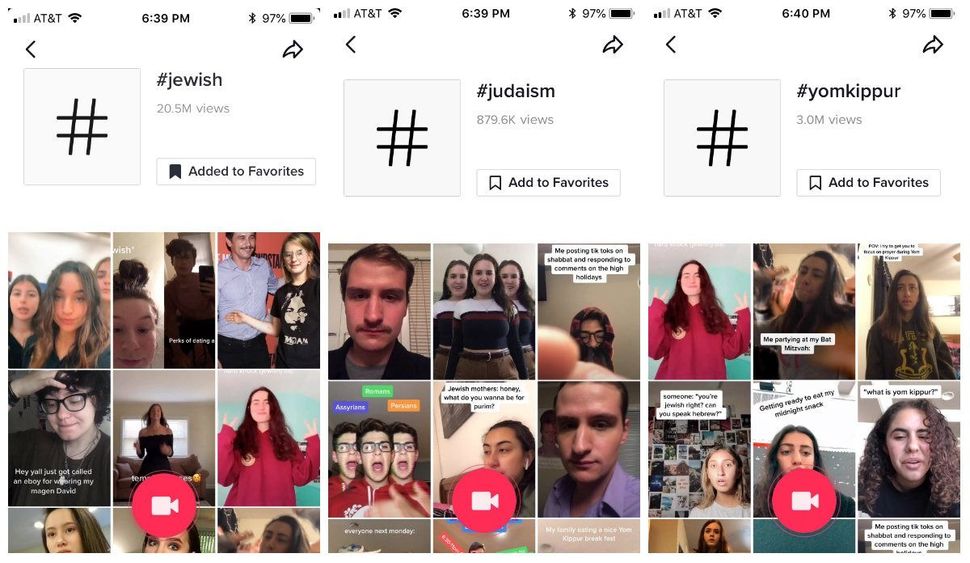 It took me just five minutes of TikTok streaming to come upon a video of a teenager dressed as “Harry Potter” spinoff character Newt Scamander doing American Sign Language over a recording of comedian John Mulaney riffing on Jewish women.

Further down the page — an eye-rolling girl gave a tour of her parents’ mezuza collection, a boy in a hoodie reenacted the ancient conquests of Jerusalem with reality TV dialogue, and a girl and her mom bickered over an Israeli soap opera they call “Schnitzel.”

TikTok — the viral video app for teens that has been downloaded over one billion times — is an accelerated, exaggerated version of the rest of the internet. Accordingly, it is as warm and inviting a host for white supremacy as a shower curtain is for mold. You don’t have to search #heil to find the hate (but you can.) Calls for genocide are scattered in between dance challenges. Mostly, there’s the teen proclivity to despise seriousness, mixed with latent cultural anti-Semitism that gives much of the internet its distinct flavor.

But elsewhere on the explosively popular app, Jewish ritual, culture, and people are in good, though often prepubescent, hands. Sure, the hashtag “Anne Frank” has more views than the hashtag “Jewish.” But plenty of young Jews are using TikTok to connect with other diaspora Jews, to serve as ambassadors for their people, to explain themselves to themselves.

If you don’t know TikTok, congratulations — you’ve got one foot in the grave. TikTok was launched in 2017 under the name Musical.ly, then bought in 2018 by the Chinese company ByteDance — last week Reuters reported that the US Committee on Foreign Investment is investigating ByteDance for potential censorship and misuse of user data. This feels unlikely to put a dent in TikTok’s popularity.

The app helps users produce snippets of viral content — popular TikTok genres are choreographed dances, lip-syncs to random cultural touchstones, memes, and challenges: for example. It’s a kind of teen-friendly Reddit that you can mainline, a Never-Neverland for people born after 9/11. Can Jews find a home on TikTok? They have, and it’s weird.

I took to my TikTok research with the same blind determination of a dad interrogating his teenage kids about whether they do the new drug he heard about on NPR. TikTok isn’t built for people who lived during the Clinton administration; the search bar couldn’t identify the tag for “Jewish” even though I could see it was a tag on many videos — I don’t know if that’s because of a sinister TikTok conspiracy or because I’m incompetent. 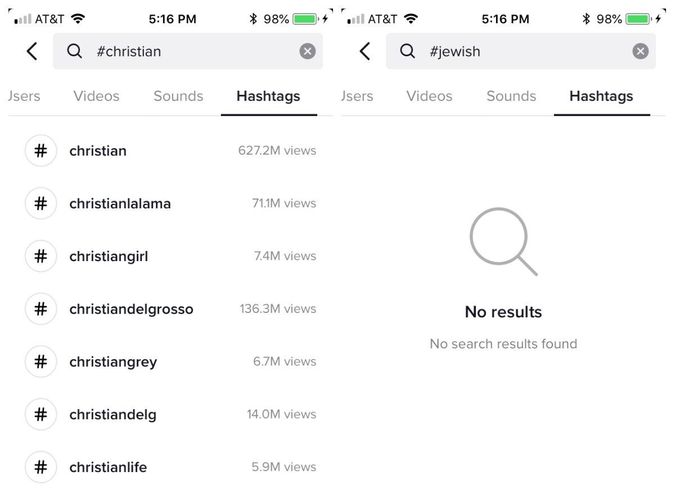 I seared my eyeballs in their own socket juices by the blue light of my smartphone, attempting to watch as many #Jewish and #Judaism TikTok videos as possible. The videos were laugh-out-loud funny, offensive, troubling, self-hating, and self-loving. Let’s break down Jewish TikTok into the most popular categories and types of videos so we can understand them, even if it makes us seem unbelievably old.

This is the state of Jewish TikTok:

The most common Jewish TikTok genre calls for a “Jewish check.” This is a riff on other popular “check” videos — “Strict Parent Checks” film nanny cams and lists of rules, while “Rich Boy Checks” show off expensive Apple products and sports cars. Most “Jewish check” videos go like this one made by user “Sooopphhhhh,” which has over 120,000 views — Hava Nagilah plays as the camera pans to kippot and an array of the latest iPhones. It moves to a boy’s profile, zooming in on his nose. Then to a mezuzah, girls doing a Hora, and a chai necklace.

Shana Cohen’s version features a boy showing off a handful of splayed twenty dollar bills — but also, a girl putting money into a tzedakah box, and a pair of teens studying Talmud. In many “Jewish check” videos, like the one with over 118,000 views made by students at Jack M. Barrack Hebrew Academy in Pennsylvania, the camera zooms in on one teenager’s nose, which is stroked for emphasis. It’s hard not to imagine how that selection process goes.

Cleanse your pallet after the stress of watching Jewish teenagers accept Nazi standards of beauty with this format, which is straightforward praise of famous Jews. “Have all my celebrity crushes been Jewish THIS WHOLE TIME” one user commented on the worshipful video above. (Yes, Jacky, they have.) Most of these videos are about male heart throbs; in others Jewish women get well-deserved praise, too.

Yom Kippur and Rosh Hashanah are incredibly fecund times for TikTok teens, presumably because they are locked together in Jewish spaces for many hours at a time, with access to great props (say, antelope horns.) Witness: A graphic song about STD symptoms becomes the scaffolding for a parody of High Holiday prayer services. Just outside of the sanctuary, two girls dance to a live cantor’s rendition of “Kol Nidre,” filtering through the door. A particularly young-looking TikToker does a darkly comic bit about fasting on Yom Kippur while in recovery from an eating disorder. (“not Jewish but a friend of mine is and theyve always said if yr chronically ill its a mitzvah to not fast?” one user commented.) Later in the season, a boy gave a dressing-down to his etrog.

The “We’re the Jews” meme format is based on “We’re the girls,” in which three girls march in a circle, chanting “We’re the girls” in between uttering embarrassing truths about themselves. “The past three consecutive years on the High Holidays, my rabbi has made a sermon about The Beatles,” says TikTok user “Binch.Boi,” above, barely containing her mirth. “If I get a tattoo I won’t be buried with the rest of my family!” exclaims a middle school-aged girl in Noah Shapiro’s “We’re the Jews” video.

“I just took a DNA test, turns out, I’m 100 percent that b***h,” Lizzo sings in her chart topper “Truth Hurts.” In Lin Manuel Miranda’s Pulitzer Prize-winning musical “In The Heights,” a teen girl sings, “My mom is Dominican-Cuban/My dad is from Chile and P.R. which means/I’m Chile-Dominicurican/But I always say I’m from Queens!” Teens used these snatches from both songs to riff on their heritage, including Jews, who found themselves to be “100% Ashkenazi,” “100% Persian,” and observed “I look like Anne Frank.” One Reform teen’s version goes, “My mom is…ethnically Jewish/My dad is…the child of two Holocaust survivors/Which means I’m…a miracle not to have a mental illness yet/But I always say…I’m in denial.”

References to the Holocaust are abundant on TikTok, and Jewish TikTok is not an exception. Comedy — and in pursuit of it, risk taking — is the currency of TikTok. Nothing’s off limits, including the Holocaust, plenty of Jews on the app argue, with a caveat from some: The people joking about the Holocaust should be Jewish. TikTok offers a venue for teens to rant and rave about being different, and learning about World War II and the Holocaust makes Jewish kids feel different, as expressed in video after video after video.

‘I can’t wait for Christmas’

If much of Jewish TikTok is a confused, defiant blend of joy and shame around being Jewish, all of that goes away during Hanukkah. Come Kislev, Jewish TikTok-ers ditch the nose-themed videos and focus on uproarious celebrations of Hanukkah, with surprisingly little Christmas-envy.

And finally, the Jewish dorks:

Standing alone in his bedroom, a teenager dances to a remix of a pop song to demonstrate that there is no good reason to be anti-Semitic. A girl in a headscarf lip-syncs to rap in homage to the Jews who were blamed for the Black Death (“The f**k goin’ on?” she asks, giving voice to the Medieval Jews.) “OyGay,” a trans teen TikTok-er who makes Jewish content, lip-sync-raps to Killumantii, imitating the manic, furious God of the Torah.

Plenty of these micro-videographers and part-time comics are the only Jews at their school, the only Jews in their neighborhood, the only Jews they know. But on TikTok — busting Jewish stereotypes, comparing noses, dirty dancing to the sounds of Shacharit — they’re not alone.