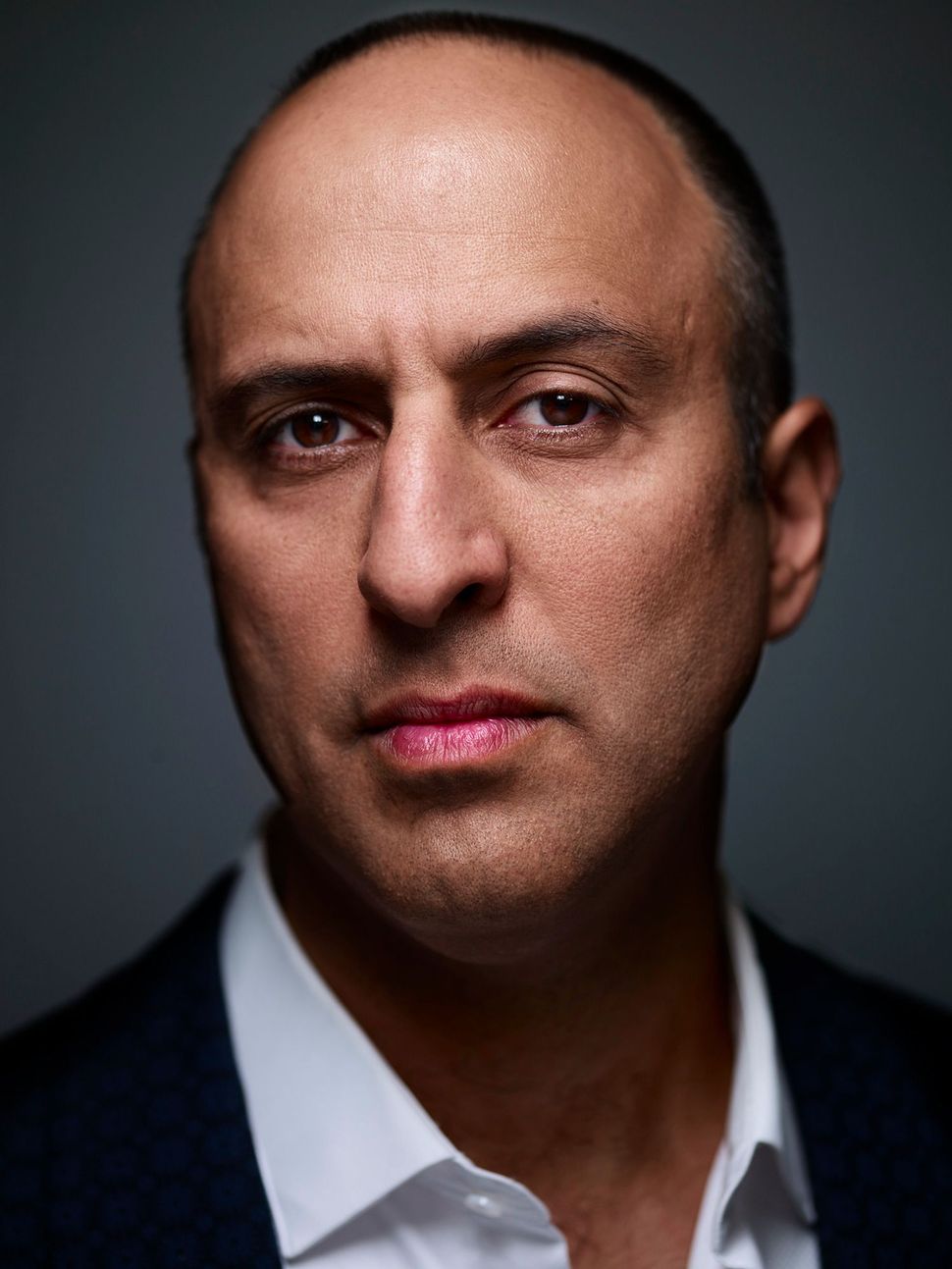 Ethan Herschenfeld is so accustomed to playing Jewish tough guys that when he recorded his first comedy album, he named it “Thug Thug Jew”.

Now he’s cutting a much menschier figure in the Jewish cinematic event of the spring: a new adaptation of Philip Roth’s “The Plot Against America,” a speculative novel about what might have happened had the xenophobic and anti-Semitic right-wing aviator Charles Lindbergh become President on the eve of World War II. Herschenfeld’s character, Rabbi Joachim Prinz, was a real-life figure in the Reform movement who fled Nazi Germany and later became a civil rights activist in America.

The Forward’s Irene Katz Connelly spoke with Herschenfeld about period television, beard conundrums, and bringing Yiddish to the silver screen. The following interview has been condensed and edited for clarity.

Long before you even auditioned for “The Plot Against America,” you had a chance encounter with Philip Roth. Tell me about that.

I ran into him at the Barnes and Noble on 82nd and Broadway. I was trying to tell him that I wrote a college essay about him, but I was a little tongue-tied because of course he’s a literary hero. He was so relaxed. He told me, “It’s O.K., just talk to me.” My grandfather lived in Elizabeth [near Roth’s birthplace, Newark] so there’s some overlap — at least in the cemeteries where our families are buried.

What was it like being on the set for the show?

It was an incredible experience. My scenes are with Zoe Kazan and John Turturro and Winona Ryder, three incredible actors. I got to work one-on-one with Turturro, because he plays a southern rabbi and I play a German expat one, and we had to rehearse and do multiple takes saying a prayer together.

#FBF to on set with @winonaryderofficial for “The Plot Against America” for @hbo.

And what role does your character play in the drama?

So I play Rabbi Prinz, who is a historical figure and a counterbalancing force to Rabbi Bengelsdorf [John Turturro’s character]. The big dramatic moment I really enjoyed is during our scene when I address Bengelsdorf, in a subtle but firm way, about the choices he’s making as a religious leader in a time when fascism is taking over. Bengelsdorf is a character who — gosh, I hate to say it, but a character like Stephen Miller or Jared Kushner, people who are cozying up to a racist and a facist while cloaking themselves in a tallis or the Israeli flag. And Prinz is very opposed to that.

Of course, “The Plot Against America” was published in 2004, but many people have pointed out the parallels between Roth’s imagined America and today’s Trump era. Do you think this adaptation is taking those similarities into account?

Roth actually asked this question, just before he passed away — and he said he wasn’t interested in prognosticating. But obviously it’s extremely timely right now, the connections are undeniable and I’d say explicit and warranted. This is one of those moments where a piece of art could wake someone up — although we’re also living in a time when people are so dead set in their opinions it hard to imagine them changing because of a film. Especially because the use of Hitler as an analogy is so overdone. You go to any country where there is political strife and people are calling each other Nazis.

How did you prepare for the role?

This was the first time I was playing a real character in the modern age, and I could see what he said and how he sounded. He actually spoke on the National Mall right before Martin Luther King — you can see on YouTube. He said that the real danger isn’t the maniacs committing violence but the people on the sidelines. Of course, he said it much more eloquently than that. But it’s an extremely powerful message.

Speaking of historical accuracy, another funny thing happened. Rabbi Prinz, because he was Reform, was clean-shaven. But while I was shooting The Plot Against America, I was also working on a Hulu show called “Castle Rock”, where I played a French settler who was supposed to have a big beard. We were negotiating about whether or not I could shave, but eventually I ended up keeping the beard, so for Rabbi Prinz there’s one small inauthentic detail. 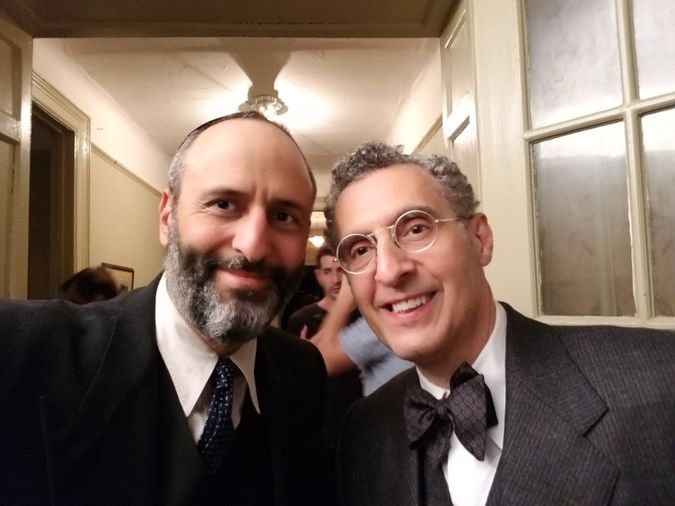 Herschenfeld on set and in costume with the show’s other rabbi, John Turturro. Image by Yoav Davis of Davis Media

They couldn’t just give you a fake beard?

I tried on a great beard in the hair and makeup trailer, but J.J. Abrams, who is in charge at Castle Rock, wanted nothing to do with fake beards. My agent and I were calling it “Beard-gate.”

In the Plot Against America, you have some lines in Yiddish. But this isn’t the first time that’s happened to you, is it?

No, it’s not. I’ve played a Jewish gangster on “Boardwalk Empire,” where there was a lot of Yiddish being bandied about, and I was an acid-dropping Hasidic teen in a 2010 film called “It’s Kind of a Funny Story.” I got to say something like, “I think Yussele took too much,” but in Yiddish. My grandfather helped me with my lines for that one — he grew up in Brownsville, which was essentially a shtetl at the time. He didn’t know there were any people in the world who were not Jewish until he was eight or nine.

Now I’m actually going to Los Angeles to shoot a show called “Angelyne,” where I’ll play a Yiddish-speaking refugee. A friend who’s a Yiddish professor is coaching me, and he pointed out that I have to change my vowels to sound more authentic. My grandfather came from Kiev, but the dialect for this show is closer to Satmar Yiddish.

That’s pretty dedicated, given that so few viewers will be able to tell the difference.

Maybe just three or four people, but I think it’s fun to be accurate with things like that.

In your acting career, you’ve had a lot of Jewish roles. Is that something you seek out?

Definitely not. It just happens to me. Actually, the title of my new stand-up album is Thug Thug Jew, because I often end up playing tough Jews, those are the roles people give me. But I will be voicing [Turkish president] Erdogan on Stephen Colbert’s “Our Cartoon President” — so there’s a thug who’s not Jewish.

It’s not something I seek out, but I don’t try to escape it either. I don’t know if I’m a “proud” Jew, because I take issue with the notion that you can be proud of something you had nothing to do with choosing. But it’s an integral part of my identity.

Irene Connelly writes about culture and lifestyle. You can contact her at connelly@forward.com.