Alison Roman and Chrissy Teigen are sparring on Twitter. Here’s what you need to know. 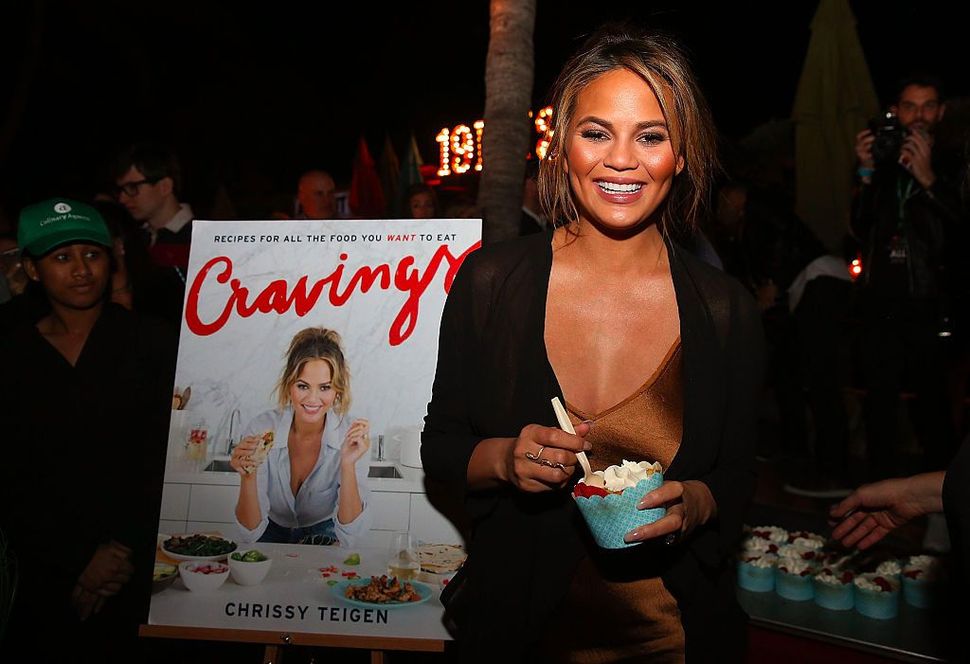 I’ll preface this article by mentioning that I do enjoy the stew.

You know what stew. It’s the stew that every millennial who owns a pot has cooked, the stew so Internet famous that if you Google the word “stew” the first result is the name of its creator, New York Times resident chef Alison Roman. Redolent of turmeric and coconut, the stew has made a previously verboten ingredient — kale — acceptable among the members of my quarantine pod (aka, my parents). I will be eternally grateful to her for that.

I’ve also devoured Roman’s homestyle cooking tutorials, in which the chef, who has written about connecting to her Jewish heritage through food, performs such feats as cooking Thanksgiving dinner in a small Brooklyn kitchen that’s just like my small Brooklyn kitchen, except that it’s bigger and nicer. And I enjoy flipping through her cookbooks, even if the dishes are much fancier than the title of her breakout tome, “Nothing Fancy,” lets on (every single one is caked in an herb I’ve never heard of). Even before coronavirus sent me home to New Jersey, my life as an aspiring yuppie was much less glamorous than Roman’s life as the empress of yuppies; but the chef’s allure lies in her ability to project authenticity just as she invites urban millennials into a version of young adulthood that’s cooler, more stylish, and better seasoned than our actual realities.

Last week, Roman caused another internet sensation — not with a second stew but through a controversial interview in The New Consumer during which she characterized model-cum-lifestyle-guru Chrissy Teigen and famously minimalist organizer Marie Kondo as sell-outs for using their celebrity cachet to launch homeware lines.

“Like, what Chrissy Teigen has done is so crazy to me. She had a successful cookbook. And then it was like: Boom, line at Target. Boom, now she has an Instagram page that has over a million followers where it’s just, like, people running a content farm for her,” Roman said in the May 7 interview, referencing Teigen’s cookbook, “Cravings,” and her enormously popular Instagram food account that goes by the same name.

Kondo responded with typical flair — by staying silent. Teigen tweeted that, as a longtime fan of Roman’s, the comments hurt: “This is a huge bummer and hit me hard,” she wrote on May 8. The Twitterverse, which sides with the famously quippy Teigen in all things, bombarded Roman with exasperated memes. Some argued that by taking aim at two women of Asian descent, rather than white women who market products aligned with their lifestyles, she was devaluing the work of women of color (Roman’s stew has previously been criticized for replicating curry-like flavors without acknowledging the non-European cultures that have honed such dishes long before she arrived on that scene). After an attempt to brush off criticism as “baby’s first Internet backlash”, Roman tweeted a public apology to Teigen the next day, doing all she could to put the episode to rest.

Hi @chrissyteigen! I sent an email but also wanted to say here that I’m genuinely sorry I caused you pain with what I said. I shouldn’t have used you /your business (or Marie’s!) as an example to show what I wanted for my own career- it was flippant, careless and I’m so sorry

But for many Roman fans, the episode might put a dent in the air of authenticity that aided her rise to fame. When Roman characterized Teigen’s food Instagram as a “content farm,” she meant that Teigen was using social media to monetize her image. But what public figure is not using social media to monetize their image? Besides promoting her cookbook and New York Times specials on Instagram, Roman regularly spotlights different brands: in a recent snapshot, she endorsed boutique grocery store Sahadi’s and tagged the designers behind every piece of clothing on her body. While she didn’t say if she was compensated for the mentions, she’s also posted explicitly sponsored content, such as advertisements for JCrew, on Instagram in the past.

Here I am photographed in The Before by @richterfit in my second home @sahadis for @fastcompany. FYI FWIW ICYMI Sahadi’s is still open, with in-person shopping at their Industry City location, pickups at both Atlantic ave/Industry City and delivery via @shopmercato. They are my favorite neighborhood family owned grocery store (with amazing prepared foods, too) and I love everyone who works there so much. It’s where I get all my nuts/seeds, cheese, olives and of course my sweet sweet labne. Support them if you can! Link to @fastcompany article by @yazzyg linked in profile (shirt @rachelcomey pants @levis groceries models own)

Roman puts her well-plated soups on Instagram because she’s a good cook who delights in food, but also because they’re a vehicle for lucrative advertisements and a tool that establishes her, through accumulated likes and follows, as a candidate to star in lucrative cooking shows. In a world where broadcasting one’s lifestyle on social media is the quickest route to influence and clout, it’s hard to blame Roman for doing this. But it’s absurd to pretend that she’s less engaged in the exercise of self-branding than anyone else.

In fact, just before dunking on Teigen’s Target line, Roman teased her own collaboration with the upscale cookware line Material: a forthcoming capsule collection modeled on cookware Roman has collected by browsing antique markets. Very Brooklyn, but also very pricey: no information about the collection exists now, but Material’s smallest and most boring knife retails at $50.

For the same amount of money, I could (and, after filing this article, probably will), purchase Teigen’s cast iron wok from Target. Enamelled in a shade of mint green that mimics the Le Creuset color palette, it looks more expensive than it is and will allow me to pretend that I’m not quarantining in my childhood home but cooking trendy dishes for a posse of artistic friends whom I can safely see in person.

Alison Roman and Chrissy Teigen are sparring on Twitter. Here’s what you need to know.