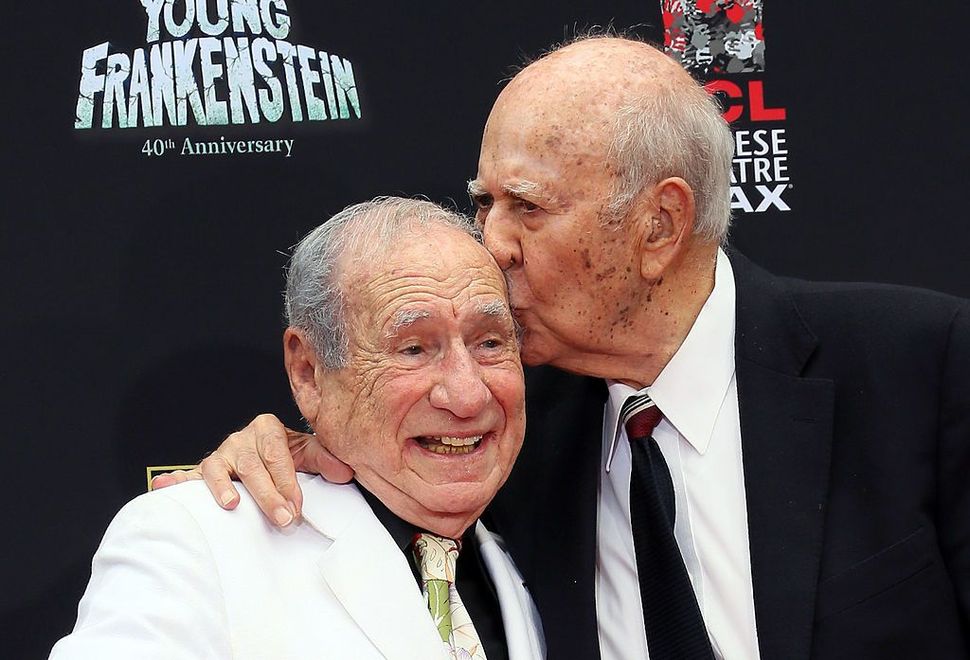 Reiner with his longtime friend and partner-in-comedy, Mel Brooks. Image by Getty

On June 29, comedic legend Carl Reiner passed away at the age of 98.

The Bronx-born son of Jewish immigrants, Reiner served in the military during WWII and embarked on a long and storied comic career in the postwar era. With fellow jokester Mel Brooks, he formed one half of a hit comedy duo; he also created “The Dick van Dyke Show,” winning five Emmys for his work. In his later years, Reiner wrote novels and cultivated an outspoken political voice: in recent weeks he expressed support for the Black Lives Matter movement, and in some of his last tweets he mourned the election of President Trump. He also emerged as an avuncular and generally menschy figure, known for sharing dinner with Brooks every night during their old age.

It’s no surprise that social media is filled with tributes to Reiner’s artistic legacy, sharp wit and kind heart. Here’s how fellow comedians, entertainers and admirers are remembering him.

So sad to hear about @carlreiner Not only did he make my favorite TV& movies (see:Where’s Poppa) but his humanity was beyond compare. His heart was so full of love. Never left his house empty handed- book, space pen, Swiss Army knife. RIP to a man that embodies the word mensch pic.twitter.com/mazBmwznkX

CNN host Jake Tapper posted a picture of Reiner in uniform, presumably dating from his military service during WWII.

RIP to one of the greats, Carl Reiner. https://t.co/EM1RvuZwuW pic.twitter.com/kjIya6qpAY

Writer and producer David Simon said he was honored to have once been the butt of a Carl Reiner joke.

Already, I am upset to be living in a world without Carl Reiner and I only know the man his public work and essence. But I have one small remembrance of a random encounter that makes me laugh and I’m gonna share: Long time ago I was a newspaper reporter and I had the chance…

Actor Josh Gad said the news made an already difficult year even worse.

As if 2020 weren’t cruel enough. Goodbye to one of the greatest comedic minds of all time. Thank you for always making us laugh and for always giving us joy. My deepest condolences go out to the entire Reiner family. RIP #CarlReiner pic.twitter.com/IeJ3RkG2vS

Journalist Dan Rather, one of Reiner’s contemporaries, described the comedian’s life as “a roadmap through American culture.”

I am deeply saddened to hear of the passing of show business legend Carl Reiner. An innovator, entertainer and beloved icon, his nearly century of life was like a roadmap through American culture. His wit and courage never left him. My heartfelt condolences to his family.

Carl Reiner’s last tweet – sent the day he died – is a reflection of his spirit and the indefatigable patriotism of a World War II veteran. https://t.co/WMrbbHsBOp

Actor Max Brooks, the son of Reiner’s longtime partner-in-comedy Mel Brooks, said the news was “a loss for me, a loss for my family, a loss for all of us.”

I’ve known Carl Reiner my whole life and I can’t imagine a world without him. A loss for me, a loss for my family, a loss for all of us.

Senate Majority Leader Chuck Schumer paid tribute to the comedian, who was one of his constituents.

Honoring the hilarious life of Carl Reiner, Bronx born and raised, he played the Broadway stage and helped make New Rochelle famous as the home of Rob and Laura Petrie. He was one of the true legends of American comedy.https://t.co/eJbz71dDmI

Carl Reiner was comedy genius. Often that genius made other funny people even funnier. But give him a stage and he could spin laughter out of any moment. I watched him do it time and again. His contributions to comedy are eternal. And a lovely man, as well. #ripCarlReiner

Carl Reiner was a truly great man. Brilliant and inspired as a creative, which thankfully we all got to enjoy, and clearly also just a good person. Deepest condolences to one of the gifts he gave us: @robreiner, his wonderful wife Michele and their entire family. https://t.co/XRZYC2TXFY

The great #CarlReiner has gone to that Show of Shows in the sky. I worked with him, loved him, and consider myself one of the luckiest people in the world to have once attended lunch with his hilarious, guarrulous gang…

I’m so sorry to hear of Carl Reiner’s death. What a life!
I want to say how proud we are that he was featured, just six weeks ago, in our vote by mail ad. Carl won’t be there to vote safely in November, as he wished—but he’ll be with us in spirit.
May his memory be a blessing. pic.twitter.com/xRjw3WqpI4

Goodbye to my greatest mentor in movies and in life. Thank you, dear Carl. https://t.co/H7A4ZwIqfc