Is #JewishPrivilege a thing? Not so much, say Jews on Twitter 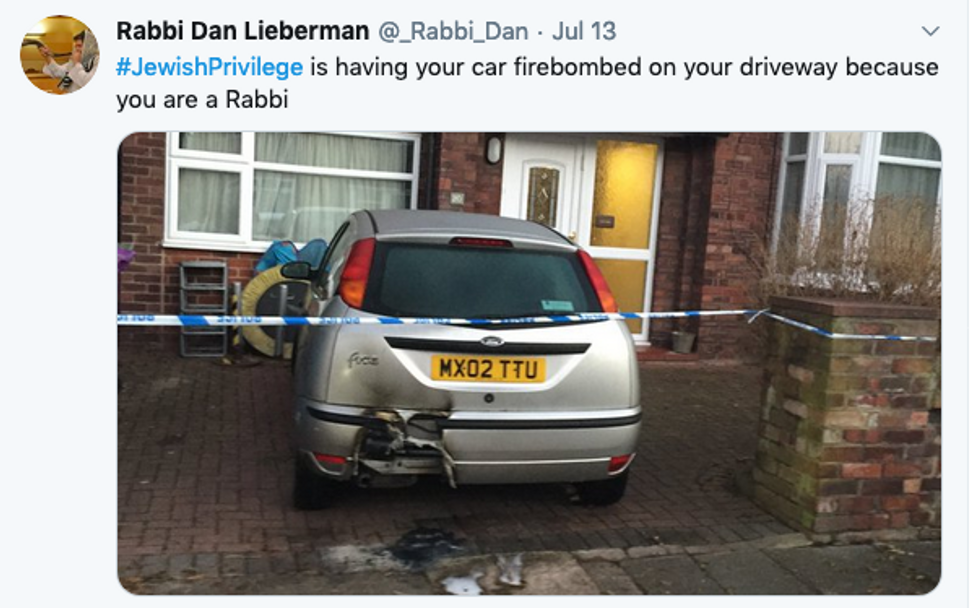 A rabbi shared a photo of his car after an anti-Semitic attack. Image by screenshot/Twitter

These are a few of the anecdotes Jews shared on Twitter after the hashtag #JewishPrivilege began trending over the weekend.

While the hashtag has existed for years, far-right anti-Semitic accounts resurfaced it on Sunday with posts denying the Holocaust, accusing Jews of masterminding the slave trade, and stating that they “shape shift to white” at whim.

But by Sunday afternoon, Jewish activists and celebrities had co-opted the hashtag, using it as an ironic appendage to keenly felt stories about personal experiences with anti-Semitism. Comedian Sarah Silverman led the charge with a post that recalled being pelted with pennies by classmates.

My dad getting the shit kicked out of him everyday at school 4 being a kike to kids in NH throwing pennies at me on the bus to pastors in Florida calling for my death and telling their congregation that knocking my teeth out and killing me would be God’s work. #JewishPrivilege

David Simon, the writer behind “The Wire” and “The Plot Against America,” also chimed in, recalling the emotional anguish he experienced when his father was taken hostage in the 1977 Hanafi Siege.

My #JewishPrivilege? Garden-variety stuff. Eleven dead relatives at Auschwitz and in the Russian woods and a father who was a hostage and suffered PTSD years after the Jewish non-profit where he worked was stormed by angry dudes with guns & scimitars who threatened to behead him.

Many others shared their families’ Holocaust history or instances of anti-Semitism they’d experienced in everyday American life.

#JewishPrivilege is when you go to Auschwitz and find out about all the cousins you could have had pic.twitter.com/c0f5rhOnVl

My parents telling me: “don’t tell your new coworkers you’re Jewish. Make up an excuse for Rosh/Yom when you have to take off.” #JewishPrivilege

#JewishPrivilege is having your car firebombed on your driveway because you are a Rabbi pic.twitter.com/ppZzuTfOtA

Others made a distinction between “Jewish privilege” conspiracy theories peddled by extremist groups and the white privilege from which many Jews benefit.

#JewishPrivilege? I’m a Jew with Jewish & Christian roots who benefits from white privilege. The difference between my Jewish side and Christian side is that I can trace my Christian ancestry back 400 years. My Jewish roots disappear in the late 1800s cause holocaust/pogroms/etc.

Meanwhile, some users pointed out how the experiences of Jews of color complicate any attempt to label Jews as “privileged.” Since Jews are far from a monolithic bloc, it’s impossible to generalize about the privilege we enjoy in some contexts or the discrimination we experience in others.

I have an immense amount of white privilege, yes. But Jews are not a monolithic group. When you label all Jews as privileged you are erasing Jews of Colour. Not to mention our shared history of oppression, genocide, and marginalization. #JewishPrivilege is painful. Please stop.

#JewishPrivilege isn’t real. Some Jews may avoid being “othered” ocassionally bc of their proximity to “whiteness” but that does not mean that at the end of the day when kippah and Torah are in tow they too won’t feel the ugliness of hatred. We’re better when we’re together.

Debate over Jewish privilege also made its way into the resignation of New York Times Opinion Columnist Bari Weiss.

As these things tend to do, there is now a debate over #JewishPrivelege and the Bari Weiss resignation letter. Outside of Tel Aviv, New York City is the most Jewish city in the world with ~13% of the city’s residents being Jewish. More than 2 million Jews live in NY state. pic.twitter.com/A1VMBDb3mk

_Irene Katz Connelly is an editorial fellow at the Forward. You can contact her at [email protected]_ 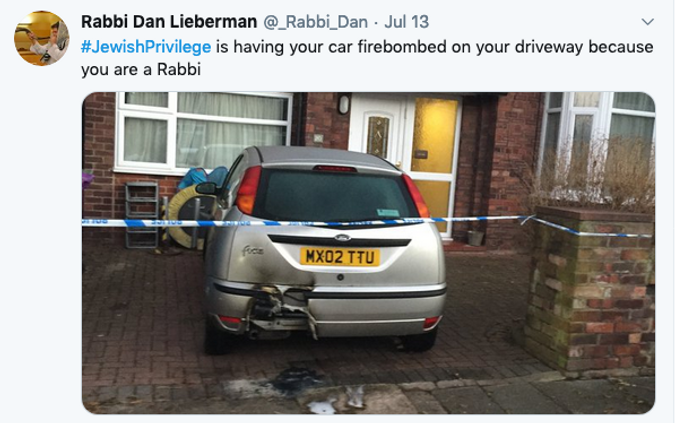 A rabbi shared a photo of his car after an anti-Semitic attack. Image by screenshot/Twitter

Is #JewishPrivilege a thing? Not so much, say Jews on Twitter