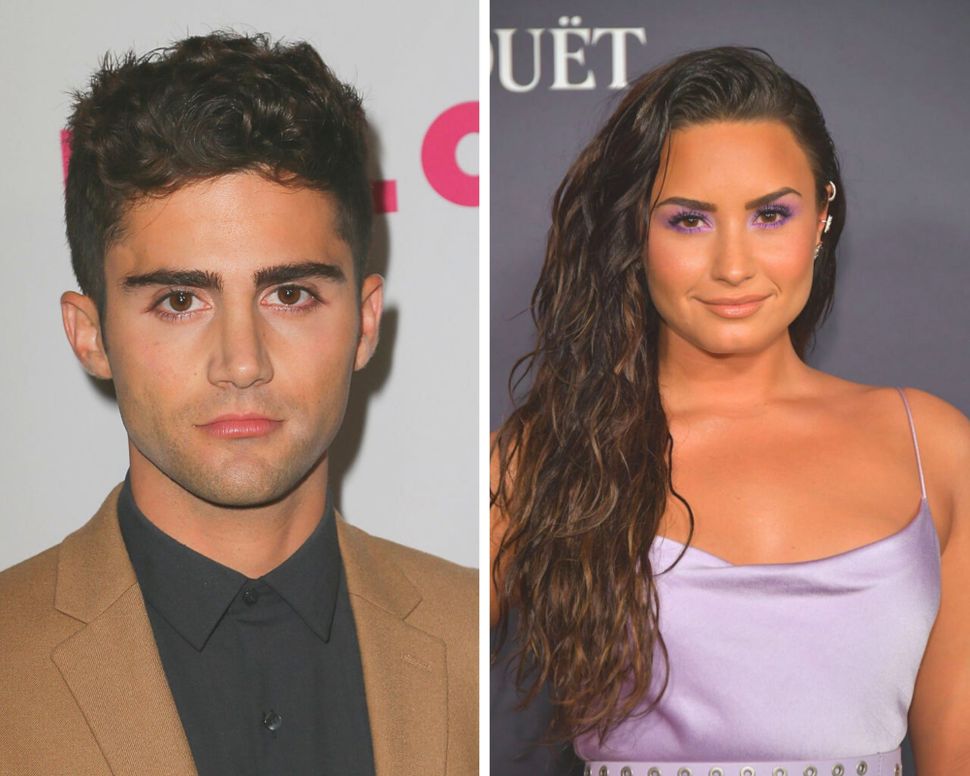 Lovato and Ehrich announced their engagement months after going public with their relationship. Image by Getty

In the time it took most of us to stop touching our faces in public, Demi Lovato has shacked up with a member of the tribe — and locked him down for life.

The songstress is engaged to Jewish actor Max Ehrich, less than four months after the two went public with their relationship.

When I was a little girl, my birth dad always called me his “little partner” – something that might’ve sounded strange without his southern cowboy like accent. To me it made perfect sense. And today that word makes perfect sense again but today I’m officially going to be someone else’s partner. @maxehrich – I knew I loved you the moment I met you. It was something I can’t describe to anyone who hasn’t experienced it firsthand but luckily you did too.. I’ve never felt so unconditionally loved by someone in my life (other than my parents) flaws and all. You never pressure me to be anything other than myself. And you make me want to be the best version of myself. I’m honored to accept your hand in marriage. I love you more than a caption could express but I’m ecstatic to start a family and life with you. I love you forever my baby. My partner. Here’s to our future!!!! ??❤️?? Ps. THANK YOU @angelokritikos FOR HIDING BEHIND ROCKS AND CAPTURING THE ENTIRE THING!!! I love you boo!!!

And for the next few days, both lovebirds were kind enough to satisfy the public’s appetite for even more engagement snaps. Over the weekend Lovato graced us with:

Best night of my life… still soaking it all up.. I love you baby @maxehrich ?

A song snippet she wrote about “the best night of my life” (pumped to hear this every day on the radio in six to eight months).

Feeling so grateful so I wrote something… (swipe left) ? ps. @maxehrich took this after telling me to close my eyes on the way to propose to me ?? Love you honey..

And this video of Ehrich making teen-hearthrob expressions that truly belongs in a Taylor Swift music video.

Magical moments captured by me ✨?? ?: The First Thing You See – Bruno Major

We’re all familiar with Demi Lovato, the erstwhile Disney star through whom a generation of girls vicariously enjoyed chaste summer camp kisses with Joe Jonas. But who exactly is Max Ehrich?

Turns out, he’s a New Jersey native with long roots in the state’s Jewish enclaves: one of his grandfathers attended Weequahic High School, the archetypically Jewish school that provided the grist for many a Philip Roth novel. Like Lovato, Ehrich entered the Disney orbit as a teenager, appearing as a backup dancer. “High School Musical 3.” Since then, he’s snagged four Daytime Emmy nominations for his work on the soap opera “The Young and the Restless.”

The first clues to the pair’s budding romance emerged just like their engagement: on social media. In March, Ehrich started posting pictures of cryptically romantic street art on Instagram, each of which Lovato instantly liked. Just a few weeks later, when the world started falling apart, they let us know they’d decided to take things to the next level: Ehrich posted a shirtless snap from Lovato’s Hollywood Hills house with the caption “when u realize u should’ve packed more for your quarantine stay.”

In the ensuing months, the online bread crumbs piled up: Lovato accidentally appeared in Ehrich’s Instagram Live. Ehrich posted many, many pictures with Lovato’s pups. The two appeared in Justin Bieber’s latest music video, “Stuck By You.” While Lovato was raised Christian, she announced in 2015 that genetic research revealed she was “a little bit Jewish” on her father’s side. For his part, Ehrich has described himself as a practicing Buddhist but also shares the love on Jewish holidays, tweeting to fans on Rosh Hashanah and Passover.

He also comes with that most Jewish of accessories, a lovable mom who aggressively kvells about all his Major Life Events.

Over the moon happy for Max and our future daughter Demi!May your lives sine with light and love always❤️ pic.twitter.com/5y4hMGa0Jw

The Schmooze was ready to unleash a disquisition on the pointlessness of perfectly manicured celebrities in whimsical all-white outfits pretending to be surprised by beachfront proposals. But after sifting through this relationship’s Instagram history and reading each and every one of the validating comments that Lovato and Ehrich instantly append to each other’s posts, we found ourselves kind of verklempt at how much they seem like…well, normal people who fell in love and can’t resist talking about it on social media.

In an era when fewer and fewer stars seem at all like us, these ones kind of are.