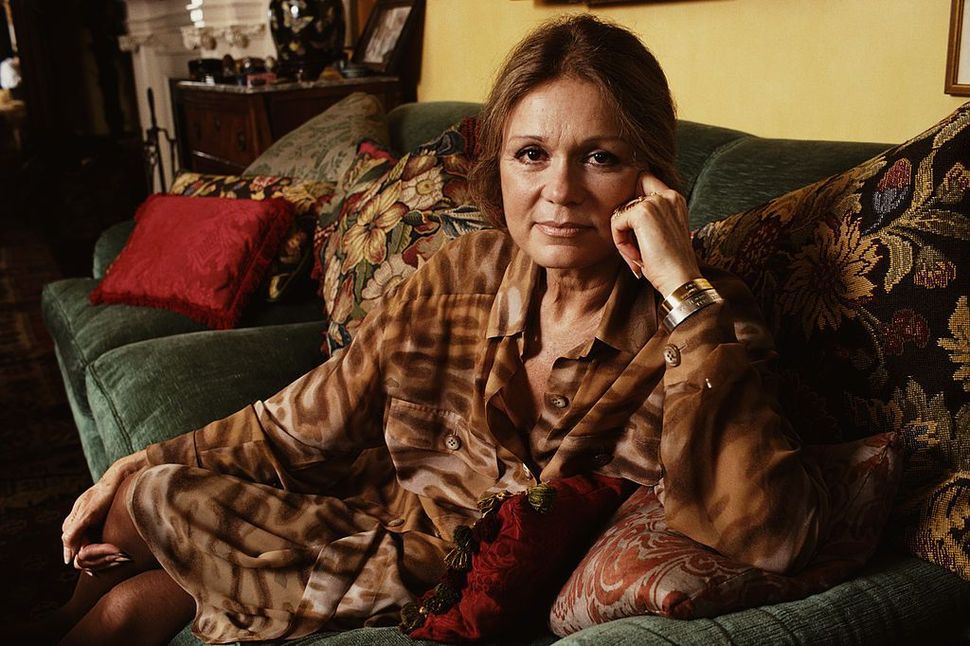 There are almost as many pillows on this couch as there are Gloria Steinem biopics in existence. Image by Getty

There’s a new Gloria Steinem biopic in town — and based on the trailer, it’s pretty much indistinguishable from the last.

If you couldn’t get enough of “Mrs. America,” the FX series that chronicles the battle over the Equal Rights Amendment and the rise of anti-feminist archvillain Phyllis Schlafly, you’ll probably want to devote two hours and 19 minutes to a viewing of “The Glorias,” an adaptation of Steinem’s 2015 memoir “My Life on the Road” that seems to have imported its set and costumes directly from its predecessor in feminist historiography.

Just like “Mrs. America,” “The Glorias” sports a wisecracking Bella Abzug (Bette Middler) bedecked in tiny hats and clashing patterns. It features speeches from lawyer Florynce Kennedy (Lorraine Toussant) sporting her trademark cowboy hat. The wig-and-glasses combination that Steinem (portrayed from youth to maturity by Alicia Vikander and Gloria Steinem) sports as she dissolves the patriarchy with the force of her quick comebacks looks like it was literally spirited off the body of “Mrs. America’s” Rose Byrne.

Notably, the movie’s “Avengers Assemble”-style cast of activist superheroes seems poised to include more feminists of color than did “Mrs. America:” Labor leader Dolores Huerta and Cherokee activist Wilma Mankiller, both of whom feature prominently in Steinem’s memoir, made appearances in the trailer. Janelle Monáe will portray Dorothy Pitman Hughes, the activist whose Esquire studio portrait with Steinem became the symbol of second-wave feminism.

Matching costumes aside, “The Glorias” looks more like high-quality feminist hagiography than, like “Mrs. America,” an investigation of the ways second wave feminism did and didn’t live up to its ideals. The Schmooze looks forward to a day when movies about women’s movements are not obligated to include soaring theme songs and manufactured #thefutureisfemale optimism. In the meantime, we’ll probably spend an afternoon watching “The Glorias.”

”The Glorias” premieres on Amazon Prime on September 30. You can watch the trailer here.