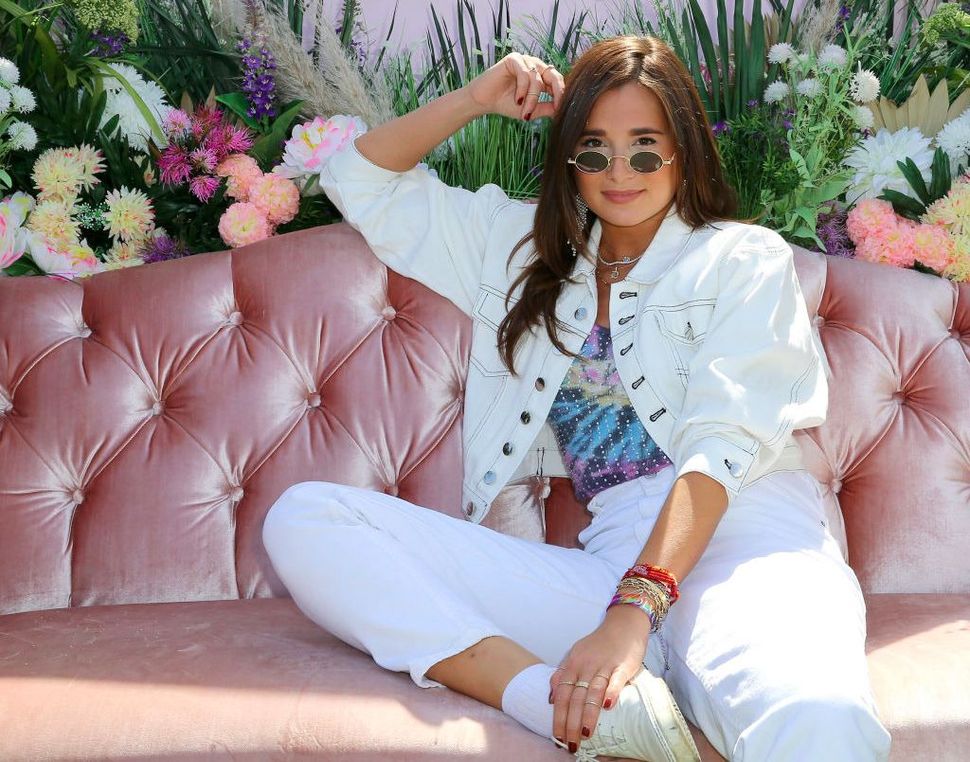 Danielle Bernstein in the before times. Image by Getty

Summer is over, which means most of us can congratulate ourselves on slogging through the season without succumbing to the temptation of attending maskless Hamptons soirees.

Not so for Jewish influencer Danielle Bernstein, who made headlines this week by testing positive for COVID-19 after a social spree in our modern-day East Egg. Here’s what you need to know about the ongoing saga.

Who is Danielle Bernstein?

The designer and personality behind clothing brand We Wore What, Bernstein is on the vanguard of influencer culture. Insofar as influencing is a respectable raison d’etre, her origin story is an impressive one: Bernstein launched We Wore What as a street photography blog while at college in 2011, eventually turning it into a chronicle of her personal style and a vehicle for advertising her own designs. The success of those designs landed her on the 2017 Forbes “30 Under 30” list.

An outfit you can actually play tennis in ? @fpmovement #fppartner

Now, Bernstein has 2.5 million Instagram followers who flock to her account for details of her daily routine, which includes such relatable activities as lounging on concrete in a leather bustier and submerging her diamond-encrusted arm in crystal clear water.

What has she been up to this summer?

A lot! Besides allegedly pirating a mask design from a small business, Bernstein managed, despite the pandemic, to show off her collection of incredibly uncomfortable-looking crop tops in multiple vacation locales. In the past few months she posted snapshots of kosher-for-COVID social activities, like dining alfresco, but saved the racier stuff — like videos of herself dancing maskless at crowded parties — for her more ephemeral Instagram stories.

After receiving backlash for that behavior, Bernstein deleted the posts in question (they’ve been preserved and posted by the influencer watchdog account @influencerstruth), saying she didn’t want to “set a bad example” for followers and clarified that at least one event she attended was not a “party” but a “get together.” (The Schmooze cannot confirm whether coronavirus discriminates between the two).

Since then, an entire Instagram account, @wedonttakecovidseriouslywhat, has sprung up to chronicle what it calls “Danielle’s complete disregard for a global pandemic.”

“There are 2.4 million people seeing her invite people into her home (very high risk) and attend parties and then people will think it’s OK to do,” the account’s anonymous operator told Mashable.

When did she test positive for COVID?

Last weekend, Bernstein revealed that she and her boyfriend had tested positive for COVID-19. In a now-expired Instagram story reported by Insider, she wrote, “Woke up without my sense of taste and smell. My body is extremely sore, particularly my hips and legs … trying to stay hydrated and just take Tylenol.”

Page Six reported that just days before her diagnosis, Bernstein had attended a maskless Hamptons party with 35 to 40 guests, including former Kylie Jenner flame Blake Griffin. An anonymous source told the outlet that other guests were “rushing to get tests.” On her Instagram stories, Bernstein has said that no one who had contact with her has tested positive.

How is she doing now?

Not to worry — she’s fine. Earlier this week, Bernstein said on her stories that she was feeling achy and weak and posted a “cozy couch appreciation post” that included five extremely styled snapshots of her lounging on an impeccable white sofa. She’s now returned to posting pictures of We Wore What’s fall collection.

Why does anyone care if Danielle Bernstein has coronavirus?

An excellent question. It might seem mind-boggling that anyone would devote any portion of their one wild and precious life to tracking an influencer’s summer-long prowl through the Hamptons. But it’s part of a larger phenomenon: Even more than celebrities, influencers have borne the brunt of public corona-shaming during the pandemic. (Bernstein could have taken a cue from fellow influencer Ariel Charnas, who had to apologize for traveling outside New York City after her coronavirus diagnosis.)

That might be due to the liminal position influencers occupy between the truly famous and the rest of us mere mortals. It’s a truth universally acknowledged that no matter how much the economy tanks, Madonna will continue to refer to the virus as “the great equalizer” while sitting in her marble bathtub surrounded by rose petals. But influencers market themselves as being just like us, so it’s extra easy to be infuriated when they don’t follow the rules that many (although certainly not all) of their fellow citizens have accepted.

not danielle bernstein being out and about ALL summer in the hamptons going back and forth to the city and her apartment only to now have covid?? this is why I hate influencers

But the fact is, influencers are not like us at all. They enjoy privileges inaccessible to most Americans, and their entire value proposition stems from the assumption that they live lives that are better, and thus more worthy of attention, than those of their followers.

The pandemic has rendered economic inequality in America — of which influencers, and the pristine sofas on which they recover from coronavirus, are one stark embodiment — both more visible and less palatable. It’s hard to judge what the impact of that revelation will be. But one test is whether influencer culture can survive the virus.