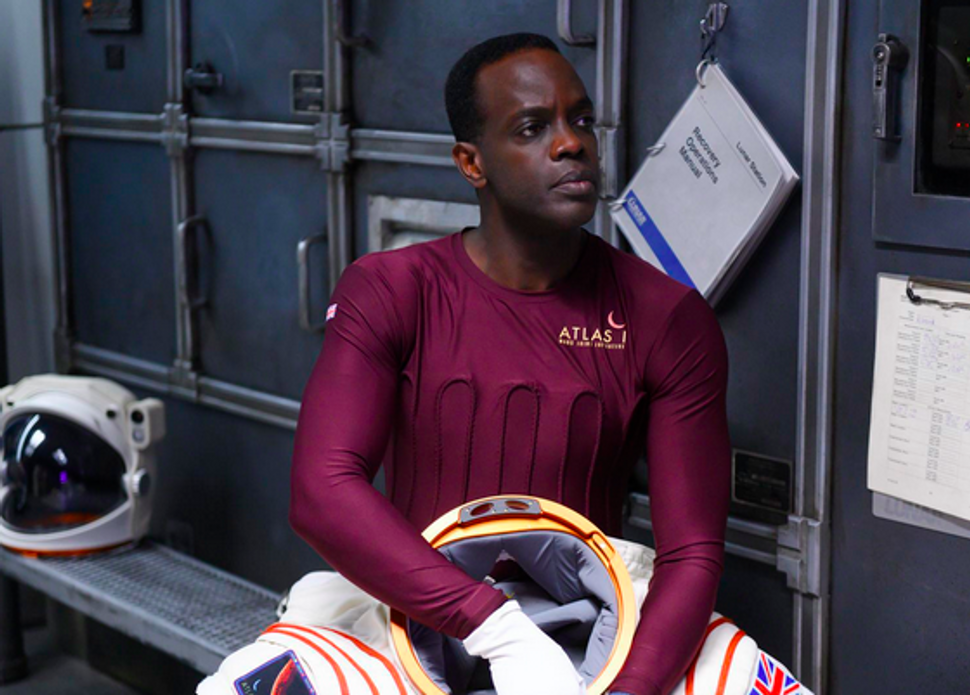 Ato Essandoh plays botanist Kwesi Weisberg-Abban in “Away.” Image by Courtesy of Netflix

America is launching its first mission to Mars — and there’s a chumash on the spaceship.

This may sound like a Space Force PR stunt. In fact, it’s an extremely Jewish subplot of Netflix’s space soap opera “Away.” And that chumash (the Torah in printed, portable form) is the prized possession of one of its main characters, Black Jewish botanist Kwesi Weisberg-Annan.

An astronaut drama with more emotional baggage and crises per episode than “Grey’s Anatomy,” “Away” revolves around a multi-national crew of astronauts led by (of course) glass ceiling-shattering American commander Emma Green, played by (of course) Hilary Swank. Between solving the astonishing number of mechanical problems that plague their supposedly state-of-the-art space craft, the crew spends its time playing chess, dispensing insults that spiral into international incidents, and recalling their origins in lengthy flashbacks, all of which take place in homes that are either Crate and Barrel showrooms or a venture capitalist’s misguided approximation of middle-class life.

That’s how we find out about Kwesi’s Jewish journey, a genuinely touching tale of displacement and renewal. Kwesi, born in Ghana and then orphaned, is adopted by a British couple: Miriam, a Jewish woman, and Sisi, a Ghanaian immigrant who came to Judaism through his wife. Initially distrustful of his adoptive parents, Kwesi rejects their stories of a loving God, astutely wondering why no deity swooped in to help his biological family. Sisi, a gardener, wins him over by explaining that Judaism taught him that it’s humans and their faith in each other that make God possible, not the other way around. To illustrate the point, he brings Kwesi a papaya flower tree, native to Ghana: though it’s not meant for the chilly English climate, father and son slowly convince it to thrive.

Is the deployment of capital-M Metaphors like this kind of clunky? Absolutely. But it’s worth it to see nuanced Jewish narratives delivered by non-Ashkenazi Jews by choice, a rarity in mass-market TV. In “Away,” conversion is never questioned or treated as a sideshow; instead, it’s at the center of Jewish storytelling. And Judaism itself is central to the show’s exploration of faith: when the crew request a prayer during a tense moment in the final episode, it’s Kwesi who comes through with the Traveler’s Prayer (Essandoh joked to the Jewish Telegraphic Agency that he’s going to include his ability to recite it on his resume).

Unfortunately, “Away” bolsters as many boundaries as it breaks, and to arrive at Kwesi’s touching backstory you will have to wade through six episodes of stereotypes about the show’s anti-hero astronauts, Chinese Wang Lu (Vivian Wu) and Russian Misha Popov (Mark Ivanir). A consummate conniver with his eye on Emma’s job, Misha spends much of the show acting out stale Cold War propaganda. Meanwhile, Lu’s scenes seem like they were written by someone who thinks it’s OK to call the coronavirus the “Wuhan flu:” there is literally a scene where she stands by while her husband chastises their son for getting a 98 on his math test.

As the spaceship draws nearer to Mars, both characters deepen and become more sympathetic. But they do so by becoming warmer and more team-spirited — traits that Emma and her stock-photo family embody from the start and that the show implicitly characterizes as inherently American. Case in point: in the show’s final episode, Lu proves her “growth” by telling her son to do what makes him happy, which is both a laudable sentiment and, in “Away’s” cinematic universe, an indicator that she’s unlearning the values assigned to her based on stereotypes about her nationality.

The Schmooze is very much here for Kwesi. But we hope that if “Away” comes back for a second season, it can stop insinuating America invented good parenting and human feeling.