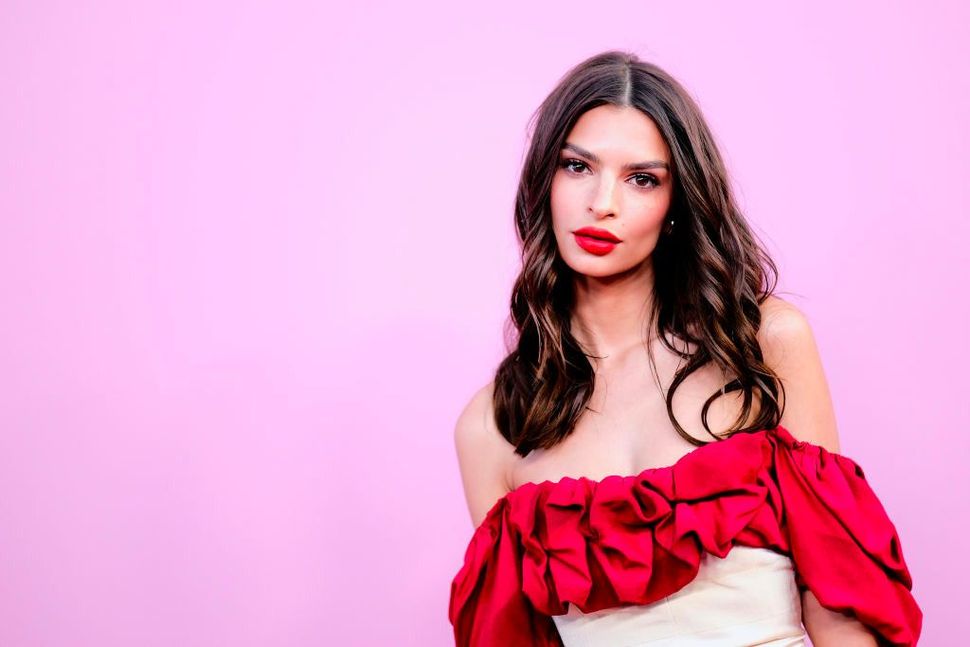 Ratajkowski in 2019. Image by Getty

Ratajkowski wrote that in 2012, she traveled to the photographer’s Catskills home as an unknown 20-year-old model to participate in a photoshoot for which “exposure,” not money, would be the compensation. After plying her with wine before the shoot, she said, Leder told her to pose nude and took advantage of the fact that she was drunk to digitally assault her.

It was a night she tried to forget — until, years later, she discovered that Leder had turned dozens of the photos into a book, to which the Schmooze will not link, titled “Emily Ratajkowski” (and in its second run, even more grossly, “Two Nights With Emily”) which he published without consulting or compensating her.

Reflecting on the difficulty of controlling her own image, Ratajkowski recounts that experience as part of a litany of incidents in which her photographs enriched not her, but more powerful men around her. In 2014, for example, she discovered that she was a subject in artist Richard Prince’s “Instagram Paintings,” a much-lauded series in which the artist created paintings out of real celebrity Instagram posts. One was a nude photo from Ratajkowski’s feed which dated from her first Sports Illustrated shoot, for which she was paid $150. Now it was selling for $80,000 — none of which would go to her.

The Emily Ratajkowski piece is truly courageous. It’s brought home to me how wrongly dismissive I’ve sometimes felt about her and other women who appear to benefit from the ‘privilege’ of staggering beauty.I shouldn’t have needed reminding that all bodies can be hard to live in.

Leder used Ratajkowski’s reputation as a sex symbol — to which he has inarguably contributed — to question her credibility. In a statement to The Cut, he derided Ratajkowski for appearing in Thicke’s music video and posing naked elsewhere — actions that, to him, apparently renders women forever unworthy of seeking redress for any grievance. “You really want someone to believe she was a victim?” he said.

4 things I’ve been reading/listening/watching: 1️⃣All About Love: New Visions by bell hooks. My friend recommended this book to me and it arrived just in time for quarantine. Hooks offers a comprehensive look at something our society both holds in the highest regard and simultaneously shrouds in mystery. She defines love in the first chapter (using M. Scott Peck’s words) as “‘the will to extend one’s self for the purpose of nurturing one’s own or another’s spiritual growth.’” With chapters like “Justice: Childhood Love Lessons” and “Values: Living by a Love Ethic”, you’ll find yourself thinking about love, self-love and positive thinking in completely new and challenging ways. What better moment to take a fresh look at love? As Cuomo reminded us last week: “And at the end of the day, my friends, even if it is a long day, and this is a long day, love wins. Always. And it will win again through this virus.” 2️⃣Another concise (albeit dense) and philosophical book I’ve making my way through is Martin Hagglund’s This Life. Hagglund focuses on the value of time and the power we have in what we chose to do with it. He argues that the finite amount of time we have in this life is what gives life purpose. In a moment when many of us have more time on our hands and less things that make us distracted, this is a nice read to offer perspective and purpose. 3️⃣Music! This morning I remembered a band I loved in high school: Electrelane. I’ve been jamming to them all day. My favorite tracks are Saturday, Birds and The Greater Times. Electrelane makes me feel like getting up and dusting myself off but in a gentle, grounded way. 4️⃣ Pen15. I watched the entire series when it first came out but I’ve found it really nice to revisit these past 2 weeks. It’s hysterically funny and serves as a reminder of how small our worlds are when we are in tweens and how real the emotions and experiences are at that age. Felt like you were in hell in middle school? You got through that and can even laugh about it now!

Ratajkowski hasn’t published much, but she occasionally posts on Instagram about the authors that get her thinking, an eclectic bunch that includes bell hooks, Martin Hagglund, and Hilton Als. In May, she told British GQ that she’s spent her time in isolation working on a collection of essays that explores questions similar to the ones this piece addresses, like the paradox of being “someone who has capitalised on their image and also someone who has been maybe a victim of their image.”

If the end product is anything like this piece, we’ll be linking to that.